Traditional earth diggers and masons, who mined the Bhatti area of the Aravallis for decades, dig in their heels as the Delhi administration tries to throw them out 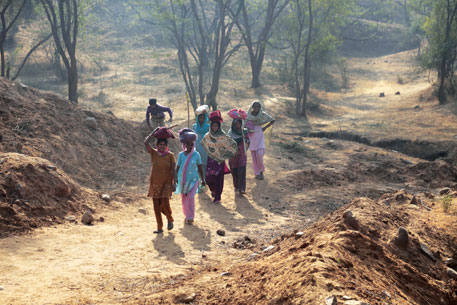 STANDING ON one of the hills near the Asola-Bhatti Wildlife Sanctuary, at Delhi-Faridabad border, Ramji Lal is visibly perplexed. Despite walking through the thorny shrubs and mounds of rocks of the Aravalli hills for almost an hour, he fails to trace the patch of red sand, also called badarpur or bajri, which he used to mine. “I had a licence to mine the hillock,” says the 60-year-old. “But I have not entered the area in the past 15 years.”

Lal belongs to the Od community, the traditional earth diggers and masons who for three decades mined Bhatti area of the Aravalli hills to provide for Delhi’s construction industry. But in 1990, the Delhi administration extended the adjoining Asola Wildlife Sanctuary to include the Bhatti mines area and the common land of nearby villages. Overnight, more than 3,000 families of the Od community, including Lal’s, became encroachers on the forestland and lost their sources of living.

The community, however, does not want to live this impoverished life forever and is determined to reclaim its right on the land under the Forest Rights Act (FRA) of 2006. The law recognises the rights of Scheduled Tribes and other forest dwellers, who traditionally lived in or depended upon the forests. On December 15, 2014, hundreds of Od people participated in a national rally at Jantar Mantar staged by forest dwellers from across the country to demand recognition of their rights under FRA.

In a memorandum submitted to Tribal Affairs Minister Jual Oram, the Od people demanded that FRA should be implemented in Delhi as well. After Mumbai, this is the second major demand for the implementation of FRA from an urban area. The memorandum also calls for recognition of the community as a Scheduled Tribe.

Ods, believed to be descendants of Odang, a king of Odisha, are known for their skill in constructing ponds, canals and embankments and regarded as indigenous civil engineers. Folklore has it that Bhagirath, an ancestor of Ods, had vowed not to drink water twice from the same well. This required him and his fellows to dig a fresh well every day, and that is how they acquired the expertise.

They have been leading a nomadic life since the Mughals ruled South Asia, and were the main workforce behind the construction of major dams and canals in the country during the Nehruvian era. They then migrated to Rajasthan and then to Sindh, Punjab and Pakistan. When Bhatti mines started in 1959, in what is today known as Delhi’s Southern Ridge, thousands of Od families migrated from Rajasthan, Haryana and Punjab to work with private quarrying companies.

“By the 1960s, Bhatti mines became the main source of red sand, silica and stone for Delhi’s construction industry,” says Anita Soni, an anthropologist who has been working in Delhi on the plight of migrant labourers for two decades.

But the mines continued to operate paying scant regard to safety norms, and accidents and workers’ exploitation became the order of the day. In May 1990, a quarry caved in, killing seven workers. Following this, the Directorate General of Mines Safety ordered an indefinite closure of the mines till DSMDC ensured all safety measures in place, removed the piled up debris and rectified the area covered by the mines. The corporation, however, refused to bear the cost involved in implementing the safety measures. It is alleged that the Delhi administration declared the Asola-Bhatti Wildlife Sanctuary the same year to cover up the mess.

The abrupt end of mining resulted in the nonpayment of pending wages, welfare funds and compensation against accidents that occurred at the mines. The government made no alternative arrangement for the lost livelihood of the mine workers.

Worse, all the three mine workers’ colonies that fell within the ambit of the expanded sanctuary were declared “unauthorised”. This included the biggest Sanjay Colony where the government had settled mine workers belonging to Od community in the 1980s and had made budgetary allocations for the development of the colony. This came as a rude shock to the people. “The government had allotted us houses, issued ration cards and implemented development schemes in the colony. We even fielded our candidate who won in the panchayat election,” says Lal. A few years later, emboldened by a Supreme Court order of 1996 to make the Ridge “encroachment free”, the Delhi administration demolished two of the three colonies. The Sanjay Colony has been fiercely resisting the forced eviction till today. The residents’ reluctance to vacate the land has not gone down well with the forest department, which has erected fences to separate it from the sanctuary to “prevent further encroachment”. Residents allege that the colony has been deprived of basic facilities, such as roads and sanitation. Most of the schemes initiated during mining have been forgotten. “They stopped the construction of the higher secondary school eight to 10 years ago. They got the veterinary clinic shifted out of the village six years ago,” alleges Baldev Od, resident of Sanjay Colony.

Asha Dahag, an Od community leader, complains that the forest staff and the members of the ecological task force, a unit of the territorial army kept by the Delhi government to prevent illegal mining and “restore” the forest inside the sanctuary, often abuse women and children who go into the sanctuary to collect firewood.

This is when the authorities have done little to afforest the razed areas or improve the biodiversity in the region. All that one can see in the Bhatti portion of the sanctuary are a few wilted saplings here and there and monkeys (see ‘Simians’ sanctuary’). The authorities have also turned a blind eye towards the land transactions by real estate dealers in the region. “Even the community land like graveyard and the Ramlila Maidan in Sanjay Colony are targeted by property dealers,” says a resident on the condition of anonymity. “Several farm houses have come up on the ridge land in all these years. It is ironical that original residents of Bhatti mines are forced to live a miserable life in the sanctuary while the administration has been allowing outsiders to settle here,” says Roma of the All India Union of Forest Working People (AIUFWP).

The Od community says that FRA is now their only resort. The law not only recognises the rights of the tribals but other communities who have traditionally depended on forests for their livelihood, including nomadic communities. However, the non-tribal forest dwellers, to be eligible for rights under FRA, have to prove their dependence on forests for past three generations or 75 years. Though Ods settled in Bhatti Mines in early 1960s, they claim their rights under FRA because when they came to live here even the forest department was not there. “The land was declared a forest land much later. We came first,” says Baldeo.

“Also in case of a Nomadic tribe, this condition cannot be forced because they have always been on the move. They can’t show any proof for staying at one place for 75 years. They went wherever work took them,” says Roma. This is a unique case where the forest rights are claimed in a municipal area. “The tribal affairs ministry has clarified earlier that in municipal areas, the ward sabhas or the mohallasabhas can act as the authority to invite FRA claims and decide on them in place of the gram sabhas in rural areas. The Ods will be soon claiming their rights to the mohallasabha,” said Ashok Choudhary of AIUFWP, which led the December 15 rally.