Chunks of Intanki National Park in Nagaland are sold for Rs 2,500 a hectare as the forest department looks on. Sayantan Bera visits encroachers’ settlements with his camera 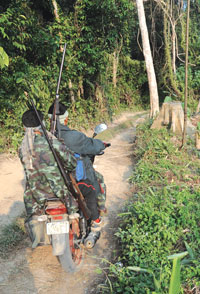 From the moment we drove into Intanki National Park, tucked in the southwestern edge of Nagaland, I kept gaping at the canopy overhead to catch a glimpse of the circus artist of the wild—hoolock gibbons. Unique to Northeast India, the mighty little ape can swing at a speed of 55 km an hour, covering over six metres with each leap. It is known to share the semievergreen and deciduous forests of Intanki with other rare species like great hornbill, barking deer, sambar, sloth bear and not-seen-in-years clouded leopard. But all of them eluded me.

Benjamin Lorin, my guide and general secretary of Tenyimi People’s Organization that works to protect the national park, said very few of these species are left in the forest due to habitat destruction. A quarter of the 20,200- hectare (ha) park has been encroached upon in last 20 years (see map). 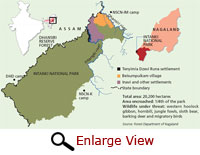 We entered the forest through a motorable road at the northern edge of the national park. There was no checkpost or forest guard. The only interception came from a group of Naga underground militants, NSCN-IM, camping at the forest fringe as per a truce agreement with the Centre. They permitted us after noting down our names and purpose of visit, which we obviously lied about.

After travelling 15 km further into the forest and crossing two swirling rivers and a village, Beisumpuikum, we saw several patches of two to four ha with felled trees. Armed poachers moving on bikes gave us navigating instructions. At a distance there were makeshift huts. A large placard placed outside the settlement read: “Welcome to Tenyimia Dzevi Runa”. It is the latest of the 14 groups of encroachers that occupy the national park. “Several tribes have already settled in the forest. We came here to claim our share of the forestland,” said young men who had just returned to their huts after cutting timber and were huddling around fires.

Most of them were from nearby Dimapur town, the commercial hub of Nagaland, and bought land in Intanki in March this year. “We paid Rs 1,000 per acre (0.4 ha) to the committee of initial settlers who allotted us land,” they said. Assembled under the name of Naga United Village, about 560 people have bought land in this patch of forest since 2009. They have also built a church and a community hall. Though makeshift, the church and community hall serve a purpose. “No one will touch a place of worship in case of an eviction drive. Eventually the land will be ours and the forest department will recognise us,” said the self-styled chairperson of the settlement, stirring fire with a stick. 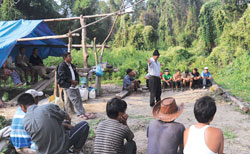 They have borrowed confidence from another colony of settlers, Inavi, at about 8 km from Tenyimia Dzevi Runa. In 2009, the Inavi colony filed a petition at the Kohima bench of the Gauhati High Court challenging the state government over the ownership of the forestland they occupy.

Taking recourse to the Forest Rights Act of 2006, the group claimed they should be granted land titles for the forest patch because they have lived there since 1995, much before the law came into force. The Nagaland government argued that since the petitioners have settled in a national park they should be considered encroachers.

The court rejected Inavi’s petition, saying encroachers cannot take recourse to the forest rights law as they are not the original inhabitants of the Intanki forest. In October the Inavi filed an appeal, responding to which the court ordered status quo until the next hearing in January 2011.

Why the rush to encroach

Niketu Iralu, a septuagenarian Naga social worker, offers a few explanations. Increasing pressure on the limited arable land in the mountainous state in recent years has prompted people to encroach on the northern plains of Intanki National Park. The proximity of the forest to Dimapur has added impetus to the rush. Besides, a fragmented Naga society, where 16 tribes compete to own traditional land and forest resources, is to be blamed, said Uncle Niketu, as the leader working towards reconciliation among different Naga tribes is fondly called.

These explanations only tell half the story. The other half is history.

In 1921, when India was under the British rule, J H Hutton, the deputy commissioner of Kohima, proposed to create a reserve forest in the Intanki- Dhansiri valley. He requested the residents of Old Beisumpui village in Peren district, which belonged to the Zeliang tribe, to donate land. They agreed. The commissioner’s office acquired the land in return for a receipt that entitled the residents to a muzzle-loading gun, two blankets, two bags of rice and Rs 10. Old Beisumpui residents, however, never claimed the payment and in 1923 Intanki was notified as a reserve forest.

A couple of decades later, a group from the village went to Kohima to collect the payment, but were told the receipt was no longer valid. They were unaware that India had attained Independence. In 1975, the Nagaland government notified Intanki as a wildlife sanctuary.

The first instance of encroachment took place in 1984 by a group of Beisumpui residents who had donated land for Intanki forest. They encroached on the land and named it Beisumpeikum. Despite several eviction drives, they returned to the forest. In 1994, a year after the Centre notified Intanki as national park, the state government tried to settle the matter. It agreed to grant land titles to Beisumpuikum residents in exchange for their land lying outside the national park.

Officials in the state forest department say though the deal is not finalised, it encouraged people from other villages to encroach the park.

Insurgency is also to blame

A long-drawn-out conflict between the Centre and warring insurgent factions has also promoted encroachment.

Preceding the notification of Intanki as a reserved forest in 1923 another history was taking shape. During the First World War, the British government sent several hundreds of Nagas to work as porters and aides in France. On returning home in 1918 they got organised and the Naga nationalist movement was born. The movement continued even after the Independence as the group demanded autonomous status for the region inhabited by Naga tribes.

Nagaland got statehood in 1963, but insurgency continued. It led to an internecine war after the group split into two rival factions—NSCN-IM and NSCN-K—in 1988. The government signed ceasefire agreements with the factions in 1997 and 2001. These agreements had fallouts on Intanki.

The ceasefire agreements, activist Lorin said, gave the groups designated camps in areas bordering the national park. The NSCN-IM now camps on the northern side of the park, the NSCN-K camps on the eastern side and an underground ethnic outfit in Assam, Dimasa Hasao Dasam, camps on the south-west of the park, bordering Assam. These camps have encouraged encroachers to maintain their political clout, Lorin added.

A status report prepared by the forest department in 2009 lends credence to Lorin’s statement. It says: “In December 2002, the Monglumukh forest colony was occupied by the NSCN-IM by declaring it as a designated camp, and since then the mobility of field forest staff was restricted as a result of which much damage has been done to the national park.”

Government officials who own teak plantations around the national park also encourage encroachment, said Liangsi Niumai of the Care Centre for Environment and Rural Poor, a nonprofit in Nagaland.

Chief Wildlife Warden of Nagaland, K S Shashidhar, blames encroachment for the poor state of Intanki national park and its disappearing wildlife. Hunting and poaching are going on across the state. A yearly central assistance of Rs 25 lakh and 85 forests guards are enough to protect the park, Shashidhar said. “But most of our energy is concentrated on evicting encroachers. We can focus on improving wildlife habitat only when the problem is solved,” he added.

As I was leaving Nagaland, I visited Rangapahar Reserve Forest, adjacent to Dimapur. After 50 years of rampant encroachment, the forest, which earlier covered over 8,800 ha and was home to several rare species, has shrunk to 176 ha. The government recently declared it a zoological park. There one can buy a ticket for Rs 10 and see the lone hoolock gibbon—housed in its rescue centre.