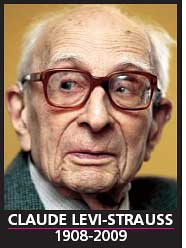 The Tristes Tropique s statement encapsulates the anthropologists persona: introvert, contemplative and self-reflexive. To the members of his team in Paris, the image he evoked was the nearly permanently closed doors of his study. But they also considered him secretly warm and possessing a delightful sense of humour. One of his staunchest critics, the Cambridge anthropologist Edmund Leach doubted whether Levi-Strauss, during his fieldwork in Brazil, could have conversed with any of his native informants. But Leach never grudged his prestige.

Before Levi-Strauss writings, anthropology regarded primitive societies as intellectually unimaginative who base their approaches to life and religion on the satisfaction of urgent needs for food, clothing and shelter. Levi-Strauss rescued his subjects from this limited perspective. Many, including his staunchest critics, were influenced by the Brussels-born French anthropologists intellectual output.

Levi-Strauss could dehumanize kinship into a jumble of arcane mathematical diagrams. But while studying the culture contexts of cooking, he turned anthropology to a work of art. Many say he wrote within the tradition of French Romanticism. But Levi-Strauss was no tribal romantic. For him, the savage was not noble or intrinsically close to nature.

Last year academies in 25 countries celebrated his centenary, but Levi-Strauss preferred to spend a quiet day at home. He was sprightly in spite of his age and gave regular TV interviews. He rarely spoke well of the French state, but it lionized him as one of Frances foremost intellectuals.