Water scarcity in a Faridkot village 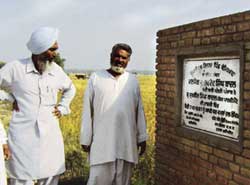 It isn't everyday that a villages turns down a state government offer to provide drinking water. Kameana, a village in Faridkot district of Punjab, has done exactly that. The government has tried for long to build waterworks to cater to Kameana, but the villagers have resisted. And the project's fate is uncertain. Those who don't like the government plan prefer a water supply system they have developed over the years.

But the village is split over this decision, with local politics dictating varying positions.

Kameana has faced drinking water shortage for two decades. The groundwater is extremely saline, and the state government doesn't supply water here. The department of water supply and sanitation does supply canal water to most villages in the area; officials say all the 163 villages in Faridkot have been connected to the waterworks at one time or another. But the waterworks in some villages, like Middu Maan, have fallen to disrepair. Only 81 waterworks are currently functional, and these are unable to meet the water requirements of all villages.

Kameana residents first requested for safe drinking water in 1991. The government had plans to get water for Kameana from the neighbouring Kilanau, but enough treated water was not available to supply both villages. In 1997, separate waterworks for the village were envisaged and a foundation stone laid. But nothing happened thereafter. The villagers got tired and devised their own water system.

In 1998, the Shiromani Akali Dal, the party in power then, gave the Kameana panchayat Rs five lakh for setting up a borewell. The panchayat contributed another Rs 2 lakh in cash. Villagers offered free labour. They dug a 25-metre-deep borewell close to the Sirhand feeder from river Sutlej. The water seeps in from the canal, getting cleaned in the process. The borewell feeds an elaborate pipe network that takes water to every house.

Gursewak Singh, a hired technician, oversees the system. At 7 am everyday, he switches on the 10-horse power submersible pump. There are about 300 water connections in the village of 400 houses. The village has been divided into three sections to ensure equal distribution. Valve cocks have been installed to direct the water to each of these sections. Singh returns to the village to manage the valve cocks and returns at 5 pm each day to shut the pump down. He earns Rs 1,500 from the village. He also attends to special needs arising out of weddings and social functions, and maintains the pump and the pipelines. The upper caste villagers pay Rs 30 per month. The dalits, who are poorer and have collective connections, pay Rs 15 per month. This generates Rs 8,000 per month, enough to cover the total cost.

The system was working smoothly until May 2005, when the department stepped in with the long-awaited funds from the National Bank for Agriculture and Rural Development (nabard). It sanctioned the contract for building the waterworks. The department asked the village panchayat for the land they had already identified in the village in 1997. This land was unavailable. The panchayat had leased out the land for a sum of Rs 35,000 for farming. The total sum of Rs 46 lakh would have lapsed by March 31, 2006, if work wasn't startedimmediately. Pressure began to mount on the occupant, Gurdip Singh, a former sarpanch's brother, to vacate the land.

He went to court on February 15, 2006, asking for time to harvest his crop standing on the disputed land. On March 13, 2006, the court directed the public health department to wait until May 5, 2006. The panchayat communicated the verdict to the department of water supply and sanitation on March 23, 2006. Meanwhile, the court suggested that the money be put into a bank account. But government officials say there is no such provisions under the nabard scheme. Quite likely, the money offer would lapse. Not all villagers are happy with this. They are divided over the issue of the nabard waterworks. It is difficult to judge who has a majority vote in the matter. The group that supports the waterworks claims the occupants are not interested because they have been using the fertile land for their own benefit. Those occupying the land say there is sufficient water in the village, and that the other group is only interested in making money from construction work.

On their part, the government officials say they want the construction to go ahead because water from the borewell is unsuitable for drinking on account of high fluoride content, and that they have been receiving complaints. On August 7, 2002 Gursewak Singh, headmaster of a local school, had written to the authorities that safe drinking water was not available for the children and that the waterworks was needed.

On August 14, 2002, department officials wrote to the district collector, saying the water from the borewell was found unsuitable for drinking. The former sarpanch, Avtar Singh, also got the water tested by a government recognised laboratory, the Patiala Clinical Laboratory and Water Research Centre in Muktsar, on August 20, 2002, and found that the water was "fully satisfactory for drinking " under the specifications for potable water. According to a department official, the seepage is not enough to provide sufficient water to all the people in Kameana. The pump just draws in unprocessed canal water and this is unfit for drinking.

The panchayat, under the new sarpanch Charat Singh of the Congress party, reiterated their demands for the waterworks on December 10, 2003. On the other hand, the same body spent Rs one lakh more to get a 24-hour supply of electricity in 2005. On November 29, 2005 the panchayat wrote to the department saying that instead of creating the waterworks, the government should just install an overhead tank to make delivery easier. People in the village say that most of the earlier sarpanchs were against the waterworks. The reason the present sarpanch has written to the government for the waterworks is because he is being threatened by the administration, they allege.

The group opposing the waterworks says the existing waterworks are not working efficiently. Some problems are present because water comes through open drains to the reservoir and these are often misused. The reservoir itself is not walled and donkeys, dogs and cattle are often found swimming in it, they allege. Also, the Sirhand feeder gets a lot of industrial waste and domestic sewage from Ludhiana and Ropar and the villagers doubt the treatment capabilities of the waterworks.

There are reports that untreated sewage is being released in the Sirhand feeder. The existing waterworks are ill-equipped to clean up this kind of dirty water. In Kilanau village, the pump for injecting chlorine into the water, too, has not been working for around one and a half months. As a result, the water supplied by the waterworks is used only for cleaning purposes and the village women fetch drinking water from the handpumps next to the water reservoirs. The water in these handpumps are cleaned in the same way as the canal water. Kilanau did not get water for eight days as the electricity board had cut off the supply due to non-payment of bills.

In some villages, the responsibility of the waterworks has been recently handed over to the panchayats and this has led to more problems. For example, electricity supply to 50 per cent of the waterworks was cut off recently because of non-payment of bills. Most of the time, the bills had been accumulating for years and the government had just passed on the dues to the panchyat, reveals Kushaldeep Singh Dhillon, an mla from the Shiromani Akali Dal.

According to Avtar Singh Brar, a Congress mla, just because some of the waterworks are not working well does not mean that the present one will also not work. If people can take care of the existing borewell system, they are capable of running the waterworks effectively, he says. "If the government is granting money for the waterworks, people should avail of it," he adds. Because of unsafe water, at any given time there are around a dozen cases of jaundice in the area, he says.

But Dhillon suggests that the existing system should continue but the quality of the water should be checked from time to time. Instead, efforts should be made to ensure that the panchayat is given the responsibility of taking care of the waterworks and adequate training is provided.

The villagers are of the opinion that the money sanctioned for the waterworks can be used for other purposes such as providing water to other villages, roads, schools or the development of a sewerage system. Wastewater has taken over nearly two hectares of land in the village. During rains, this water spreads all over, causing various diseases. However, this is not possible, as the money has been earmarked for a specific purpose.

The deputy collector, Alok Shekhar, treads the middle path. He says, "Let the private water distribution system continue alongside the waterworks in Kameana." This would exert a double payment burden on the villagers.