Pollution under control tests for diesel vehicles are a big farce 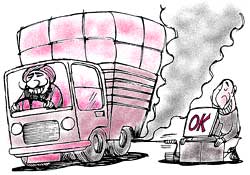 Most diesel vehicles in India do not meet the smoke density limit (65 on the Hartridge scale). But that's no cause for concern for owners. It's quite easy to carry home a pollution under control certificate (pucc) in India even if your vehicle does not conform to norms.

We at the Centre for Science and Environment know full well what a farce the pollution tests are. But we had hoped the new tests that came into effect from October 1, 2004 would improve matters. The tests were definitely more stringent: the earlier tests measured only the smoke emanating from the vehicles. But the new norms stipulated measurement of the warm up temperature of the engines as well as the measurement of engine speed. Moreover, the new smoke measurement instruments are controlled by sophisticated software -- taking control away from unscrupulous pollution control operators.

Let us understand how this system works. Diesel vehicles are tested in three steps. To begin with, the engines are warmed up and only if their temperature goes above 60 c does the instrument proceed to the second stage. This is called the flushing cycle: the exhaust is cleaned and the engine's revolutions per minute (rpm) is estimated. This approximation is checked against the actual rpm and smoke levels at the third stage. The instrument is programmed in such a manner that it cannot bypass the first two steps. All this lured us into believing that the days of taking the system for a ride were finally over. After all, it was the instrument which now controlled the tests, and not the operator. But how wrong we were! The equipment did indeed control everything, but the data that has to be recorded in it was still the preserve of the operators. Let us visit a pollution control centre to understand how the system can still be bent.

Pollution control operators and vehicle owners call this jugaad (a contrivance). To begin with, the engine oil temperatures are not measured at all; the instruments sensors are placed on a hot water bottle. This makes sure that the instrument proceeds to its next task even if the vehicle engine has not attained the necessary temperature! But sometimes sensors touch an inordinately high 255 c. What do our adroit operators do then? They simply use a cold water bottle to lower temperatures.

The most interesting aspect about the jugaad is to record the smoke levels without measuring the smoke itself! The smoke meter has an electric bulb on one side, and a smoke detector on the other end. As smoke blocks the reflection of the bulb on the detector, the meter starts to give its readings. But our dextrous operators know how to make this instrument pliable. They open up the the electric bulb side of the instrument, and hold it away from the meter for a fraction of a second. As less light falls on the detector, the machine assumes that smoke has entered, and starts giving readings. The hapless instrument, of course, cannot fathom that the light has been blocked artificially -- and not by smoke. This is repeated several times to get an arithmetic mean of four readings -- a requirement for smoke measurement! Yet another method to record lower levels of smoke is to half-connect the probe to the smoke meter -- though the probe is properly inserted with the clamp in the exhaust! This paves the way for smoke to escape.

My companion, an engineer who designed the coding for this instrument, rued, "I feel cheated and betrayed. Three years of research work on this instrument has just gone down the drain."

Mind you, the standards require that the smoke readings should not show a linear decline. It also states that the peak smoke density values are situated within a bandwidth of 25 per cent of the arithmetic mean of these values or within a bandwidth of 0.25 k -- whichever is higher. But our deft operators can circumvent that as well.

That is a trade secret, says one of them. Helpless as I was with their genius, the only good news that came out of the tour was that the operators have not yet found a jugaad for measuring engine rpm. But given their dexterity, it's just a matter of time.

I hope I am wrong.