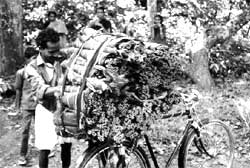 Kerala is setting the trend for the rest of country in more ways than one. Recently, an action plan was formulated to protect the state's biodiversity. The Peechi-based Kerala Forest Research Institute ( kfri ) has drafted the Biodiversity Conservation Order 2000, which has been approved by the Kerala biodiversity committee, set up under the aegis of the National Biodiversity Board.

This effort is to document the state's unique biodiversity and traditional and folk knowledge. The order has been formulated after soliciting opinions from various sections of society including mediapersons, scientists, panchayats , and institutes involved in conserving folk knowledge.


A Biodiversity Fund will be set up, which will be run by the state biodiversity board. The board will handle the finances of programmes implemented under the order. The Union and state government will fund the initiative, which will also benefit from taxes on commercial products that use bio resources. Based on the assessments of the state biodiversity cell, the board will disburse these funds to the district panchayats . However, there are problems. It is impossible to lay down tax provisions through an order, says L Kizhisseri, a correspondent with the New Indian Express and a key member behind the drafting of the order. The other problem is whether there should be a penalty on environmental pollutants or a tax. M Shivadasan, professor at the University of Calicut says: "One can have penalty for using environment pollutants. But taxing something that is already identified as an environmental pollutant is not a right precedent. It is not an effective disincentive."

A conscious attempt has been made to involve Panchayati Raj institutions -- the Fund will operate at the district, block and village level. Decentralisation seems to the buzz word: the panchayats will charge people collecting bioresources that are grown in public lands including forests and government lands. The district biodiversity cell will prepare the list of bioresources and other guidelines. However, the clause of collecting fees has already generated considerable debate. "The clause on collection of fees is anomalous, mainly because it necessitates and pre-supposes, to collect fees from research institutions like Zoological Survey of India ( zsi ), kfri , Tropical Botanical Garden Research Institute ( tbgri) , which are already engaged in biodiversity research for national benefit," says a scientist from zsi . Many scientists feel that these institutions should be clearly out of the purview of the collection of fees while "procuring biological material required for their studies." On the other hand, the panchayats will not be able to collect fees without legislative authority. The conservation order is not a legislative authority. A comprehensive view of the order shows that before it is properly implemented, the Forest Act may have to be amended. In the case of reserve forests, for instance, the panchayats will not be able to charge a fee as it will be deemed illegal under the present legal system.


The nodal point of the conservation order revolves around the biodiversity register programme. The elaborate model -- involving local-level institutions, villages, hamlets, schools and other training institutes -- is quite ambitious and at the same time is different from the 'royalties approach' practiced by some research institutes like the tbgri . The district biodiversity cell will have a databank, which will act as a repository of bioresources and the folk or traditional knowledge. The order states that once the information is a part of the databank, no transfer of knowledge will be possible without the permission of the district biodiversity cell. In the case of transfer of knowledge without permission, the biodiversity cell can claim compensation. Though details have not been worked out, there is a proposal to set up an authority to "resolve conflicts and grievances". Moreover, providing information on the bioresources or the knowledge to the biodiversity register has not been made mandatory. Instead, the information can be given under mutual agreements. These range from material transfer agreements, information transfer agreements with commercial interests or research and development institutions. The monitoring of the bioresources will be done by the gram panchayats .

P S Easa, a senior scientist with kfri says, "Changes can be made once the order takes effect, but only practical tests will show the validity of the conservation order." A capacity building exercise to train villagers as parataxonomists -- laypersons trained by research institutions to identify flora and fauna -- adept in identifying the bioresources of their area is also on the anvil. Ernakulum district has already started working on this (Read: Documented secret ).

The order seeks to achieve a lot, therefore, the implementation of the order will require changes in many areas. Moreover, the order provides for the functioning in congruence with the State Biodiversity Act and the Union Biodiversity Act. And this clause alone might put the working of the order into jeopardy. The wait for the Biodiversity Bill to get cleared from the hallowed portals of the Parliament has taken considerable time and might prove to be a frustrating one. However small initiatives like this one offers a ray of hope.