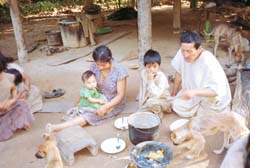 It's quite well-known that indigenous communities share an intricate relationship with their environments. Their understanding of plants, also called ethnobotanical knowledge, is crucial to the health of these communities. Researchers from four different universities--Northwestern University, Illinois, universitat Autonoma de Barcelona, Spain, University of Georgia, Athens, and Brandeis University, Massachusetts, studied the Tsimane tribe in Bolivia and found that there is a correlation between mothers' knowledge about plants and the health of their children (see box Indigenous healthcare).

However, with pharmaceutical industry regularly looking for leads to drugs from plants, it is possible that the Tsimane community could be in the early stages of market integration. And then, access to plants could get remote."Tribal people who get food from the forest have fewer vitamin deficiencies and are generally healthier. But in areas where rice has been introduced through the public distribution system, the people are less healthy," says Nirmalendu Jyotishi of the Regional Centre for Development and Cooperation, Bolangir, Orissa. Migration too affects a community's ability to use the natural environment to their advantage. Often, people have no knowledge of the things that are available to them in a new area.

Will communities lose their knowledge this way? There are studies that show that perception also affects interaction of people with plants. A study of the dietary habits of a rural community in Spain shows that though wild foods were traditionally important as a supplement to the diet, only a few people continue to consume them. "While it is difficult to estimate the time it would take for a community to lose its knowledge base, it could happen in a generation," says Craig K Harris, department of sociology, Michigan State University.