Koyna Wildlife Sanctuary is threatened by ceaseless loot of land, with government help 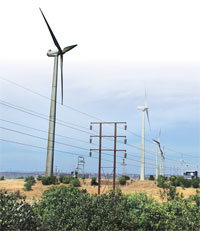 Electricity wires hang dangerously over a bituminous road. Unending rows of gigantic windmills look down from where, perhaps, a tiger should have kept an eye on its territory. Instead of birds, turbines create a humming noise. Trees are hardly in sight and one has to be lucky to spot wildlife. The Vankusawade plateau in the Koyna Wildlife Sanctuary in the Western Ghats of Maharashtra hardly looks like part of a wildlife sanctuary.

Situated in the Patan and Jawali tehsils of Satara district, Koyna was declared a sanctuary in 1985. It is a part of the Sahyadri Tiger Reserve, declared in January 2010, and is proposed to be its core area. The government has proposed to UNESCO to enlist the sanctuary as a world heritage site.

Bedecked with dense forest and rich biodiversity, the 42,355-hectare (ha) sanctuary now also has 215 windmills and 10 tourist resorts. An earthen dam is under construction and trees are being felled rapidly. Land inside the sanctuary is up for sale. More than 900 land deals have been finalised since 1985. And, it is the sanctuary authorities who have helped make a lot of this possible. The road, the dam and a resort belong to the state government.

The Wildlife Protection Act, 1972, bans infrastructure development and sale or purchase of sanctuary land. An RTI application filed by Karadbased non-profit Creative Nature Friends in March last year revealed that 215 of the 1,240 windmills in Satara lie inside the sanctuary precincts. They are owned by industrial powerhouses like Tata Motors, Bajaj Auto and pan masala giants Dhariwal and Ghodawat. Construction began in 1999-2000 and Rs 500 crore was spent on the 215 windmills.

These can generate 80 MW of power. Nana Khamkar, a member of the non-profit, filed complaints in the Bombay High Court in August 2010, and the Central Empowered Committee (CEC) in October that year. The CEC gives recommendations to the Supreme Court on forest-related matters. On the high court’s directions, assistant conservator of forest of Koyna issued eviction notice to owners of the windmills on November 20 with a 60-day deadline.

The Indian Wind Energy Association filed an application in the court stating that owners of the windmills had taken all the required permissions. It stated that the state government neither objected to nor warned them of the land being inside the sanctuary. The court has directed the wildlife department to hear the windmill owners before taking a decision on eviction.

The RTI replies also revealed that 10 resorts were built inside the sanctuary between 1997 and 2007. Of these, one belongs to the Maharashtra Tourism Development Corporation. Close associates of the state’s politicians and businessmen are said to own the rest. No permission was sought from the wildlife department for the resorts.

In 2006, a 6.5-kilometre road was laid inside the sanctuary under Pradhan Mantri Gram Sadak Yojana. The RTI replies revealed massive felling of trees in the wildlife corridor between Koyna and the nearby Chandoli National Park. Last month during its visit to the sanctuary, the CEC noticed a dam under construction near Humbarli village. It is being built since 2001 at a cost of Rs 6 crore by the Kanhar Development Division, another state government agency. Permission from the wildlife department, again, was not sought.

It is not just construction, sanctuary land itself is up for sale. “Till about two months ago ‘land for sale’ signboards were common in the sanctuary. They were removed and sale of land stopped just before the CEC’s visit,” Khamkar said. Records show 950 first-hand land transactions since 1985. It is estimated that 10 per cent of the sanctuary land, which comes to about 4,000 ha, has been sold or encroached.

Dulta Chalke, resident of Vankusawade village inside the sanctuary, said the sanctuary sees more investors than tourists. “Two to three buyers come every day to negotiate deals with villagers. Buyers offer price as high as Rs 2.5 lakh per acre (0.4 ha). Around 20 per cent of the villagers have already sold their land,” he said.

The mad rush for land in Koyna is because of its potential to emerge as a tourist hub. The lush forest around the backwater of Koyna dam makes the sanctuary a much sought-after tourist destination.

The high altitude of the eastern plateau (1,000-1,250 metres) accompanied with high wind speed makes it an ideal location to install windmills, which in turn add to the tourist attraction. Considering this, and to reduce tourist pressure in Mahabaleshwar, the state government envisaged a Rs 678-crore New Mahabaleshwar Hill Station project near Koyna in 2001. The project, finalised in 2004, proposed to include 14 villages of the sanctuary.

Soon after the project was envisaged in the power circles, there was a sudden surge of land deals. Records of Patan tehsil show 70 per cent land deals were finalised after 2001 (see map). Registered under different names, the actual buyers are politicians, businessmen and Bollywood stars, sources said. 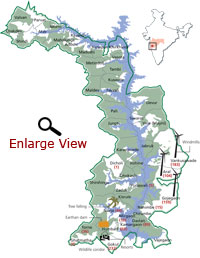 Instead of following the law, the revenue department allowed sale of land, while the wildlife department preferred to look away. In fact, government agencies developed the sanctuary’s infrastructure to facilitate the investors, allege activists. The bituminous road was to show infrastructure in the area to help windmill owners get clean development mechanism approval from the United Nations Framework Convention on Climate Change, Khamkar said. This helps them trade in carbon credits in the international market. “The minor irrigation reservoir in Humbarli village was constructed to ensure water supply in the resorts,” he added.

The sanctuary itself has not been notified despite being declared 25 years ago. As per the wildlife Act, the subdivisional officer (SDO) must prepare a report of the rights of people living in the sanctuary area and issue the final notification. In the report, prepared in 1998 and amended twice in 2000 and 2002, the SDO proposed to exclude nonforest area of the 14 villages. These were the villages where maximum land deals took place later. The exclusion is on hold as final notification has not been issued yet. Once out of the purview of the wildlife Act, the area will be free to be exploited.

The exclusion also threatens to ruin the sanctuary’s ecology. The proposed land surrounds the backwaters of Koyna dam and prevents its siltation. The dam is Koyna’s lifeline. Kishor Rithe, president of Satpura Foundation, who is also member of the Maharashtra State Wildlife Board and the National Board for Wildlife, said, “The fact that the wildlife department is advocating exclusion of the area shows there are political interests in the sanctuary and the authorities are acting to protect them.”

M K Rao, conservator of forest of Kolhapur division and officer in-charge of Koyna sanctuary, said the land deals were because of “ignorance among the frontline staff”. “Wildlife Act has been amended so many times that the staff was not aware of them. They were also poorly informed about the boundaries of the sanctuary. The staff did not know about the irregularities,” Rao said. The RTI reply accessed by Khamkar shows the department knew about the constructions.

In 2002, an offence was booked by range forest officer in Koyna against 159 windmill owners. In 2004 when the bituminous road was being constructed, the conservator of forest in Kolhapur wrote to the executive engineer of Satara informing him about the prohibition. But no action was taken.

“We had been watching windmills and resorts for years,” said Khamkar, “but nobody knew they were inside the sanctuary. It was only after we saw the map of Sahyadri Tiger Reserve which had Koyna as its core zone that we doubted the activities”. When the CEC team visited the sanctuary, the authorities took them through a route that was not encroached. The way to the dam under construction in Humbarli village was blocked by boulders.

The state government declared Sahyadri Tiger Reserve comprising Koyna sanctuary and Chandoli National Park in January 2010. The Koyna sanctuary now encompasses a critical tiger habitat. A part of the Congress-NCP government has opposed constitution of the reserve as it may put a spanner in the New Mahabaleshwar Hill Station project. 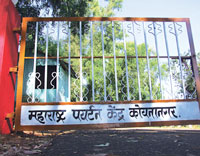 Officially, Koyna has three tigers and Chandoli six. Villagers say there are more. Land deals, tourist resorts and massive felling of trees near Navja, Gokul and Humbarli villages have shrunk the wildlife corridor between Koyna and Chandoli putting the big cats at risk.

The sanctuary has been declared an Important Bird Area by BirdLife International, a global network of bird conservation organisations. It has endangered bird species like red-headed vulture and white stork. But the windmills have disrupted birdlife.

Their constant drone keeps the birds away. “This is evident from the fact that the plateau is full of rats now,” said Mohan Maruti Maskar Patil, a journalist in Satara who studied the impact of windmills on wildlife. The Vankusawade plateau is also known for its unique biodiversity.

“The overhanging cliffs, fallen boulders and small caves provide shelter to endemic species like Koyna Toad and the rare Draco (gliding lizards). The Draco has not been seen around in many years as windmills encroached its home,” said Rohan Bhate, a naturalist in the region.

The wild animals of Koyna, weighed down by dense canopies and high rainfall, move towards the plateau during monsoons. But the windmills force them to the villages nearby leading to conflicts with people.