Is the Pushkar conservation project off the mark?

The Pushkar lake dried after dredging last summer. The dredging was part of a lake conservation project funded by the Centre and the Rajasthan government.

The Rs 48-crore project aims to spruce up the catchment and concretize existing channels that carry the run-off. The latter is to curb losses through evaporation and seepage when water flows from the catchment to the lake through feeder channels after rains. The four-metre-deep dredging was done to accommodate the water that might flow into the lake.

But, what happened to the four feet of water (1.2 m) that was in the lake before the project began in January 2009.

During dredging, said R K Nahar, a geologist formerly with the state groundwater department, a layer of pure clay was dug out, which resulted in seepage. But V K Sharma, executive engineer with the Urban Improvement Trust, the implementing agency of the project, said the loss was natural and not because of negligence.

The agency hired consultants for a soil survey, which gave clean chit to the dredging operation. Except for 4 per cent of the lake area where there was likely seepage, six-metre-deep clay was in the lake after dredging, the survey report said. It recommended laying a natural clay layer of 300 mm in the area. An official of the trust, though, admitted that percolation increased after the clay layer was disturbed. So, they decided on laying 0.3-0.7 m clay in 40 per cent of the lake bed.

Offering another explanation, O P Hingar, team leader of WAPCOS, consultants for the lake conservation project, said the four-feet of water in the lake was maintained through tubewells. “People did not know water from the tubewells was discontinued for dredging. So they were surprised when the lake dried,” he added.

But Pushkar is a groundwater-fed lake, argued Nahar, and “the authorities must recharge groundwater, not concretize feeder channels”.

Earlier, rains would recharge groundwater and even in the dry season several springs would flow towards the lake. These natural sources are all dry now. The withdrawal of groundwater is three times more than its recharge, according to a study by the state’s groundwater department.

Drilling machines around Pushkar are common, said Nahar. “The lake has shrunk to a third of its size. What used to be two-thirds of the submergence area is now encroached by hotels and cultivable land,” he added (see map). Amal Kar of the Central Arid Zone Research Institute in Jodhpur supported the concretization drive. “We cannot stop withdrawal of groundwater.

Maximizing surface run-off reaching the lake in that case is a good effort,” he said. Besides, said Hingar, the surface run-off is limited due to sandy soil. The inlet channels are not well graded paths and the feeders have depressions, which lead to higher evaporation and seepage losses; “94 per cent of rainfall in the lake catchment is lost enroute,’’ said Hingar.

The 21.87 sq km lake catchment records an average rainfall of 400 mm annually. Assuming 400 mm rainfall is accounted for, 21.87 sq km will generate 8.748 million cubic metre of water. The deepening of the lake by four metres has increased its capacity from 0.79 to 1.196 million cubic metres, which is 13 per cent of the total generation capacity. The lake will spill over if more than 13 per cent of all rainfall in the catchment finds its way to the lake. “After improvements to the catchment we intend to tap more than this,” said Hingar, “to ensure we have carryover water for the next year.”

Concretizing channels is foolish, because the streams also recharge groundwater, said Tej Razdan, general secretary of the non-profit Lake Protection Society in Jodhpur. “In their attempt to top up a deepened lake they have destroyed the ecology of the area,” he added. 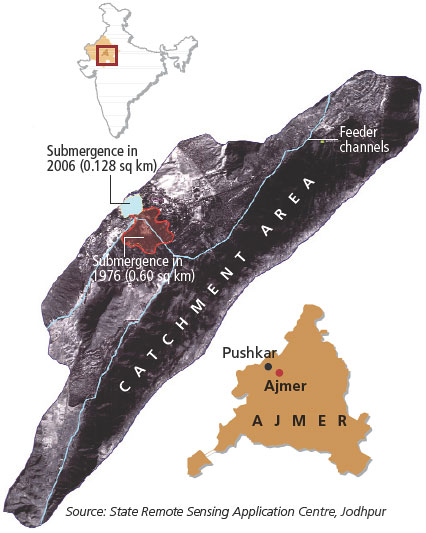