Landless poor march to Delhi. Then what?

Landless poor march to Delhi. Then what?

Faced with 25,000 landless people from across the country marching up to parliament on October 29 to register their protest, the United Progressive Alliance (upa) government announced the creation of a committee on "State Agrarian Relations and the Unfinished Task in Land Reforms". The union minister of rural development, Raghuvansh Prasad Singh, made this announcement at the Ramlila Ground, where the demonstrators were held back by the police to prevent them from marching on to Parliament House.

Singh will head the committee -- to be set up within a month -- that will draw up a land reforms policy and suggest measures to enforce land ceilings, prevent dispossession and expedite disposal of land-related litigation. Half the committee members will be non-officials, it was agreed. It will give a report to what will be called the National Land Reforms Council, headed by the prime minister.

The march began on October 2 from Gwalior in Madhya Pradesh and covered 350 km to reach New Delhi in 28 days. Called Janadesh (People's Verdict) 2007, it was the most recent in a series of efforts by the Ekta Parishad, a network of social organizations campaigning for the rights of the landless. Eight demonstrators died during the march, three of them in a road accident. The size of the contingent made the march a media event, drawing coverage from publications as well as television channels. It became difficult for the politicians to ignore it. 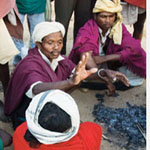 They are the Baiga people. They know only one way of living that is, inside the forest. The Baiga way of life has been recorded by many ethnobotanists and sociologists for its intricate knowledge of the forest. They also know a thing or two about terrorism. "That's what the forest department does; they call us encroachers on forestland, although we have tilled that land for decades. They routinely beat us with batons and shoes, graze animals and run tractors on our standing crops, molest our women and demand bribes at will," says Bhaddu. Then there is the punishment of going to the court periodically for hearings -- they are paraded as criminals and routinely mistreated.

They were accompanied on the march to Delhi by Hari Ram Mongre, who is from the Pannika (weaver) community. "The Baigas and we trade in the same weekly markets. They buy clothes from us and we buy their forest produce. But now, it is difficult to earn a livelihood out of weaving," he says. Mongre has 1 hectare of land, over which he has fought an 11-year-long court battle. "I managed to prove to that court that I'd been tilling that land for 30 years. And yet I don't have its possession."

Katku says 2006 was a particularly bad year for him, with several visitations by the forest officials. He says he is likely to pay a big price for coming to the march--he had a court hearing on October 8 in the Dindori district court. Budu says his entire family in Tikariya village was jailed in 2006 for three days; he had to borrow on interest to pay the bail of Rs 3,000.

Isn't there a great dearth of land? "It is a great lie that there is not enough land. It is just that there is no will to give to us what is ours. How is it that industries are coming up all over Chhattisgarh on cheap land?" asks Budu.

Phool Singh of the Gond tribe is also in the contingent, and is listed as an encroacher upon half a hectare of forestland. "The state government has repeatedly promised us justice, and then backtracked. Yesterday was the first time a union minister made us a promise." 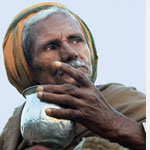 Gandhi Jayanti does not register in Shankar Sah's calendar. "We left Gwalior on the Tuesday before four Saturdays. We've walked a long distance to ask for some land. Most land in my village Misrautiya belongs to the Mishra Brahmins. The small land we had was eaten up by a pwd road. We did not get anything in return," he says. His caste identity is Teli, a community engaged in cold-pressing oilseed to extract oil. "It has been years since the kolhu (oil-press) worked," he says. 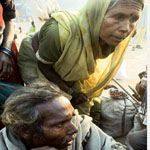 Shanti Bai says her association with the Ekta Parishad is a decade old. She led 25 marchers, mostly women, from villages around Ganj Basauda. She is a head-loader, which means she collects fuelwood, carts it on her head and sells it in the market. "We've been away from home for more than a month. It'll all be worth it if the minister delivers what he promised." With her is Karan Singh of the oppressed Sahariya tribe of Badhi Bir village. A migrant labourer, he is listed as an encroacher on less than half hectare of forestland. "The forest department has acres with not one tree and we are told there is no land." 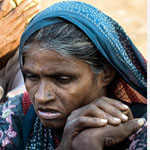 She does not even have a plot to erect a hutment. She collects headloads of fuelwood, sells grass and finds occasional employment in stone quarries. "How is it that the government has so much forestland to give away to mining companies and not a patch for us? We have to constantly shift from one hutment to another. There is always the threat of dogs getting inside and eating what little food we have," she says standing right in front of the Life Insurance Corporation of India building, with neon signs soliciting housing-loan seekers. 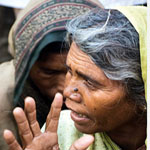 The Sahariyas often figure in stories of starvation deaths. The story of Kamla Bai of Baraudgya village shows why. "We don't have land for even a hut. Sometime ago, when I was away, strongmen of the Lodhi caste burnt down my hut. I lost everything I had. The police refused to register a case, calling me an encroacher on revenue land," she says. "I've built another hut, but now the forest department says it's on its land. Where do I go?"

Gorelal, also a Sahariya, of Bhela village got a patta (deed) for a small patch of land under the drive to give land to the landless. "But the powerful Maina caste won't let us take possession of it. Ramswarup Maina, who has possession of my land, threatened to cut me into small pieces. When I showed him the tenancy document, he asked me to go and plough the tehsil office." 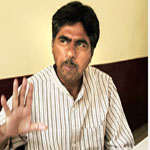 P V Rajgopal is the chairperson and inspiration behind the Ekta Parishad. He says Janadesh 2007 is the result of the upa government reneging on promises to bring in land reforms. "We had met all the top leaders from different parties, including the constituents of upa , before the May 2004 general elections. After upa came to power, land reforms was included in its agenda.There were numerous reports, even by the Planning Commission, detailing what was required of the government to address land reforms and rural distress. And yet there has been no action," he says. "In our past meetings with Prime Minister Manmohan Singh and Planning Commission Deputy Chairman Montek Singh Ahluwalia, we were asked primary questions on land reforms. They asked where was the land to give to the poor. How is it that they have land for industry--look at sez s--that does not provide employment to the rural poor?"

"We felt the need to impress the desperation of the landless on the consciousness of the ruling class. While the technocrats at the top of the government machinery have no clue about land reforms, seasoned politicians are also refusing to cast their lot with the rural poor, lip service notwithstanding. They don't see a political future for themselves in truly representing the interests of the rural poor, which forms a majority in the country. They forget that the longest-serving state government in India--the cpi(m) in West Bengal--has retained power on the strength of the land reforms under Operation Barga, which drove out Naxalism from West Bengal," he adds.

Rajgopal warns that if the government fails to heed to non-violent efforts like theirs, the militant approach will gain ground. "Look at the Naxal influence. What worries me is that the mandarins prefer the Naxals; violence and terror gives them an excuse to ignore popular discontent," he says.