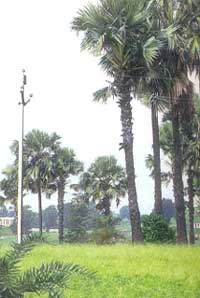 This is the visiting card of an Indian tribal who has witnessed the travails of living in an environmentally-ravaged land. His story is by no means isolated. It probably resembles the story of millions of other tribals.

Mangilal remembers when there were lots of trees in the forest near his village. Slowly, those trees disappeared - people hacked them down and sold them off in the nearby markets of Gujarat. Consequently, they became heavily dependent on trees growing on their private lands. "When I was growing up, we used to steal wood from trees belonging to others and others used to steal wood from our trees," Mangilal recounts.

Soon, his father, Sur Singh, realised the importance of trees. He instructed all his sons that it is vital to protect their private trees. Mangilal vividly remembers an event that took place 15 years ago. His father heard the sound of an axe. He rushed to his land to find another Bhil cutting down one of his anian trees, which is a vital source for winter fodder. Sur Singh strongly protested, but his opponent threatened to kill him. It is not unusual for Bhils to resort to violence. However, Mangilal's father retorted, "You will take the tree only over my dead body," and sat down on the felled tree. Soon, all of Sur Singh's family turned up and the trespasser fled.

Today, Mangilal's 4-hectare land has 4,000 trees instead of 300 in 1980. These trees are an important source of income for him. Often, he loans out his anian trees to others for lopping leaves for use as fodder. A small anian fetches Rs 250, while a large one can get Rs 300. In 1997, he earned Rs 7,000 from his trees. Even the rains were good and so. grass was easily available.

Mangilal is now the chairperson of the village watersh@ development committee and is thrilled to see trees coming ba on erstwhile forest lands. He is today a strong votary for trees During my trip from Jhabua to Sondwa, a distance of abc 50-60 km, I found that Mangilal was not the only person who h realised the importance of private trees in a land that has be ecologically-ravaged to an unbelievable extent. I first came acn; a lot of mahua trees growing in farmlands. I went and looki under the tree and saw that the crop under the tree doing well. So why was the peasant growing a tree at t] expense of the crop? We asked a tribal passing by. The ansA was simple. It brings a lot of money, mom than the crop that affected. Its seeds, locally called claufl, can be used as food oilseed. The remains, after the oil has been taken out, can be ug as rich cattle feed. Flowers can be used to make the famo tribal liquor. Mahua seeds sell for Fis 8-10 per kg in the lo( market and one tree's wealth can fetch as much as Rs 2,500 is 4,000 a year. So the farmer asks, 'How does it matter if I get oss grain from a few square metres of land?"

Along the road I saw farms that had toddy palm, farms that JPd mango trees and farms that had a variety of species growing amid the crops. In fact, scattered studies from across the country 09 showing that where people lose trees on their common lands and have no control over the management of the common lands, start giving importance to trees on their own lands. Infortunately. there is little realisation of this among environtalists, foresters, animal husbandry experts or rural development officials. Otherwise, this peopie-driven agroforestry would ve become an important action point for all these groups.

The sad fact is that very few experts and officials - the gite - are relating to the experience and knowledge of 108016 Mch as Mangilal. Poor people also have their solution. Th" say be powerless in terms of money. But they do not lack power.