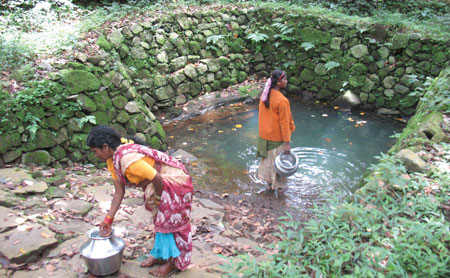 About two years ago, a fire broke out in the Biligiri Rangaswami Temple Wildlife Sanctuary in Karnataka. The police arrested 35 community leaders of Soliga tribe for causing the fire. Five people still have cases against them. Yet the forest community recently submitted a bold proposal to the Centre advocating benefits of their century-old practice of annual litter fire, or theregubinki, for managing the forest and thereby conserving the wildlife.

The proposal was sent to the Union ministry of environment and forests just weeks before the government declared the sanctuary a tiger reserve early this year. About 20,000 Soligas, whose lives for generations have been inextricably linked to the BR Hills, find their future insecure. Their traditional homesteads are in the core area of the sanctuary. But community leaders warn neither the forest nor tigers can be saved if they are driven out. The health of the forest has deteriorated with growing infestation of hemiparasites and weeds like lantana, since the government banned theregubinki in 1976, says Karnakede Gowda, a community elder. Animals are fleeing in absence of food. Herd sizes of most animals have shrunk despite curbs on poaching, he adds.

The petition pleads for a conservation plan that includes modern as well as traditional practices like theregubinki.

Soliga in Kannada means children of bamboo. The very name suggests their harmonious existence with nature and traditional knowledge to manage the forest ecology—be it collecting forest produces in a sustainable manner or setting fire to the forest floor once a year.

Theregubinki, Soliga elders describe, is not a random practice. It is an intricate process performed in harmony with factors like soil moisture, wind speed and stages of vegetation growth. “In our forests the rains continue till January,” says Acchuge Gowda, former president of Taluka Soliga Ahivruddhi Sangha (TSAS), under which the Soligas are united. “We start the fire in February when the tall and dense strands of the elephant grass dry out but the roots are still green, and there is a lot of moisture in the soil.” This grass fire never reaches a height of more than a metre. 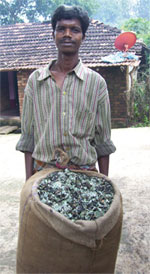 It stays at one place for not more than five minutes because hullumuriagaali—the grass breaking wind, also known as nagaragaali or the snake wind due to its speed—constantly chases it away, spreading it to other areas. The fire burns only the grass culm, litter and weeds like young lantanas. But the soil, rhizomes and even the ground-dwelling fauna do not get burned, says Acchuge.

Once the grass and leaf litter of the old year is burnt, the stage is set for bittenegaali—the seed spreading wind—that starts in March and goes on till the end of May, blowing mature seeds over distances of up to three kilometres. Since no weeds are left to hinder them, the seeds settle on the ground and germinate well, renewing the forest wealth.

The truth of these insights is corroborated by ecologists and forest officials. Ecologist Madhav Gadgil, who has studied the management of bamboo in the state through a similar fire practice, says Soligas’ wisdom is logical and studies are needed to understand how their practice has maintained biodiversity of the region. M H Swaminath, additional principal chief conservator of forests (wildlife) of Karnataka, says the vegetation in the BR Hills is hardy. The fires thus facilitate grass growth in the forest. “For the past 10 years we have been rigidly curbing litter fire in the forest, but now we need to have a relook.”

‘Only way to check weeds, pests’

The entire sanctuary now seems to be choked by lantana explosion. “The weed has edged out native grasses. We used to have 12 to 14 varieties in the forest. Both livestock and wild animals depended on them for food. Some were even used for medicinal purposes,” says Dasai Gowda, priest of Butani Podu village. Handibalehullu (wild boar grass), for instance, is one such grass consumed by women for easy delivery and postnatal recovery. It is also a favourite of elephants. The grass is now rare. With reduction in grass and proliferation of the woody weed that makes impenetrable thorny thickets, animals are not getting enough food and space. “If you follow any road in the hills in the morning,” says Kadanamade Gowda, president of TSAS, “you will find elephant dung all along. Unable to walk through lantana, they follow roads these days.”

Shortage of food is either forcing them to migrate out of the sanctuary or driving them to raid crop fields. In the past decade and a half, large numbers of Soligas have shifted from millets and legumes to coffee plantations. “There is too much of milled rice in our diet these days, and hardly any greens and tubers,” says Jeeramadamma, community elder of Kannere Colony. She blames this shift for the growing cases of anaemia, fatigue and constant body ache among people in his community.

R Siddhappa Shetty, a botanist who has researched forest management techniques of Soligas, says lantana explosion has also choked regeneration of trees in the sanctuary; the weed does not allow any other plant to grow under it. Most trees in the forest are now more than 30-40 years old. To compound the situation, a large number of trees like gooseberry are dying due to attack from hemiparasites like mistletoe. Says C Madegowda of ATREE, a Bengaluru non-profit, and himself a Soliga from Bangle Podu village: “In my childhood, there was no mistletoe attack as the smoke from annual forest fire kept it in check. Now, no amount of removal by hand or lopping of affected branches ends it.”

Other than gooseberry, the availability of wild mangoes and other local fruits, honey and lichens have also decreased with the change in forest composition. “As lantana exhausts groundwater, yields drop. Water holes are also drying up,” explains Acchuge. Leeches and ticks are increasing due to pilling up of damp leaf litter, he adds.

Though theregubinki is the possible solution, Shetty feels it might be difficult to revert to it given the present state of the forest. “Setting fire to lantana could cause canopy fires,” says Shetty. This is what triggered the forest fire in 2009.

Soliga elders agree. But starting small and carefully controlled fires in patches where lantana has been manually removed could be a way to return to the old practice. “We have demonstrated this to forest officials,” says Karnakede. “Last year while removing lantana under the Mahatma Gandhi National Rural Employment Guarantee Scheme, we fired a small patch in Honnearegadde forest. There are now 17 new seedlings in the patch, whereas only lantana has come up in the adjoining area.”

H Sudarshan, a doctor whose non-profit Vivekananda Girijana Kalyana Kendra has been working with the Soligas since 1981, says the petition by the Soligas also demands community right over forest. Once they receive the rights, some Soliga leaders plan to do theregubinki in experimental patches and demonstrate its benefits. May be then, Sudarshan says, the government will allow them to revert to their traditional practice.
Features Tribals Traditional Knowledge Traditional Knowledge Tiger Reserves Protected Area … Lantana Invasive Alien Species Groundwater Forests Forests Forest Personnel Forest Management Forest Fires Biligiri Rangaswamy …
SUPPORT US