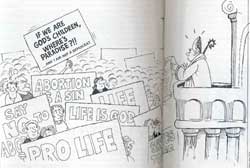 SUCCOUR came from Rome. For the "pro-lifers" in the US -- as the members of the anti-abortion camp style themselves -- the 11th encyclical of Pope John Paul II, a 189-page pronunciation of papal wrath against abortion and euthanasia -- came at a moment when the battle for the fate of the foetus could swing either way. "It's both an intellectual and emotional shot in the arm," enthused Helen Alvare, spokesperson for the National Conference of Catholic Bishops (NCCB).

Americans, many with clear conservative sympathies, are yet to get over the terrifying shoot-out (when) at Pensacola, Florida, when Paul Hill, a fanatical anti-abortionist, opened fire on medics working in a women's health clinic and killed 2. Recurring hate attacks by "abortion-foes" had not only alienated a giant chunk of middle class America sick of escalating social violence but also seriously embarrassed the Republican Party, which had swept the US Congressional polls late last year riding the crest of an anti-abortion wave.

But the Pope has now taken the sting out of the wound, declaring it the "inescapable responsibility" of the world's 950 million Catholics, many of whom support non-contraception but not necessarily abortion, "to be unconditionally pro-life".

After the Copenhagen Summit, which turned into a "pro-life" vs pro-abortion tussle, the issue is back hot on the forge. And the Republican leadership, representatives of the Grand Old Party (GOP) of the USA, is -- at least for the moment -- holding the hammer. The Republicans have long considered the issue one of the foundation bricks of its ideology; by, at least, those comprising the "right of Torquemada" grouping in its conservative wing.

The message was driven home after a tumultuous intra-party debate(when?) on the floor of the House of Representatives over the new welfare reform bill introduced by the Republicans themselves. As many as 15 GOP members voted against the legislation, griping about provisions barring cash aid to unmarried under-18 mothers, and also blocked increased aid to recipients who have additional children while on welfare.

"We are poised to enact a legislation that is likely to increase the number of abortions performed," grumbled Rep Christopher H Smith, co-chairperson of the House Pro-Life Caucus. The anti-abortion forces are convinced that the cutoffs introduced in the bill will act as powerful incentives to abortion. The bill managed to scrape through -- but only just, with a narrow 217-211 margin. And party bosses like Speaker Newt Gingrich were left wondering if they must now decide, once and for all, to what extent abortion considerations should colour their other policies and whether the party should even try to find a broad consensus on the issue.

The vote exposed the schism in the party. The doves liken the current stand on abortion to that of "monks in the 13th century", while the conservatives insist on protecting what they term as "the rights of the unborn child". "If we don't stay a pro-life party then the pro-family voters who provided crucial ground support last fall will bolt," was Smith's ominous prediction.

The pro-life plank has undoubtedly been one of the party's most valuable assets. It not only ensured that the traditional allies of the Republicans, the Catholic Church and the National Right to Life Committee continued to remain steadfastly loyal to them, but also helped them notch up some major tactical victories against profoundly righteous Democrats.

In fact, the controversy over human embryo research had marked the beginning of the new Republican Congressional regime. Last year the Clinton administration was all set to lift the 13-year-old ban on the federally funded human embryology study. This research, claim scientists, facilitates in vitro fertilisation and also holds the key to cancer, infertility and numerous other diseases. The process consists of fertilising a woman's egg in a test tube and then reimplanting it in the mother.

Successive governments had turned down the scientific community's pleas for federal grants, fearing a backlash from the electorate, a large section of which vociferously condemned "experimenting with human life". President Clinton got the National Institutes of Health (NIH) to appoint a panel of experts on reproduction and bioethics to explore the pros and cons of such research. The panel's recommendations were overwhelmingly supportive, and the cash-strapped scientific community looked forward to a flood of government grants.

But backed by anti-abortion groups like the American Life League and the Family Research Council, the Republicans raised indignant protests against this "barbaric" practice. Although this was, strictly speaking, not abortion, the "abortion-foes" said it involved the deliberate destruction of a potential human life. "We are creating the human life for the sole purpose of experimenting on it!" fumed Smith.

The Clinton administration's attempts to cajole and convince the dissenters petered out after the decisive victory of the Republicans in the Congress elections, which yielded as many as 39 seats to ardent anti-abortion campaigners. In December 1994 the government backtracked. It was an impressive 1st-round win for the Republican Congressmen.

But now the bouquets have turned to brickbats. The GOP is no longer savouring its role as the pro-life crusader, as the Republican's allies grow bitterly resentful of the welfare reform package. "If we stand silently by and not have the courage to speak out against these proposals, then we could never look anyone in the eye again and say we support alternatives to abortion," blazed Wanda Franz, President of the National Right to Life Committee.

The US Catholic Conference has also expressed its serious concerns over the issue. The leaders of the Roman Catholic bishops are convinced that the new regulations would only spur abortions and penalise poor children. "We must resist the temptation to see poor women, minority families or immigrants as either passive victims or easy scapegoats," read a scathing statement issued by the Conference's administrative board.


There is another group which is appalled at the new Republican-initiated healthcare reforms -- and not for the obvious moral reasons. It is the scientific community. "The welfare cutoffs will place the federal government in a truly indefensible position by denying funds for abortion, encouraging pregnant women on Medicaid (welfare grants) to have babies they could not afford to support, and then punishing them by denying benefits for the children," declares a report prepared by the Alan Guttmacher Institute, a non-profit research group. The research director of the institute, Jacqueline Darroch Forrest believes that the only way to reduce teenage pregnancy and abortion is to initiate more intensive research on contraception.

And in this field the US has lacked shockingly. "The atmosphere for research is abysmal. We have nothing in our hands available now, or coming down the pipeline that isn't based on basic research done in the 1960s," laments Anita Nelson, a gynecologist involved in human trials of new contraceptives at the Harbor-UCLA Medical Center. Contraceptive products that were once plentiful, such as intra-uterine devices have been withdrawn, and the interest of the Foundations that used to support contraceptive research appear to have dwindled.

The fallout of this apathy is reflected in the statistics provided by the research institutes. Despite the hue and cry raised by the pro-life forces, the abortion rate in the US, almost 30 per cent of all pregnancies, is much higher than in nearly all the other industrialised nations. Teenage pregnancy in the US also remains chillingly high. Twelve percent of all women between 15 to 17 years of age conceive every year and 57 per cent of all pregnancies in the country are unplanned.

Why is the government, beleaguered as it is by abortion-related controversies, failing to initiate a vigorous research into contraception? Nelson offers a very intriguing theory. "There is an ambivalence. I'm not sure we feel comfortable as a society having women controlling their fertility," she says. Is the Pope listening?