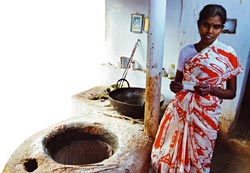 Nimati Domohini village in the west of Buxa Tiger Reserve, West Bengal, is on a highway where a side road breaks off and leads to the reserve's Nimati range office seven kilometres away. But the village is miles away from realising the dreams dreamt by its 331-member eco-development committee (EDC) set up in 2001. Each committee member was allocated Rs 10,000. But the village decided, on forest department advice, to purchase community-level assets.

The village invested in tractors, pig and chicken farms, a grain shed and a fishpond. Domohini's microplan was extensive. But when Down To Earth visited it in September 2003, everything had fallen apart. The village had split into two rival groups: a set of very defensive former EDC executive members who had brought the equipment and set up the facilities, and disgruntled new members who had a ramshackle office and no clue of asset whereabouts. One tractor lay broken and the other stood near the porch of a previous EDC executive member. The farms and sheds were now broken buildings, shelter for landless villagers. The fishpond had been grabbed. Arguments broke out over who had cheated the EDC, who had taken the tractors away and why farms had failed. Only one fact was beyond dispute: the project money had done village no good. The rich had got richer and the 181 poor, landless members had nothing. All villagers agreed that the project money, once an index of hope, had irreparably damaged them.


Why did Nimati Domohini go this way? This village and others like it suffered from critical defects in the project plan and implementation, which created a new delivery mechanism built around the existing structures of the forest department

The EDCs were to be set up after making villages aware about the eco-development project. NGOs were to create awareness and then frame microplans in which villages were on equal footing with the forest department. In Buxa Tiger Reserve, the first attempt at setting up EDCs failed because the NGOs the department hired were new to this kind of association. "To begin with, the NGOs made three kinds of microplans and replicated them all over. Obviously, they failed and many of these plans had to be redrawn," says K C Malhotra, who has observed Buxa closely. The department lost time: this shows up in the number of EDCs created in each of the five years of the project. The project picked up only in the third and the fourth year, by which time the project was about to close.

In most villages, the participatory methods needed to create microplans were merely rhetorical. Had IEDP inherited this problem? For, even under the Forestry Research Education and Extension Project (FREEP) in the Great Himalayan National Park, pontificating consultants had dictatorially decided what alternative livelihoods suited the people. Villagers living at 10,000 ft were asked to set up poultry farms; those living lower were to cultivate high-value medicinal plants which grow only at high altitudes, says a development consultant working in the region.

In hindsight, Kathy MacKinnon, senior biodiversity specialist of the World Bank at Washington, says that some project sites were incapable of using the huge funds released to them in such a short period. Rajesh Gopal, project head in the Union ministry of environment and forests, agrees.

The Nagpura resettlement colony became a model for 250 families. Some tribals prospered at the cost of others. They became agents, hard-selling department dreams. Today, at least more than half the relocated tribals (some estimates put it at 80 per cent) have sub-let their (project-given) two-acre field and work as daily wage labourers. "The land on this side of the forest is not fertile, and after some basic support for 10 months the families were left to fend for themselves," says Roy David of Coorg Organisation for Rural Development, an NGO that works with Nagarhole tribals. Families cannot sublet the land, as it is leased to them and ownership remains with the forest department. Officially, tribals have the land, but David says: "Most rehabilitated families have leased it to outsiders. Glossy pictures of the maize and cotton they have grown are shown as if it were the productive efforts of the tribal people." P M Muthanna, of Hunsur-based NGO Living Inspiration for Tribals, grudgingly admits, "Yes, about forty per cent rent out their lands. But many do till their fields themselves." Many relocated tribals wanted land on the Coorg end of the park. "It is more fertile and we usually work in the coffee plantations there. We wanted to go there but the department said the land is only available at this side. We finally relented," says Thimma, Jenu Kuruba leader in Gadde hadi, Nagarhole.

Yet another 200 families are now to be resettled in Hunsur division. Forest officials say land was selected in Coorg, too, but coffee planters encroached upon it. These 200 families are now 'voluntarily' waiting for two-acre plots the government says is theirs but which they can't call their own. "Planters don't want us to take that land because it is fertile, but they would have us stay near the forests so that we work their fields at low wages. The forest department plays along," says Thimma.

The trouble at Nagarhole came to light because of the high-pitched campaign. At some other sites, relocation is more tardy, not necessarily 'voluntary' or 'well managed' In fact nearly all the groups those working for tribal rights as well as conservationists -- in Nagarhole feel good that the controversy is dead. With the project over, both groups believe they can carry on doing what they want to. One wants the tribals left inside, quietly collecting honey and other forest produce to eke a living; the other wants to quietly shunt them out. What the tribals and the forests need are incidental.


As the facts of relocation remain muddled in state government files one never can reach, only a visit to each site and thorough research can throw up the truth. At Buxa, the state forest department has been able to shift only one village, Bhutia basti, in seven years. Many of the relocated villagers are happy, for in the forest their crops were often damaged. This relocation was tricky for villagers as well as the department. In politically charged rural West Bengal, Bhutia Basti was divided into groups supporting the Indian National Congress and Communist Party (Marxist). Each group wanted to settle villages that supported its political affiliation. It took the department several years to find 'politically correct' cultivable land!

At another level, there is no clear national policy on relocating tribals from PAs. While news trickles in of protests from one or the other PA, the ministry of environment and forests has never thought it wise to clear its stand on relocation. The fear of large-scale regional and national protests drives the ministry into its shell.

No wonder, then, that IEDP remains mired in Janus-faced ministry games, where solar lanterns and brass pots are first held up as livelihood alternatives to tribals, who are then cajoled and pushed to move out. The tribal communities, therefore, always remain wary of the department's overtures. This is evident in the case of the five Kani tribal settlements in Kalakad Mundanthurai Tiger Reserve as well. Here, the contrast between the tribal and non-tribal's participation in the project is stark. While non-tribal agriculturists at the periphery of the forest have taken to the project with great lan, the Kani settlements, always threatened with eviction, remain uninterested.