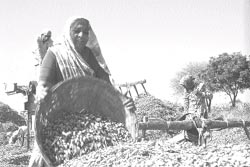 In the past six years, the 3,500-odd residents of this village in Rajkot district, which falls in the Saurashtra region of Gujarat, have come a long way. After a prolonged water crisis, the village is well on its way to solve the problem through recharging of wells. Shamjibhai Antala of the ngo Lok Manch, who has helped recharge around 700,000 wells in Saurashtra, says : "Recharging wells is the lifeline for farmers here." Of the 150 wells in Mandlikpur, farmers have recharged about 110, most of the work being done by individual farmers. Residents are also capturing rainwater through roof-top harvesting systems. Rasikbhai Patel of Mandlikpur says he can now store 10,000 litres of water every season. It is enough to meet the needs of his family of five throughout the year. This is the same village where there are four 300-metre-deep borewells, Antala reminds.

"I started recharging my well six years ago. Since then, it has not dried up, as it used to earlier. Today, it is possible for us to cultivate rabi crop," he points out. Patel's two wells are 24 metres and 16 metres deep respectively. "You can irrigate 4 ha of land after recharging one well," Antala says.

Before the village took to capturing rainwater, hundreds of families used to migrate every year to Surat, Ahmedabad and Mumbai in search of employment. But the rate of migration has come down. Even in the current drought-affected year, very few families have left the village. "Going by the experiences of my neighbours, I have also decided to harvest rainwater through my well. I am constructing a kundi (a covered tank) this year," says K V Khat of the nearby Pedla village.

There are varied techniques to recharge a well. Some have made slopes to direct the water to their farms. Some others, like Chimanbhai Radadia of Dhoraji, have laid pipelines for the purpose. Says he: "We have recharged our well by constructing a 106-metre-long pipe that is three metres deep. In the past five years, crop production has almost doubled."