Solar is Ladakh's way out of the diesel trap 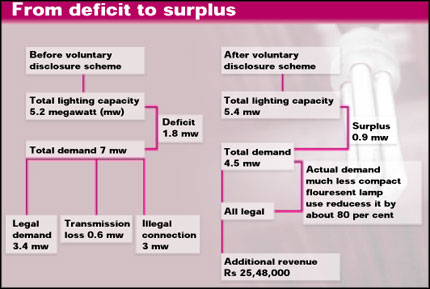 Life in a cold desert is harsh and exacting. You need enormous amounts of energy for everything, but there are very few sources. Getting electricity to light up houses in Leh is no easy task. About two-thirds of the power supply in the summer comes from diesel generator sets (DG) sets -- and this does not include the numerous power sets run by families, businesses and institutions. In 2002-03, the power development department of Leh burnt 2.57 million litres of diesel (at a daily average of more than 7,000 litres) costing over Rs 5.65 crore annually. And all this to supply power for about five hours in the evening. In the winters, the DG sets are the only source of power as the other source -- the hydel power plant on the Indus river at Stakna, about 40 km upstream of Leh city -- freezes up for about two months. The other problem with the hydel plant is that the heavy silt load of the Indus prevents its optimum operation. Desiltation is very costly.

Ladakh is not connected to the national electricity grid. Traditionally, people relied on cakes of cattle and yak dung to keep warm. But with tourism opening in 1971, came new demands. Now, tourists living in hotels expect hot tap water and a steady supply of electricity. Ladakh is providing answers to this situation in charactersitic fashion. Leh city has done a remarkable job of reducing its energy demand by introducing compact fluorescent lamps (CFL) that consume one-fifth the power that conventional light bulbs need by reducing the number of illegal connections and trying to tap the vast potential of solar power.


Electricity shortage and numerous illegal connections. These problems plague every Indian city. The answer, many pundits will tell you, is to privatise power supply as public sector companies cannot take tough, unpopular decisions. In Ladakh, however, the public sector power supplier has not only managed to regularise a majority of power connections and improve its revenue recovery but actually got people to spend several times extra to install energy efficient lighting systems. Take the case of the LAHDC's decision to replace conventional lamps with CFLs -- first in commercial establishments and government offices. While CFL saves energy, it costs a lot to install.

What LAHDC was asking the people to do was to spend more money on new components and expensive bulbs. "The key to our success lay in controlling the price of CFL and to demonstrate to the people that if they saved energy, the supply of power would improve and their power bills would come down," says Tsewang Paljor, assistant executive engineer with the power department. The price was controlled by selling subsidised 14-watt bulbs at Rs 180 each through cooperative societies and getting the private sector suppliers to lower the price. The price of the 18-watt bulb came down to Rs 250 from Rs 280. By September 2003, 37,000 CFLs had been sold in Leh, saving as much as 30 per cent of the total power consumed in Leh for lighting. The power tariff structure of consumers with 250 watts of consumtion or more was made such that if they did not switch to CFL, they would have had to pay higher rates. A social consensus was created on the need to save electricity. Today, several homes and establishments, especially hotels, have one CFL and one conventional lamp in the rooms. In summer, when the power supply is better, they use conventional lamps. In winter they switch to CFLs.

LAHDC was equally attentive to the need to deal with illegal connections. It began by organising meetings with Ladakh's political and religious leaders. The voluntary disclosure scheme used by the income tax department was used as a method to get people to disclose their illegal connections and get them regularised. Since November 2001, more than 4,350 illegal connections have been regularised. The increase in revenue in three years has been impressive (see flow chart: From deficit to surplus). Today, although power production remains the same in Leh, power supply has improved. The combined effect of energy conservation and regularising illegal connections is that the actual consumption drops to below the installed load at times.

But the villages in Leh district remain outside this innovative loop. A different and a more decentralised strategy is needed for them.


Leh district is planning to replace DG sets with solar and hydel power. Ladakh has an average of 325 sunny days in the year. The intensity and duration of solar radiation in Ladakh is the highest in the world. The daily average solar energy availability per square metre in Leh district is 6-12 kilowatt-hours. The district receives solar energy of over 400 billion kilowatt-hours per day. The actual daily potential is estimated at about 10 per cent of this, 40 billion kilowatt-hours, which is far more than the energy required in Leh district. In July 2001, the LAHDC and the Ladakh Renewable Energy Development Agency (LREDA) presented a proposal worth Rs 340 crore for solar installations in all houses and institutions of Ladakh. The project proposed 24,000 home solar systems, 12,000 solar lanterns and over 2 megawatt of solar power plants. When completed, the programme would put Ladakh at the top in terms of installed solar power systems per capita in the world.

The first stage of this project was completed in the summer of 2002 in a record time of four months. 10,000 solar home lighting systems and 6,000 solar lanterns were installed or distributed in 39 villages of Leh and 45 villages and hamlets of Kargil. These villages were not electrified and so remote that the chances of being connected to the power supply line in the near future are remote. The first phase was worth Rs 20 crore, 90 per cent of which was given by the Union ministry of renewable energy. The manufacturer of the photovoltaic cells will maintain the cells for five years. The beneficiaries have to pay an initial cost of Rs 1,000 and, subsequently, Rs 60 per month as instalment. But this money does not go out of the village. It is paid into a revolving fund operated by the village sarpanch. This fund would be used to replace components. Now, LREDA is preparing project proposals for the second and third stages. This would take about four months to complete. While the second stage aims to further the accomplishments of the first stage, the third stage will replace the diesel generator sets with solar power plants.

The other focus area for energy in Ladakh is micro and mini hydel projects. LREDA has drawn up a list of 31 sites for making mini hydel projects with a capacity of about 50 megawatt. The National Hydro-electric Power Corporation is building a mini dam (45 megawatt) at Alchi on the Indus river. This dam will also function in the winter, for it will be equipped with a better and more efficient system to deal with silt. Moreover, the prime minister has promised that Leh district is going to be hooked up with the national grid. LAHDC is very excited about this prospect. When the grid begins to hum with electricity, Ladakh plans to supply electricity to 'down' in summer, when there is a great power shortage there. And in winter, when the plains have excess power, it can be supplied to Ladakh.