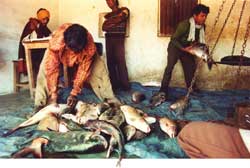 PEOPLE are the best managers of biodiversity. This statement succinctly summed up a conference organised recently at the Indian Institute of Forest Management (IIFM) in Bhopal. It is also the tenor on which the Madhya Pradesh government's decision is premised, allowing villagers around the Tawa reservoir to retain their fishing rights. Not only will this let them carry on fishing activity at the reservoir, it will enable the fisherfolk to continue marketing their catch as well.

The success story scripted in Hoshangabad, where the reservoir is located, is going to have a wider impact. Impressed by the Tawa model, the Digvijay Singh dispensation is set to hand over control of all major reservoirs in the state to fishing cooperatives, albeit with some riders.

The official announcement that the lease of the Tawa Matsya Sangh (Tawa Fisheries Cooperative) will be renewed shortly comes after several months of ambivalence by the authorities. This despite the cooperative proving to be an unqualified economic and social success (see table: Tipping the scales).
Fisherfolk at Tawa had been on tenterhooks because of the Bargi precedent (there, a villagers' fishing cooperative had to cede fishing rights to a government-controlled body), fearing that history would repeat itself. Ominously, in Tawa too the Madhya Pradesh State Fishing Federation (SFF) was trying its best to wrest the lease it had lost five years ago to the cooperative.

Today, Fagram, the adhyaksh (head) of the Tawa cooperative, breathes a sigh of relief but points out, "We are aware of the shenanigans of a section of the bureaucracy and the federation. Both fear that if the Tawa example is replicated elsewhere in the state, they could end up without work."

His joy on the renewal of the lease is tempered with scepticism about the newly imposed conditions. The cooperative can now appoint managing directors only in accordance with government guidelines. Members of the Sangh feel that this will lead to political and bureaucratic interference. The fisherfolk will also have to pay royalty on their entire catch as against the earlier 80 per cent.

In fact, the grouse that the cooperative holds against the concerned departments is that they have never imparted any technical advice. It was at their own initiative that the villagers went to the Central Institute of Fisheries Education (CIFE), Hoshangabad, to get trained in fish rearing. And ever since, the fisherfolk's body has experimented with novel methods of fish seeding instead of depending solely upon government-owned hatcheries.

N K Srivastava, senior scientist at CIFE, calls this a commendable achievement. "We have not conducted a thorough study, but one can say that the entire system is ecologically sound and extraction rates and sizes seem optimum." Fagram, however, rues the lack of scientific inputs. The SFF has neither conducted an analysis of the fishing activity at the reservoir, nor does it plan to. "We have worked without any assistance (see: 'Fishing in troubled waters', Down To Earth, Vol 9, No 18, February 15, 2001). The least the federation, which earns royalty from us, could do is assist us by conducting research. For instance, the SFF can try to ascertain why the head size of the catla (Catla catla) is larger in the Tawa reservoir, rendering the fish catch relatively inferior," he says and adds, "they have still not given us the cold storage facility promised long back." Fagram's disenchantment is not unfounded.

A retired managing director of the SFF (formerly called the Madhya Pradesh State Fishing Corporation) says, "These people were never fisherfolk to begin with. Once displaced, they learnt to fish and soon became experts. The production of fish rose and people got nearly three times the rate that they were receiving under the earlier contractor-corporation system. Even the government gets a much higher royalty from fishing now. Obviously certain sections, which enjoyed complete monopoly in this business worth crores of rupees, feel threatened."

Sunil Gupta, advisor to the cooperative, explains further: "Under the earlier arrangement, the corporation used to auction fishing rights to contractors who then blatantly misused their powers, paying a measly Rs 3-5 per kilogramme (kg) of fish and perpetrating a reign of violence. When the cooperative was formed in 1995, it broke this trend. As much as Rs 15 per kg of fish was paid to the fisherfolk. Now the SFF is forced to maintain the same rates at places where they manage the show."


While it may not be possible to nail the contractors for want of proof, bureaucratic hurdles placed in the way of the renewal are very much in evidence. A high-powered committee set up to assess the fishing activity at Tawa comprised the minister for fisheries, the principal secretary for fisheries, the director of the fisheries department and the managing director of SFF. It had no distinguished scientist, economist or civil society representative.

Three of the panel members refused to divulge the contents of the report on Tawa submitted to the state cabinet. But those who have studied the cooperative's work reveal that the committee failed to take into account any scientific evidence to assess the condition of the fish in the reservoir and comprehend the linkages between the rising fish extraction and fish generation rates or auto-stocking rates. The socio-economic analysis it presented is not only said to be weak but also biased. Experts claim - on the basis of an extract from the report - that it provides selective and partial information, recommending that the lease be handed over to SFF, a la Bargi.


The villagers living around the Bargi reservoir on Narmada river in Jabalpur are not as fortunate as their counterparts in Tawa. Displaced by the construction of the dam, the only source of income for most of them was the right to fish which they got under the villagers' cooperative called the Bargi Bandh Visthapit Matsya Utpadan Evam Vipanan Sahikari Samiti, in 1994-95. But in 2000-2001, when the lease was to be renewed for the second time, a dispute arose. The case was finally settled in the Bhopal High Court, which handed over the management of fisheries to the state federation for one year and brought the primary fishing societies under it. The court ordered the setting up of a committee to conduct a quarterly overview of the functioning of the local bodies and stipulated that their grievances be redressed regularly.

The state federation continues to run the show, often riding roughshod over the people's rights. In Garaghat, one of the villages with a primary fishing society, fear is writ large on the faces of the residents. The reason: a stick-wielding posse in the employ of the contractor, who now markets the fish for the federation. Munna Lal Burman, chairperson of the society, says: "Two of our people were thrashed by the general manager of the federation and his men. We have even filed an FIR against him. Under the federation, it is the contractor raj revisited - hooliganism and brutality are their trademarks."

Kailash Tiwari, general manager of the federation who is posted at Jabalpur, defends his action: "In the course of my duty, what is wrong if I hit someone once in a while? We are unable to check pilferage on our own, so we also allow the contractor's aides to patrol the area and nab the culprits. These illiterate tribals do not appreciate how hard we work for their benefit. All they do is gripe constantly." He is supposed to help run the societies but says, "If I had my way, I would shut down these corrupt local bodies."

Not surprisingly, the list of complaints against the federation is long. Hari Burman of Sarangpur says, "It doesn't give us interest-free loans. Payments are made once in 15 days instead of a week. We have also not received any bonus." Manohar Lal of Beejasen is another complainant. "They confiscate our nets and boats and take bribes to release them. When the market is on a downswing, they cannot handle high fish loads. The result is that the federation arbitrarily orders closure of fishing, which is our sole source of income. If we try to sell fish elsewhere, the contractor's goons are ready to beat us up. The shutting down of the cooperative has spelt our doom," he says woefully.

Tiwari summarily dismisses these charges. "It is all about profits. The federation also has to pay salaries to its staff and maintain its offices. These people simply do not understand business," is his nonchalant retort. Significantly, the federation has been able to produce only 160.75 metric tonnes of fish in eight months starting April 2001 as compared to the 240 tonnes the cooperative had caught in 1999-2000 and 460 tonnes in 1998-99.


Word is spreading. The unique experiment pioneered at Bargi and then replicated at Tawa is now being cited as the panacea for the problems faced by Totladoh village in Nagpur, Maharashtra (see box: Where fishing is a sin). The Fifth Sanctuary Conference, organised by Shashwat, a Pune-based non-governmental organisation (NGO), brought into sharp focus the positive effects of devolution.

The national workshop organised by the Pune-based NGO Kalpavriksh at IIFM on 'Community Conserved Biodiverse Areas' also reinforced the reality that people evolve context- specific and novel methods to sustain their resources.

The plummeting production under the government-controlled federation in Bargi and the flourishing fishing trade at Tawa - where local fisherfolk are at the helm - show how communities manage resources best when left alone.

The villagers of Tawa appear to have wised up to the administration's tactics after the Bargi washout. In fact, Tawa has benefited from Bargi at every stage. From conception to resuscitation. Now, the latest move of the state government in favour of fishing cooperatives bodes well for Bargi and even Totladoh.

Proximity, in this case, has had a symbiotic spin-off.