No return of the native

No return of the native 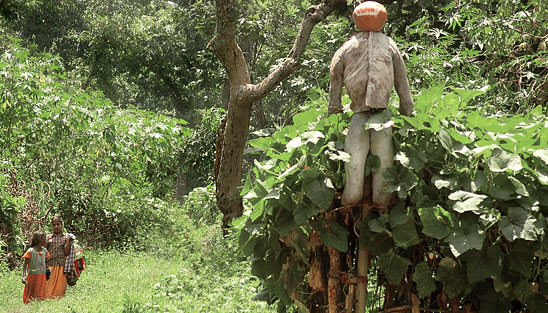 Wizened old Jidemadamma has to depend on her neighbours for meals. Her son and daughter-in-law have gone to Kodagu to collect pepper from trees and will not be back before two weeks. "They took the children along because I cannot move around much. Earlier, all of us stayed together here. Now there is nobody," says the septuagenarian, sitting outside her hut in Kaneri Colony, one of the 62 hamlets in Biligiri Rangaswamy Temple (brt) Wildlife Sanctuary in southern Karnataka.

Jidemadamma is among the few Soligas, an indigenous community, left in the hamlet. Soligas, literally meaning the "bamboo children", are known for their environment-friendly practices and sustainable collection of minor forest produce. But most have migrated in search of livelihood since the government banned collection of non-timber forest produce--honey, lichen, amla, soapberry and soapnut--their main source of income, about two years ago.Same is the story in other hamlets inside the sanctuary in the Western Ghats.

Migration is happening at a time the Soligas should be returning home, for good. The Scheduled Tribes and other Traditional Forest Dwellers (Recognition of Forest Rights) Act, 2006, recognizing tribals' rights over forests, was notified on January 1, 2007. "We thought once the act is in place our troubles will cease and people will come back, but there has been no change," says C Madhegowda, who works with the Ashoka Trust for Research in Ecology and Environment (atree) and is the first post-graduate among Soligas.

The ban on commercial use of non-timber forest produce was introduced in 2004 under the Wild Life (Protection) Amendment Act, 2002, but the Soligas continued collecting minor forest produce under Large Adivasi Multi-Purpose Societies until April 2006 because there was confusion whether the activity fell within the definition of "commercial" (see 'Stop trade', Down To Earth, September 30, 2004).

The produce collected by tribals was sold through multi-purpose societies in brt, Chamarajanagar and Hanur to the highest bidder. There are some 16,000 people in the sanctuary's core area who depended on selling forest produce and subsistence agriculture. They are migrating on a large scale.

In Puranipur hamlet, 80 of 110 families have migrated. Most of them either work in coffee and pepper plantations or as contract labourers in farms and at construction sites in Kodagu, Wayanad in Kerala and as far as 150 km away in Tirupur and

Coimbatore in Tamil Nadu. "In Kuntguri village on the foothills, tribals have permanently shifted to contract labour in the farms," says Sidappa Shetty of atree who has been working in the area for 12 years.

"Twice a week both my sons pluck weeds on the roadside for the forest department. Other days, they go to Chamarajanagar to work as coolies or construction labourers. Half the wages go in travelling expense. It is only because we have a coffee plantation, which buttresses our earning by Rs 4,000 a year, that we are able to survive," says Bummana Madhegowda of Muthugade Gadde.

"Sale of forest produce used to constitute about 60 per cent of our income and a person could earn up to Rs 12,000 a year from it. Agriculture here is only for subsistence," adds C Madhegowda of atree.

The Soligas have for years monitored forest resources to determine what, how and when to harvest. They are not interested in it anymore. The adivasi societies and the Vivekananda Girijana Kalyan Kendra (vgkk), an ngo that has been working with the Soligas for 30 years, had evolved a system of participatory resource mapping. "The purpose of the participatory system is to keep track of resources over time and space, and to monitor not only available stocks, but also regenerative capacity of trees and potential threats to resources," says Shetty in his study of the region. So during extraction of amla the tribals would remove hemiparasites, plants that partly obtain nourishment from their hosts, from trees. But since it did not happen this year, there were a lot of dead trees.

The tribals have also stopped helping the forest department in checking forest fires and in March 2007 there was a big fire in the sanctuary that took the department about 10 days to douse. The fire was blamed on tribals who wanted to revoke the ban on commercial extraction of forest produce. A case was registered against 28 tribals, says C Madhegowda. According to H Sudarshan, honorary secretary of vgkk, the fire was partly due to lack of vigilance by tribals. "The tribals played an important role in controlling big fires. The forest department employs 20-25 of them as fire watchers every year. This year the Soligas did not bother to check fires. Besides, very few people were employed for fire-prevention," he says.

Lack of tribals' cooperation is also telling on trees and wildlife. Unchecked lantana has inhibited the growth of kidiya trees, on which elephants feed, and there have been instances of elephants rampaging and destroying whatever small crops people have. "My husband Ramegowda has gone to Kodagu for coffee harvest. Here, too, we grow coffee, ragi and bananas. But three days ago, an elephant trampled the crops. Had it not been for our neighbours who alerted us that night, it would have destroyed our hut," says Nanjamma of Kaneri Colony.

vgkk's honey and pickle processing units in the region are not getting enough honey and amla. "There have also been instances of villagers selling honey to tourists illegally and we will not be able to control them for long if the ban continues," warns C Madhegowda.

On January 24, about 700 tribals held a protest meeting in Bangalore. "The governor assured us that a committee would be formed with forest officers and tribal leaders to set conditions for implementation of the forest rights act, but gave no date," says C Madhegowda. The forest department says it will take some time to implement the act. "After notification, it takes time to constitute various committees and decide upon the modalities," says R Raju, deputy conservator of forests, Wildlife Division, Chamarajanagar.

Till then, Jidemadamma will have to stay alone.