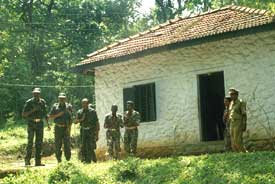 A forest guard sets out on his nightly patrol in the Periyar Tiger Reserve (ptr) in Kerala's Idukki district with the most unlikely companion: a former smuggler of vayana, the bark of the cinnamon tree. The two appear to get along well especially that now both are on the same side of the law. After a while, the ex-poacher suddenly stops and motions to his senior colleague. They can hear the almost inaudible thud of an axe. Approaching the direction the sound came from, they see a man walking away quickly, with a large piece of sandalwood. A walkie-talkie relays the message to a ranger. The patrol team is beefed up and the forest thief accosted and overpowered.

Fully aware of the modus operandi of poachers and knowing the reserve like the back of their hands, ex-poachers are valuable assets. Every evening, one of them goes to the local bus stop in Kumily, the town closest to the reserve, and surveys the crowds for suspects known from their earlier days. The old network now works for the forest department (fd).

How did this come about? In 1997, fd personnel caught a few people collecting vayana bark illicitly from ptr. fd offered to drop cases against them and instead asked them to lend their services in protecting the reserve. They were told they would also be trained in different ecotourism-related activities.

The bark collectors were in a tight spot and accepted the offer. "We were running away from here and some of us had escaped to Tamil Nadu. We could not come back as there were at least 15 cases pending against each of us. It was then we decided to give up our activities,'' says M M Naushad, who is the chairperson of the ex- vayana ecodevelopment committee (edc) formed in 1998.

The ex- vayana edc was set up with an initial project fund of Rs 3.5 lakh under the India Ecodevelopment Project (iedp). The edc has 21 members who not only patrol the forest but are also involved with several ecotourism projects. The earnings from ecotourism activities are pooled into a community development fund (cdf) from which each edc member gets a monthly salary of Rs 4,000.

Like the ex- vayana edc, several other edcs were formed with local groups/communities/villages under the World Bank-funded iedp. The project targeted conservation by providing people living inside, and on the periphery of wildlife parks with sustainable livelihoods. The project began at ptr in 1998 and ended in 2002, but was extended for two more years. Subsequently, the Kerala government set up the Periyar Foundation to be run as a trust to carry forward the work begun under iedp.


The formation of edcs saw a sharp drop in poaching as the economic state of the local people improved with earnings from ecotourism programmes. Besides, the edc members, also involved in the protection of ptr resources, have a detailed knowledge of the forest (see graph: Turnaround).

"There were two cases of ivory poaching that we stopped.