Opening to the past

Opening to the past 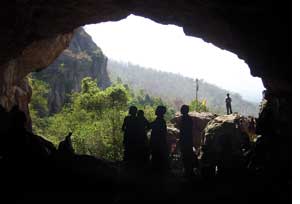 "When I visit the cave, I feel a sense of history with an intensity that cannot be described. My parents and grandparents never saw this. I feel for them, for my community, as much as for myself." Forty five-year-old K S Loya, a resident of Bastar in Chhattisgarh, speaks with a passion that a detached outsider might find difficult to understand. But for the Gond community of central India, the three-day Maagh Purnima jatra (fair, pilgrimage) of Kachhargadh is a rare opportunity to reconnect with community history.

This annual fair in the richly forested Salekasa tehsil of Gondia district in Maharashtra attracts around 500,000 Gond pilgrims from Madhya Pradesh, Chhattisgarh, Vidarbha in Maharashtra, Uttar Pradesh, Orissa and Andhra Pradesh.The fair, held to celebrate the liberation of the children of Mata Kali Kankali, regarded as the mother of the Gond tribe, from the Kachhargadh cave, was just one of the thousands of obscure tribal jatras held all over central India till around 1976, when a group of activists from the tribal students movement in Maharashtra found out about it. "We read about this fair in the books of English historians like C U Wills," said Motiravan Kangali, a researcher who has written 40-odd books on Gond religion, culture and language, and is the leader of the Gondi Punem Mahasangha, the apex cultural and religious body of the tribe.

Kangali visited the site out of curiosity and found the Kachhargadh cave. "All Gonds had heard of the Kachhargadh legend, but very few knew where Kachhargadh was or if it existed at all. Those days the newly-formed Gondwana Ganatantra Party was trying to unite the Gond community. We felt the fair would be a powerful symbol for the purpose and started propagating its significance." That was 1985. At present, the Kachhargadh fair is the largest tribal fair in India.

The central event connected with this fair is the climb to the Kachhargadh cave in the steep, thickly forested hills close to Dhanegaon, a small tribal village. Slogans of Jai Bada Deo and Jai Gondwana rent the air as groups swarm over the jagged hillsides on the way to the cave. At the end of a three-km trek from Dhanegaon is a huge cavernous opening on a hillside, smelling of the presence of wild animals, and littered with their dung. "Except for three days of the pilgrimage, this cave is the abode of big cats and wolves," Kangali said. "This is the beauty of tribal culture. We do not believe in taking anything away from its rightful owners."

Crowds of pilgrims jostle their way in the dark of the cave, over sharp undulations of rock, to reach a small pool of cool water located below a large, dazzlingly sunlit hole hidden behind a ledge of rock. The pilgrimage is over.

Then begins a descent more torturous than the climb because of the jagged outcroppings of sharp rock and loose stones. The pilgrims stop at thana (shrine) of the primordial mother Kali Kankali before going back down to Dhanegaon. At the shrine, Kangali pointed to a havan kund constructed in the courtyard to make offerings of coconuts and burn incense, "This was not there last year," he remarked. Inside the shrine, a large terracotta horse stands on the altar. "Two years ago there was an elephant here," Kangali said and added, "One never finds out how and under whose influence these symbols keep changing."

He later explained that the Gondi religious ritual has been heavily influenced by Hinduism over centuries. "Rituals are minimal in our religion.

Offerings are made to Badadeo only three times a year, and they consist of the produce of the season-- mahua oil in summer, wild vegetables in monsoon and paddy in winter. Coconuts, incense, oil lamps, all are imports from Hinduism. It is not easy to fight such strong influence."

Once the pilgrims are back safe, the completion of the pilgrimage is celebrated with more music. It is not unusual for bystanders to fall into a trance and run amok, albeit, harmlessly.

What draws the throng to the pilgrimage? For the rural masses, the fair's significance is largely religious. Chhanni Devi, an agricultural labourer from Balaghat in Madhya Pradesh, said, "We come because it is teerath (pilgrimage)." But for the educated younger generation, questions of identity are involved. A group of rural youth in their early 20s, burst out in loud Gondwana slogans when asked what the fair means to them. One boy shouted , "We are proud to be Gond. We are not Hindu."

Rahul Tekam, young editor of the Bhopal-based weekly Gondwana Kiran who has been visiting the fair for eight years now, explained "Rural tribal culture has not been documented. Many of us try to identify with dominant cultures for self-protection. This fair is one place where we can all be Gond and be proud of it. Here we learn to respect our traditions, legends and literature."

So has the fair, in the 20-odd years of its existence, helped define Gond cultural and political identity? "A lot, actually," said Anand Madawi, head of the Gond Sangha Mandi, a body of the community, "We now talk about the significance of our matrusattak (matriarchal) culture, our close-to-nature lifestyle, our perceptive social organization and our rich philosophy. And even the least aware are willing to listen."

"When we revived the fair," said Raje Vasudev Shah Tekam, a Gond chieftain and Maharashtra state chief of the Gondwana Ganatantra Party, "We had meant it to be purely a means for rediscovering our religious and cultural identity, but it is difficult to keep out political overtones. We Gonds want our own state, our own language, our own punem (religion)."

The revival has been an uphill path, however, for there is hardly any documentation to fall back on. "The Gondi language and script is nearly forgotten. Most Gonds use the language of the state they live in," Kangali said. He was forced to write a book on Gondi grammar for the simple reason that none existed. L R Maravi, a community leader, elaborated "Many Gonds had changed their Gond last names for upper caste Hindu names--Maravi to Malvia, Kudsam to Kulkarni under cultural pressure. In recent years, some have reverted to their old names. But the roots of Hindu assimilation run very deep, and lately, influences of westernization and commercialization are also affecting the world view of the young generation. In this hotch-potch, it is not easy to chart a cultural identity."

The hotch-potch is manifested in the make-shift market. Stalls selling paraphernalia of Hindu ritual worship do brisk business alongside smaller stalls selling herbs and roots traditionally used by forest-dwelling Gonds as medicine, and for rituals and magic. Young people sport Gond insignia and slogans on virtually everything--from pens to caps to scarves to key-rings to T-shirts. Books on Gondi script, spoken language and mythology are in great demand, as are pictures of Gondi deities--they are influenced by Hindu iconography. A calendar which provides information on Gondi religious festivals, and political and social events, depicts Badadeo as a Shiva-like figure seated on a bullock, carrying a trident.

In the evening, there are speeches. Political demands of the Gond community are raised--implementation of the forest rights Act, inclusion of Gondi language in the Constitution's eighth schedule, rights of the tribal community to education in the mother-tongue.

As the night falls, men, women and children spread out their meagre beddings and lie down just where they are sitting--under trees, in courtyards, on the tar road.