"We didn't know about the gram sabha meeting. We were intimated six hours before the meeting started and have no idea how the forest rights committee (frc) was formed," Bet Sai, a Pandu tribal from Mrigadand village in Sarguja district, told Down To Earth (dte). Forming frcs is the first step to initiate proceedings for villagers to claim their rights under the Scheduled Tribes and Other Traditional Forest Dwellers (Recognition of Forest Rights) Act, 2006, or fra.

Many tribals, like Sai, are clueless about the proceedings in a state that claimed it would start giving out patta to villagers by May 1 (see box Just plans). Far from it, Chhattisgarh is grappling with teething problems. It is not following its own action plan.Other grey areas include faulty constitution of frcs, certifying tribal status, distribution of forms, training of officials, land surveys and community claims. Officials, however, say things are under control.

Since villagers are not informed of gram sabha meetings in advance, the quorum of two-thirds of all members of a gram sabha is not met. But for this, says Sai, the administration has ready solutions. "The quorum has not been followed in any of the villages. frcs in most places comprise sarpanch's favourites who are not even present in meetings. In a few places, a double count of hands is done to complete the quorum," he added. Agrees Arun Kumar, an Ekta Parishad activist "The village headman does it to keep all the powers in his hand."

The fra is flexible when it comes to the application tool--forms. It provides for two separate forms, one for individual claims and the second for communities. Chhattisgarh has provided for two separate forms, just for individual claims--yellow forms for tribal forest dwellers and pink for other traditional forest dwellers. Each form has a serial number--purportedly to avoid fake forms. But the move has created a lot of confusion throughout the state.

First, there aren't enough forms. After two months of guidelines being issued, three villages in Borla block had only 10 forms each. Far-flung areas, such as the Daldali bauxite mines in Kawardha have been ignored. "We have not yet received the coloured forms, nor has any official come to us to explain how the forms will be filled," said Narayan Yadav, president of Mukam village's frc. The village is near the Daldali mines.

Also, under the act, three copies of a form are to be given to villagers one for themselves, one for the frc and the third for the sub divisional level committee. But those who have the forms, have been given just one copy.

Villagers also told dte that forms were being sold in some villages with the price ranging between Rs 50 and Rs 500. When the district magistrate learned of an incident in Salhi village in Sarguja where forms were being sold for Rs 50 at a general store, he got the store sealed and a few block-level officers were suspended. 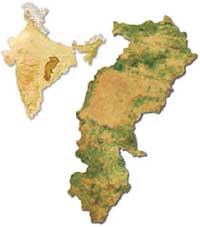 "The state is supposed to issue forms and the numbers on the forms were meant to prevent people from making money by printing and distributing it. But that is not happening. Forms are being sold at very high rates," says forest rights activist Madhu Sarin.

Since the fra says that applications can be sent in any manner, voluntary groups and ngos have started distributing forms themselves. But frcs in many places would not accept them because these did not have a serial number. In blocks such as Mainpur in Raipur district, officials unknowingly distributed photocopied forms to villagers.

The trend, however, is changing in "very few places". "We have pressured block level officers and the sub divisional officers to accept forms on plain paper," says Rajat Choudhury of the ngo, Church's Auxilliary for Social Action.

The other major issue is that the state has not issued forms for community claims. Basic issues such as the nature of applicants are unclear. M K Rout, secretary tribal affairs, Chhattisgarh, said that only those residing on forestland would get deeds and those residing on revenue land and dependent on the forest for livelihood would be excluded. But in the meeting in Premnagar, the sub divisional magistrate said that deeds would be given to both.

But this definition is leading to many interpretations, most erring on the strict side. Forest officials told dte that as most tribals lived off agriculture and not forest produce they did not qualify under these provisions. It is difficult to qualify what 'dependence' on forests actually means. Several states, which have begun implementing the Act, have written to the Centre on clarification on this count but it still remains a point of contention.

Sharda Verma, deputy commissioner, ministry of tribal affairs, Chhattisgarh, told dte that the forms were supplied in ample numbers and that she was not aware of applications on plain paper. On the May 1 deadline, she says, "We did not anticipate the time survey of land would take. We are hopeful of distributing the deeds before monsoon."

Even when monsoons were round the corner, about 400 villages in southern Chhattisgarh had made little progress in claiming rights. "Villagers in these districts had no idea about the Act and those who had, didn't know what to do," says Himanshu Kumar of the Vanvasi Chetna Ashram at Kawalnar village in Dantewada. Kumar adds that the collector was not sure of what was to be done in Abujmar, a Naxal-infested area with no land records or maps.

On survey in other areas, officials at the ministry of tribal affairs say land will be distributed after the frcs complete the survey, but the forest department claims distribution will depend on its survey conducted last year. "We had surveyed the number of beneficiaries and the land to be distributed. This was done to ensure that there is no delay in the process of verification by the frc," said Sharma. But what are the numbers? There seems to be no one estimate. The tribal and forest departments quote different numbers. Verma says 1.8 million yellow forms and 0.6 million pink forms were printed to be distributed in 18 districts of the state, of which they received 0.25 million claims and were expecting more in the near future.

Diwakar Mishra, chief conservator of forests (land management), Chhattisgarh, said the state government had received only 0.12 million forms as yet. This is less than 2 per cent of the state's 2001 tribal population. Nobody knows the number of expected beneficiaries but everybody does accept that it will be a small percentage of the state's tribal population. Sources in the state's tribal affairs ministry told dte that survey of 12,000 villages near forest areas was yet to begin.

Although Sarguja's district collector has sanctioned villagers' demands that gram sabhas and not tehsildars be authorized to issue caste certificates, many fear that inter-community conflicts could spoil the situation. The Baiga-Gond conflict is a case in point. The Baigas were forced to leave their habitat at the Rajarani hills in the Maikal range and settle in the foothills in Bhokrabara village. The Baigas claim they settled there before 2005, but the panchayat head, who is a Gond, claims the Baigas settled in Bhokrabara after December 13, 2005 and, therefore, are not eligible for the deeds. "It's rare that anyone would have a record of the past 75 years," says Kumar. There is apprehension among people that the forest department may be unofficially playing the role of a nodal agency on the distribution of land.

Sarin says the additional burden is because the Union tribal affairs ministry has washed its hands of any kind of funding, for maps and other documents, to help implement the Act.