Staff of the tiger reserve worked hand in glove with poachers, while the state government kept its eyes tightly shut

The forest officials of Panna Tiger Reserve worked in close nexus with poachers for over a decade, says an internal report prepared by the Intelligence Cell of the tiger reserve, which had lost all its tigers by 2008.

Spread over 543 sq km in Panna and Chhatarpur districts of Madhya Pradesh, the tiger reserve had some 23 big cats when it was conferred the status under Project Tiger in 1994. The tiger census in 2005 estimated its population in the reserve to be around 25. But over the next few years tiger experts sounded the alarm that tiger sightings in the reserve were few and far between. In 2009, after a high-level inquiry by the National Tiger Conservation Authority, officials admitted that the reserve had lost all its tigers.

The staff, from forest guards to sub-divisional officers, suppressed the cases of tiger deaths and tried to destroy evidences of poaching, says the confidential report on poaching. It was prepared after investigating cases of poaching in the reserve from 1989 to early 2011 and the forest department’s role in it. Though submitted to Principal Chief Conservator of Forests (wildlife) H S Pabla in February this year, a section of the report came to light recently through a Right To Information (RTI) application filed by Ajay Dubey, a conservation activist of non-profit Prayatna Environmental Action Group in Bhopal. Dubey shared the details of the RTI reply exclusively with Down To Earth.

The report urges the government to form a high-powered team to investigate the nexus between poachers and forest officials. But it seems the contents did not go down well with the forest top brass who have ordered verification, saying the report does not hold water.

“All the top bureaucrats who looked after the forest department when the Panna debacle happened hold top positions in the government now,” says Dubey. “They are deliberately delaying the inquiry so that the evidences can be destroyed and witnesses manipulated.”

The nexus, in black and white

“This is a clear-cut case of fence-eating-the-crop syndrome,” R Sreenivasa Murthy, who joined as the field director of the reserve in 2009 and headed the inquiry team, writes in the report. He found that at least 19 cases of poaching of large carnivores, including 11 cases of tiger poaching, occurred between 1989 and 2010. The then forest staff had registered only six cases of tiger poaching during the period (see ‘Supressed facts’). Five poaching cases occurred in 2005 alone, though the then forest staff registered only one that year.

The number of poaching cases would be much more if killing and smuggling of other wildlife animals are taken into account, the report notes. Heavy poaching of herbivores reduced the prey density in the park, leading to elimination of tigers, it adds. 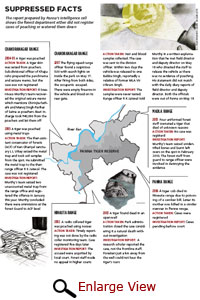 Several researchers in the past had pointed out that animals do not return when they cross the river Ken that cuts through the reserve and enter Chandranagar forest range. The report underscores their observation. Of the 19 poaching cases in the decade, at least seven occurred in Chandranagar; in five instances the offences were not registered or followed up.

In his letter to Pabla, submitted along with the report, Murthy says the period between 2002 and 2007 was “turbulent for the tigers and other animals” as the establishment of the tiger reserve, especially officials at Chandranagar and Madla forest ranges, tried to suppress the cases. He had requested to post the forest rangers, R K Jaiswal and R T Sanago, far away from Panna to ensure that the witnesses of the cases were not coerced and manipulated. The officials have been transferred.

Murthy prepared the report based on statements of at least 20 independent witnesses, both staff and people in the area, recovered articles like tiger bones, and memos and office records seized from range offices in the reserve. His team seized two metal traps from the range office of Chandranagar. These point towards the implicit involvement of the forest staff in poaching.

“With staff’s omissions and commissions the crime nexus is complete from the scene of crime (in Panna Tiger Reserve) to (well-known poachers like) Sansarchand and his network in Delhi including nomadic poaching communities, local tribes and influential people and the middle level traders like Mohammed Rise and Nawab Khan,” Murthy notes in the report.

To further investigate the matter, Murthy recommends the government constitute a high-powered special investigation team to probe the nexus between forest staff and poachers. This “herculean task” may not be possible for the establishment of the present field director. It will invite criticism and allegations from the alleged officers, says Murthy in his letter. Such investigation is important to ensure the survival and sustenance of tigers reintroduced in Panna, he added. Since 2009, the reserve authority has translocated a tiger and three tigresses from other tiger reserves in the state to repopulate Panna.

The forest department, however, is little interested in Murthy’s findings. When asked about the report, Pabla said, “We are verifying the facts in the report. All the cases mentioned in the report are old, dating back to the 1980s. Most of them have either been decided or under the consideration of court. We did not find much substance in them.” Sources in the department reveal that Pabla’s office has sent the report back to Murthy for reconsideration and more evidences to back his findings.

“With statements of 20 independent witnesses, seized tiger bones and metal traps, Murthy has enough evidence. What else does the forest department require?” asks Dubey. “Besides, he has recommended further probe by special investigation team. Why is the government reluctant to set up the team?”

This is not the first time that an inquiry report has recommended high level investigation into the Panna debacle. Experts and wildlife activists have long been demanding CBI inquiry into missing tigers from Panna. But the state government has been ignoring the demand. For long it kept saying that the tigers were lost due to ecological and scientific reasons.

In 2009, a special investigation team of the National Tiger Conservation Authority visited Panna and said poaching in the reserve was the main reason for the loss of tigers and the accountability for this must be fixed. It recommended a CBI inquiry. Such investigation was conducted when tigers were wiped out from Rajasthan’s Sariska Tiger Reserve, the only other tiger reserve in the country to have lost all its tigers by 2005. It had led to the conviction of poachers.

The Madhya Pradesh government, however, did not initiate a CBI inquiry. Instead, it set up its own expert committee, which implicated gender imbalance in the tiger population in the reserve. Male tigers often wandered out of the sanctuary while looking for tigresses, only to be poached. The forest department could not be held responsible for the loss because its jurisdiction ended within the park, said the report submitted to the state government in 2010. (see ‘Foresters blame itinerant tigers’, Down To Earth, July 1-15, 2010).

Pabla, who was removed from the post of Chief wildlife Warden after the Panna debacle but soon reinstated with a promotion, also reiterated similar arguments in a letter to the Principal Secretary of forests in January this year. The letter, obtained by Dubey through RTI, says tigers died due to “natural and unnatural reasons”; poaching was a partial factor. “Only three tiger deaths were reported between 2000 and 2009.” Murthy’s report lists nine cases of tiger poaching in the reserve during the period (see ‘Poaching cases’). In 2010, soon after the state’s expert committee presented its report before the Assembly, forest minister Sartaj Singh promised a CBI inquiry before the media. But no proposal has been made to the agency so far. Responses to Dubey’s RTI queries reveal that the minister had approved the CBI inquiry in March last year but the file has since been making rounds between the home and the forest departments.

Murthy’s report also faces a similar fate. The state government selected three cases from his report for CBI inquiry. But in April this year, it sent the cases back to the forest department for fleshing them out. Since then there has been no headway. Of the three cases proposed for CBI inquiry, two were not registered originally while the third one was cleared without investigation by the forest staff.

Murthy’s report clearly brings out the fact that the forest officials were involved in poaching of tigers. There is a possibility of their connection with international poaching networks, says Dubey. “Besides, I was given only a portion of Murthy’s report. There could be more shocking facts regarding Panna that the government is hiding,” he adds. Dubey plans to file a public interest petition in the Supreme Court to order a CBI probe into what went wrong in Panna. “It is unfortunate that the entire tiger population was killed in Panna and no one is responsible for it,” he adds.