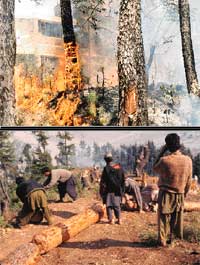 Tall pines enveloping the mountains, is the image most commonly conjured up when one talks of the Himalayas. Few, however, know that many of these conifers are in fact forced entries and largely responsible for the fragile state of the mountains.

Before the British entry into India, the Himalayan forests existed as a verdant canopy of deciduous and evergreen trees, including these conifers. But the early 19th century witnessed a mass exploitation of trees like oak, sal and deodar for commercial use by the British, leading to a substantial loss of the original cover. Large-scale pine plantations in place of the other trees for procuring resin later in the 20th century further depleted these varieties. Unfortunately, the trend continues even today with fast-growing exotic species like eucalyptus, pine and Japanese cedar replacing the original forests. Recent figures show a decrease of 560 square kilometres (sq kms) in Mizoram and 440 sq kms in Himachal Pradesh in the dense forest cover from 1997 to 1998. The major ecological fallout of this assault has been the degradation of the soil which in turn has prevented the growth of other trees and shrubs. With the forest ecosystem failing to recover to their original state, desert-like conditions have now arisen in many parts of the Himalayan region, particularly Meghalaya, Ladakh, Kumaon and Garhwal. Although different types of Himalayan forests have come under severe attack in the last century, assault on oak has been particularly brutal. This despite the fact that the oak tree is regarded as the hill people's best friend. It has the ability to absorb water for a long time and release it slowly. This gives rise to springs around which hill villages have been established. Its leaves are used as fodder. Its rich undergrowth of grass protects the soil from being directly hit by rain, and its wood is used for making agricultural implements. Considering, the zone of human settlements and oak broadly overlap each other, it is quite unfortunate that the prevailing forestry system has shown a distinct bias against the oak forest ecosystems.

Prior to British entry, the human population in the Himalayas was low and native forests were in abundance to support the limited needs for agricultural products. These forests were also able to meet the demands of construction and cottage industries, such as iron smelting, charcoaling, and mining at subsistence level. But the colonial rulers encouraged agricultural activity in the Himalayas immediately after their arrival to generate revenue. Sal was largely exploited during the pre-railway era when organised forestry had not been conceived. Its exploitation further increased in the early railway era and with military demand of the subsequent two world wars. When sal became scarce to meet the requirement of railway sleepers, deodar came under the axe. Chirpine, however, was not exploited until improved technology for resin processing was made available in the beginning of the 20th century. Over the years, it has become an important revenue generating source for its resin yielding potential. For this reason, this species continues to enjoy patronage even today, constituting the lion's share of the forest cover. The reach of the chirpine can be gauged from the fact that in 1980, their plantation in the Himalayas extended to about 20,000 hectares (ha).


A major factor that contributed to the rapid march of chirpine plantation was its capacity to regenerate early in comparison to other trees like sal and deodar. It also has the ability to spread from hill base to higher elevation, and from ridge top to lower elevation, thus encroaching upon areas where oak and broad-leafed forests respectively are located. Also pines bear seeds at a very early age that too in plenty and round the year. As the seed is much lighter than that of the deodar, it is easily carried by the wind and scattered all over the place. Where circumstances are favourable like sufficient water and light, it reproduces in great numbers. This is citied as the possible cause of ecological dominance of pines over other trees in the Himalayas. When pine invades the site, it prevents a possible reinvasion of oak through adaptional strategies. For instance, its leaves form a mat-like cover over the soil, preventing any other growth. The enormous carpet of the dried pine needles, which are highly infammable, has been the cause of several forest fires in the region in recent years. Moreover, with pine having virtually no capacity to retain water, its growth has resulted in the drying up of springs. It has very little canopy and does not permit any undergrowth of grasses, thus leaving the mountain slopes fully exposed to the erosion by rain and wind. Its leaves cannot be used as fodder, and have a high acid content, which makes the land infertile. Ironically, despite these negatives, monoculture of chirpine in the Himalayas is still rampant.


With the man-mountain equation changing due to greed and commercialisation, the forests are no longer seen as a pure form of nature, or having any great importance as far as the environment and ecology goes. Instead they have, as a money generating source, become a mode of business. To arrest this trend, which could spell a major ecological disaster in future. Ecologists advocate a proper balance between monetary concerns and environmental protection. The Finnish practice is a point in case. Finland has a huge forest resource and its economy is considerably dependent on these resources. This is particularly true of pulp and paper industry which contributes 40 per cent to the economy. By imposing strict regulations for environment conservation, Finland has been able to protect its forest cover. Similar practice can be initiated in India also. Mixed tree plantation as per the elevation of the slope, which stops the impoverishment of the soil, recharges the springs and improves the quality of water, is another option.

Besides, it is the mountain people themselves, especially women subsistence farmers, who can play a crucial role in securing this region's future. Linking their indigenous wisdom with modern technical expertise in any development measure will be helpful in keeping this region's ecology safe.