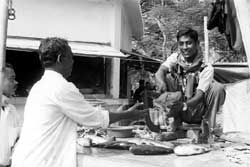 Till last year, Chittaranjan Locomotive Works (clw), in West Bengal was just another nondescript place. Today, the walled railway township is hitting the headlines for its anti-plastic drive, which commenced in right earnest at the start of the new year. The campaign follows a statewide ban from January 1, 2002, on plastic bags which are below 20 microns in thickness, in other words those which cannot be recycled. Rather than following just another government order, the residents of Chittaranjan have taken the concept a step forward by extending the ban to all kinds of plastic bags and initiating an immediate purging process. "We had issued an appeal throughout the township last November to ban the distribution and use of plastic carry bags from January this year. But people voluntarily started the practice from the very next day itself," says A K Majumder, deputy general manager (dgm) and estate officer of clw, who has been instrumental in putting the ban in effect.

Even the shopowners seemed to have welcomed the move. Almost all the 3000-odd shopkeepers have the dgm's appeal displayed prominently at the entrance door in a bid to dissuade their customers from using plastic bags. As a result, more people are now coming out in favour of this idea. "Though it is a bit problematic to take fish in saalpattas (containers made of leaves) and thongas (paper bags) we fully endorse the ban knowing the pollution causing potential of plastic carry-bags," says Ranjit Mitra, a clw resident.

The entire effort is linked to a greater commitment towards eco-drive. Banning plastic bags is only a part of this endeavour. "Prior to this, it was a common practice to litter thin plastic bags all over the place, causing sewerage outlets to get choked, leading to various environment-related hazards," says Majumder. "Since we have applied for an iso 14000 certification for our township, we did not want to risk losing out on it due to the plastic menace. If we get it, then we will be the first township in eastern India with this certificate," he adds.

However, many feel that the administration is over-reacting. Some residents are not convinced that a blanket ban will achieve anything. Indian Plastic Federation (ipf), the umbrella body seeing the interest of plastic industry, is also criticising the move. "We have nothing against this ban on the plastic carry-bags under 20 micron and in fact we are working in close coordination with pollution control board to implement it. But in certain areas like Chittaranjan, Berhampura and South Dumdum, plastic bags per se have been banned, which is absolutely illegal," says Arup Chatterjee, association's executive secretary. "To avoid the confusion amongst shop owners, we have advertised in newspapers specifing the particular type of plastic carry-bags, they can use. Let us tell people that plastic use is not the problem, plastic littering is," explains R A Lohia, president of ipf.

Non governmental organisations (ngos) like 'Ekta Ecological Foundation' or 'Agency for Better Calcutta' are working in tandem with ipa to spread the proper message. Even the appointed state environment secretary and ceo of state pollution control board, Ramasubban admits the importance of awareness generation in this context. "Let us clarify that plastic is not banned, only the plastic carry-bags upto 20 microns thickness are banned. We know that in certain pockets, people have tended to equate the two. We have already started an elaborate campaign with bill boards and leaflets where we will categorically state the weight and other details of the carry-bags to be used," he says. He feels that once that is done the confusion will be automatically taken care of.

Chief engineer Dipak Chakrabarty and senior engineer of planning Tapas Gupta, of Pollution Control Board are, however, hopeful of the success of the ban despite the apparent problems. "We carried out a market study just before implementation of the ban and about 70 per cent of the people supported the move," they said. But will the ban sustain in the entire state? According to environmentalists, the answer lies in mainly two factors: firstly, administrative will and networking and secondly, availability of alternative. Otherwise, they feel that the incidence, like Chittaranjan will be an exception rather than a rule in West Bengal.