People in Mendha-Lekha village in Maharashtra fashion plates out of locally available leaves. avilash roul learns lessons in sustainable forest use from these villagers 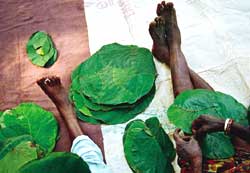 A tricolour bamboo gate -- that reminds villagers of India's national flag -- welcomes outsiders to Mendha-Lekha village in Dhanura taluka in Maharashtra's Gadchiroli district. The gram sabha of this village of 400 Gond tribals is in session: the villagers are vociferously debating how best to conserve water, even while they go about fashioning pattals (paper plates) from mahur (Orthanthera viminea) leaves with insouciant ease.

Sixty-year-old Tarabai's eyes exude a glint that even her thick spectacles can't hide. "Making these plates make me very proud. It reinforces my kinship with the jungle," she says. Almost everyone in Mendha-Lekha collects mahur leaves. And whenever a gram sabha is in session -- or the villagers congregate for any social gathering such as a marriage function -- they make pattals, cups and ropes and from leaves and barks of mahur. The creeper can be found throughout the year in a 1806-hectare deciduous forest that makes up more than 90 per cent of the village land. The forest hosts plant species such as tendu, char, bamboo and ain.

The villagers have conserved this forest for the last 20 years. The mahur leaves are classified as minor forest produce, but the villagers have negotiated with the forest department and don't have to pay for it. The forest also caters to all domestic requirements of the Mendha-Lekha residents. Strict rules ensure that the exploitation of the forest is sustainable and two villagers always patrol the area to guard against any foul play.

The mahur leaf plates can be preserved for 5 or 6 years, though the people have to take care that the pattals don't come into contact with water -- that can make them dry and crinkly in the long run. Says Tarabai, "You don't have to wash or clean these plates like other utensils. The villagers can make various sizes of plates. For example, we make larger plates for non-tribal people for their palate consists of various recipes at a time." The leaves are stitched together with khadis (bamboo sticks) that are available in plenty in the forest.

Plate-making is performed as sramdan (voluntary labour). It fosters a sense of community involvement and unity among the villagers. Mahila Bachat Ghat (women's saving groups) take care of these activities. Each group consists of 10-15 members and there are eight Mahila Bachat Ghats in the village.

Today, Mendha-Lekha's residents are planning to sell their pattals to nearby villages. Initial commercial prospects do not seem promising: 100 plates can fetch Rs 35 at most. But this has not deterred the residents of the village. One of them, Sonji Bai Duga, notes enthusiastically, "It's good to make some money by making these plates." Somji Kundu Daro, the newly appointed chairperson of the gram sabha, agrees. "It's a good leisure time activity. We are planning to organise commercial sales of pattals in future. But these transactions will have to be governed by some principles," he says.

Already, there are some rules in place. Through its unique consensus-guided decision-making process, the gram sabha has decreed that everybody who wants to purchase the plates has to come to the Mendha village assembly or the sibirs (common godowns) of the village. Quips Daro, "The transactions will be limited with only the neighbouring villages. And no transaction will be done outside the village premises."

When participatory management of natural resources is the need of the hour, Mendha-Lekha has shown the way.