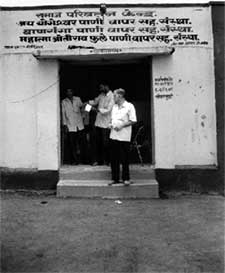 Two home truths about irrigation departments across India: they are a fountainhead of corruption and run on huge losses.

But July 2002 may prove to be a watershed for rural water supply management. Around that time, the Maharashtra government will hand over control of irrigation facilities to the state's farmers -- a first for the country. Experiments conducted by non-governmental organisations (ngos) over the past decade indicate that on both counts -- graft and economic viability -- devolution is likely to spawn a turnaround.

The programme has its genesis in cooperative formation in 1989 by ngos such as the Pune-based Society for Promoting Participative Ecosystem Management (soppecom), the Nasik-based Samaj Parivarthan Kendra (spk) and the Bhusaval-based Sane Guruji Shram Seva Kendra (sgssk). But in many ways, it will be back to the future because cooperatives were managing water systems prior to the setting up of government-controlled irrigation departments. To date, about 250 societies covering over 1,00,000 hectares (ha) of land have sprouted in Nasik, Marathwada and Amravati. These local bodies form water users' associations (wua)s, which manage irrigation systems.

The administration was initially averse to delegating authority, guided as it was by the Chitale Commission report of 1999. The panel observed that farmers were not interested in handling irrigation systems. But armed with case studies of successful wuas, ngos have forced the state government to reconsider its opinion. "We are going in for change as experiments showed us that cost recovery was higher when farmers were in charge as compared to the irrigation department," admits S Y Shukla, principal secretary in the department of irrigation. What has tilted the scales in favour of cooperatives are success stories such as the Nasik-Ozhar one (see box: The Nasik-Ozhar model ). The Ozhar-based Jai Yogeshwar Society and M Phule Water Society retrieved 87 per cent and 95 per cent of the costs, respectively, for the year 2000-2001 whereas government recoveries were a mere 25 per cent in most cases.
Under the new arrangement, farmers will be mainly allowed to operate and manage minors comprising supply and field channels that originate from major reservoirs (see flow chart: The new equation ). Water will be made available to cooperatives on a volumetric basis at a fixed price by the irrigation department. The deal includes freedom to farmers to decide the price at which they purchase water from societies. The administration hopes to save 70 per cent of water and also increase crop area, apart from maximising cost recovery. To form a cooperative, either 51 per cent of the water users have to enlist as members or a minimum area of 400 ha should be under agricultural use.

Though the proposal to transfer power has been approved in principle (see box: Government notification ), the July 2002 deadline is as yet tentative, says Shukla. "The government is looking at logistics and imparting training to farmers to raise awareness levels," he adds. For this purpose, the services of Aurangabad-based Water and Land Management Institute (walmi) are being utilised. soppecom secretary K L Joy says, " walmi calls us for lectures, but that is not enough."
The physical status of the irrigation structures will go a long way in shaping the farmers' water management capabilities. As cooperatives lack the wherewithal to carry out repair work, they want the authorities to overhaul the supply systems before handing them over. Rajubhai Kulkarni of spk and chairperson of the M Phule Water Society avers that the government must shoulder this responsibility. "It is pivotal for the scheme's success," he says. Another impediment faced by the local bodies is the snail's pace at which government work progresses. "Though some wuas were formed in the nineties, construction and maintenance is still not complete," points out Kulkarni.

According to Shukla, the government will initially help local bodies in decision-making and gradually withdraw from active participation. Farmers would be in charge of future maintenance through a consolidated fund created with contributions. Under the programme, the cooperative and the irrigation department will have a joint fixed deposit bank account. Ninety per cent of the contribution will be made by the irrigation department, while the cooperative would put in 10 per cent of the funds. The interest generated will be used for maintenance and administrative works. The cash-strapped administration is holding informal discussions with the World Bank (wb) for assistance to meet its share of the financial commitment. "This suggests it's a wb-driven project, not a government one," says economist R K Patil, who is also working with soppecom.


Equitable allocation of water is a prerequisite for optimising usage. To ensure this, cooperatives hold a meeting of the beneficiaries where issues such as the quantity and price of water are decided. About 15 to 16 cooperatives under a farmers' association discuss the requirements from a single project. After the proposal is passed it goes to the irrigation department, which releases the required water.

The government is planning to adopt the command area management development subsidy scheme for the state. As efficiency increases, subsidies and incentives are introduced. "If a cooperative pays the bill on time, it will get a subsidy of 5 per cent," reveals Shukla. Elaborating on the format, Joy says, "Apart from the 5 per cent discount that the government offers, cooperatives have a provision for a 20 per cent reduction in the wholesale rate subject to wise use of water." About 15 per cent of water goes to women's groups and landless labourers who can take tracts on lease. For non-members, the society can charge up to 30 per cent extra to sell water.

Water is given for a period of eight months. Its supply can, however, be staggered over the whole season. It is distributed first to tail-end farmers (those whose fields are located farthest from the feeder source).

The question of water getting diverted during a lean season is a major cause for concern. Bharat Kavale, a pioneer of the Nasik-Ozhar works, takes government officials' assurance on judicious supply of water with a pinch of salt. "During a drought, there is large-scale channelling of water for industrial and drinking water purposes at the cost of irrigation," he laments.


To manage the overall distribution, laws are being framed. The Irrigation Act will be modified within the next couple of months, reveal official sources. Certain rules are already in place. The society is vested with the power to impose and collect fines.

But Patil says that the government has rejected by-laws suggested on the basis of experiments. For now, there is also no proper monitoring of the cooperatives' activities.

Maharashtra is on the threshold of a new era where power is percolating down to the grassroots. If successful, the model could be emulated nationwide. And the faucet turned on to end farmers' water woes.