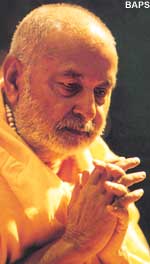 Modesty could very well be his second name. Seventy-one check dams, 55 percolation tanks, 33 ponds, 22 nullahs and 60 gully plugging - 241 rainwater harvesting projects in just nine months. But Pramukh Swami Maharaj is humility personified. His refrain: "This is not enough. We can do more."

The mantle he donned, that of the fifth spiritual head of the Bachasanwasi Shri Adshar Purushottam Swami Narayan Sanstha, wasn't weightless. Like his predecessors, he had to indicate a path to harmony. It was exacting, just till Swami found one in "practical spiritualism". So during the 1987-88 Gujarat drought, he asked his 680 sadhus to set aside meditation and suspend religious activities and instead concentrate on water-related works. A move which perhaps did raise a few eyebrows. But Swami believed, "Socio-spiritual organisations are at an advantage of convincing and directing people to take up developmental works."Today, his work is spread across 8,100 centres worldwide.

Success, though, hasn't come easy. Villagers of Ugamedi in Bhavnagar district of Gujarat refused to cooperate. Ironically, in this case, it is not the "society's redeemers" who are irked by the caste hierarchies. It is the villagers who felt overwhelmed by the caste system. But not one to give up, Swami ordered his followers to go ahead and construct a chota talab (small pond). The prodigals returned to their saviour. Among other things, it meant a saving of Rs 2.5 lakh every month, which was earlier used for buying water.

Neighbouring Ningada's story is no different, only that in this case the villagers were waiting for the government to do the needful. Here too, the heedless sadhus took the onus upon themselves. Water is now available even 3-4 months after the monsoon, but government officials are not.

"Being an agrarian society, water is jeevan dhara (lifeline)," says Swami, who firmly believes that the concept of rainwater harvesting is essential to India. "To ensure societal sustainability, water conservation is not only a necessity, but also a responsibility". And sadhus have an important role to play. This from an individual who practices what he preaches in a state where many of his ilk threaten to take people to the dark ages.