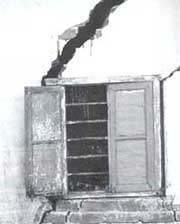 "WE ARE waiting for doomsday," says 23-year-old Ramraj Tiwary, grandson of Pandit Bajrangbali Tiwary, the priest of the erstwhile Jharia estate.

One more tremor and the country's coal capital, with a population of 4,00,000, will subside and disappear. "What is more tragic is that the public sector giant Bharat Coking Coal Limited (BCCL), instead of trying to shift the people to safer places, is busy digging their graves," says Tiwary resignedly. BCCL warns that if some catastrophe takes place it would mean death of thousands of people. "We don't have any plan to rehabilitate the entire population as we don't have money," say BCCL sources in a matter-of-fact tone.

The two statements sum up the impending fate of Jharia, India's oldest and largest coking coal producing area. While doom knocks at the door of those who have lived there for generations, BCCL, crippled by financial crises and mismanagement, pleads helplessness. In fact the October 27, 1996, tremor came as a preface to the impending tragedy.

After finishing their day's business, in a mild drizzle, people had assembled at Sadhan Kutir near Jharia's Katras More at 8 pm to give final touches to their preparation for kali puja. But before they could get down to it, a massive subterranean blast and subsequent explosions shook the entire area. Walls, roofs and floors cracked. Panic-stricken men, women and children rushed out of their rattling houses. The panic run was abetted by the disappearance of a family into a ghost crack that had formed beneath their house.

"We found ourselves in a similar trap," says Haldar Prasad Choudhary, a school teacher. "When we sought help, BCCL sadistically put the blame on us, called us encroachers and said we must vacate the area on our own." While BCCL management showed no sympathy, a committee of Bihar Legislative Council members headed by Gautam Sagar Rana rushed to Jharia for an on-the-spot evaluation. Rana said neither the state government should allow people to commit suicide nor should BCCL be allowed to turn its mines into a mass grave. The House committee summoned the Dhanbad deputy commissioner to provide details of its contingency plan to rescue the people in case of an emergency.

Meanwhile, the Jharia Bachao Samiti (Save Jharia Campaign committee) accused BCCL of hatching a conspiracy to commit mass murders so that it can extract over two lakh tonnes of prime coking coal from beneath the Jharia township. As a part of the conspiracy, BCCL was indulging in underground blasting despite a ban imposed by Director General Mines Safety (DGMS), said the samiti convenor M B Pramanik. According to Pramanik, on the night of the tremor, BCCL used heavy explosives in a bid to recover two site discharge loader (SDL) machines.

The consequent tremor caused cracks in the mine roof that supports a large number of settlements. Similar explosions in future might devour the entire area. BCCL sources, while denying that the blast caused cracks, said soon after the cracks developed BCCL appointed an expert committee headed by former DGMS H B Ghosh which concluded that cracks developed because of the movement in the old goaves and warned that similar damage in future could not be ruled out. "Under these circumstances, prevention of damages is not feasible and, therefore, remedy lies only in evacuation of the buildings," BCCL sources said.

Ever since a criminal case was filed against BCCL, the management has been claiming that most of the residents are encroachers. It was alleged that BCCL officials, by virtue of their power and position, have been conspiring for a long time to usurp the ancestral properties of the residents to increase coal production. BCCL claimed that through nationalisation it not only got underground mining rights but also the right over the surface; hence all those living in the area were illegal settlers.

Dispute over the rights of the people apart, the entire area is facing the danger of subsidence due to unscientific mining by private mine operators in the pre-nationalisation days, organised loot and plunder in the name of sand stowing since nationalisation, and the rapidly-spreading underground fire. BCCL officials say the company is still fighting to cope with 60 fire zones spread over 1,732 sq km of inhabited area. It admitted that extraction of thick seams by caving at shallow depth has resulted in subsidence and cracks reaching up to the surface.

A study conducted by BCCL recently stated that in addition to spontaneous heating, the blaze has been aggravated by the burning of ban tuhi (a wild plant), dumping of hot ash in goved out areas and fire in quarry debris. BCCL said some of these fires existed since 1916 while the Basuriya mines fire was new and spreading dangerously, threatening inhabited areas.

In fact, the Basuriya fire is already reaching the doorsteps of 300 houses in Tiwary basti through which a highway and railway lines cross. Standing close to a heap of smouldering ash, Dinesh, a local resident says, "We are living with fire." Villagers say that flames reach their houses and while sleeping they feel suffocated due to excessive heat and the presence of carbon monoxide gas.

According to BCCL sources, during the past eight decades, underground fires consumed about 350 lakh tonnes of coal while about 500 lakh tonnes of prime coking coal was inaccessibly trapped. A BCCL report also stated that some of the fires had endangered production outlets, surface structure, railway lines, roads and drainage channels. A couple of months back, BCCL sent a report to the Eastern Railway authorities warning them of the impending danger. Also in a recent survey, a World Bank team had pointed out that Pathradih-Dhanbad railway line, Adra-Gomoh line (Southeastern Railway) in the Bagmara region and Basuriya line faced severe threat. However, an official associated with mines research wing of the railway board dismissed it as yet another ploy to recover more coal.

The railway authorities in Calcutta said as soon as it received the letter it referred the matter to the Geological Survey of India which suggested some short and long term preventive measures. Meanwhile, Eastern Railway chief engineer K N Singh, who inspected the sites, said, "We are not sure how serious the problem is because nothing is visible on the surface." But the railways have already started monitoring the underground temperature and have erected subsidence pillars. "We have also introduced speed controls on trains passing through the threatened stretch and track patrolling has been intensified." He admitted that sometime back the fire had surfaced quite close to the railway tracks but its advance was checked by digging fire isolation trenches.

Whatever the BCCL or railway authorities may say, residents of Jharia township are virtually sitting on fire. As the people say, it could turn into a mass grave any moment.