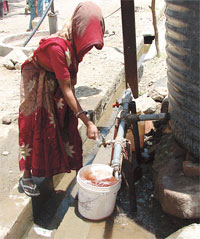 People in the villages around Ratlam are paying a heavy price for living near the industrial town in Madhya Pradesh. Their groundwater has been polluted by over 23,500 tonnes of hazardous waste dumped at two factory premises and other sites in Ratlam. The quantity of toxic waste lying at the defunct Union Carbide plant in Bhopal city—350 tonnes—is only a fraction of Ratlam’s toxic legacy, but it has been written about much more.

The Public Health Engineering (PHE) department in Ratlam has identified seven villages as affected by groundwater contamination caused by the toxic waste. These villages are within a distance of 10 km from the two chemical factories—Sajjan Chemical and Investment (pvt) Ltd and Jayant Vitamins which closed over a decade ago due to management problems. A study by the Central Ground Water Board (CGWB) in 2004 reported the water in the villages was very saline and had high concentration of nitrates, chlorides, sulphates and phosphates. In some villages the chloride level was five times higher than the maximum limit and the nitrate level was three times the limit prescribed by the Bureau of Indian Standards. The study said the toxic discharge has seeped into the deeper aquifers.

Another study by Madhya Pradesh’s State Pollution Control Board (SPCB) in 2007 showed the soil in the area has been contaminated with organic pollutants like naphthalene and binaphyle sulfone. More recently, in March 2011, a study by the PHE department found the total dissolved solids (TDS) and iron levels in groundwater were way beyond permissible limits. The TDS levels in some of the samples was about 3,000 mg/litre; its permissible limit is 2,000 mg/litre. “The water is red mainly because of iron, which along with other contaminants makes it unfit for consumption,” says Lokesh Dyma, a chemist with PHE Ratlam.

Despite the poor quality of water and seven site inspection reports since 2005, the authorities have made little effort to set things right. The water supplied through tankers is irregular. Sitabai, a resident of Bajankheda, one of the seven affected villages, says the handpump in front of her house used to yield sweet water till about 15 years ago. These days, her family of 11 depends on water from tubewells two kilometres away because the handpump now yields red water.

Residents of other villages, too, complain they have to walk further away from Ratlam to get potable water. For bathing, washing and irrigation, people are still using the contaminated water. “Bathing in this water causes itching, clothes washed in this water start tearing after a few washes,” says Kailash Bai, a 40-year-old resident of Jadwasa Kala village near Bajankheda. “We have been pleading with the government but no one cares,” says Virdi Bai, the sarpanch of Bajankheda. There has been no study to assess the impact of the groundwater pollution on human health.

Santosh Srivastava, executive engineer with PHE, Ratlam, says his department has proposed a scheme under which piped water from the Gunawat dam on the river Malani would be supplied to the seven villages. But the scheme is yet to be sanctioned. Paras Saklekha, MLA from Ratlam, says the administration is lying that only seven villages are affected. “This is old data. Close to 60 villages are affected and their number is increasing as the waste has not been removed.” Saklecha has repeatedly raised the matter in the Legislative Assembly.

There are also reports of two industries selling 4,975 tonnes of hazardous waste illegally, without taking permission from the central and state pollution control boards. But the pollution control agencies have taken no action against Bordia Chemicals and Beta Napthol.

Nilesh Bordia, son of the owner of Bordia Chemicals, says the company took permission from the Madhya Pradesh SPCB to sell gypsum sludge to cement manufacturing units and sodium sulphate to two chemical factories in Ratlam and in Rajasthan about eight years ago.

But V B Apale, in-charge of the Hazardous Substance Management Division of the Madhya Pradesh SPCB, refutes this. “The Bordias have not taken permission from us. What they have done is illegal,” says Apale. The SPCB, however, is not aware of what happened to the 600 tonnes of toxic waste removed about three years ago from the premises of Beta Napthol factory near Maksi village, 120 km from Ratlam. “It is a shame on both CPCB and SPCB. First, they fail to clear the waste which is contaminating the water for more than a decade. Second, they don’t know what is happening to the waste,” says Ajay Dubey, secretary of Prayatna, a Bhopalbased non-profit. Dubey had filed an application under Right to Information Act in September 2010, seeking information about illegal dumping sites of hazardous waste in Madhya Pradesh. The SPCB has designated the four factories in Ratlam and near Maksi as illegal dumping sites.

The waste has been dumped and stored carelessly. Sajjan Chemical has dumped 23,472 tonnes of waste at three places— in a concrete pit within its premises in Dosigaon industrial area; in a broken shed near the factory and in Khandarwasa mines 16 km away, says SPCB. In their 2008 site inspection report, consultants hired by the Union environment ministry to study management of hazardous waste in Ratlam—SENES Consultants of Noida—found coloured water leaching from the concrete pit of Sajjan Chemical. A court case is pending against the company before the chief judicial magistrate of Ratlam for mishandling the waste; SPCB is the complainant in the case. The premises of Jayant Vitamins is under court’s custody and no one is allowed to enter the premises. The quantity and manner in which the toxic waste is stored at the premises is unclear (see ‘The polluters’).


Dubey says the state should give priority to disposing of the toxic waste, and not wait for the cases to conclude. The Madhya Pradesh SPCB had submitted a proposal to CPCB in 2008. It suggested disposing of the waste at the Pithampur hazardous waste facility in Dhar district of the state at a cost of Rs 6.6 crore. “The main problem is lack of funds. That is why we could not initiate the project,” says B Vinod Babu, incharge of hazardous waste management in CPCB. The “polluter pays” principle has failed in India, he adds. The Hazardous Waste Management Rules of 2008 say polluters should be penalised but no such action has been initiated against the Ratlam industries.

Khushal S Rajpurohit, an environmentalist in Ratlam, calls lack of funds a mere excuse. “Who will take care of public interest?” he asks. At least a state like Madhya Pradesh, which is yet to recover from the Bhopal gas tragedy, has some responsibility towards removing hazardous waste, he says. The Industry is at fault, but the pollution control agencies are more to be blamed for the mess because they failed to take action against the errant companies, he adds.
Water Pollution Waste Management State Pollution … Ratlam (D) Madhya Pradesh Industrial Pollution Health Effects Health Effects Health Effects Hazardous Waste Groundwater Quality Groundwater Pollution Chemical Industry Chemical Industry Chemical Industry Special Report Special Report Union Carbide plant Bhopal Bhopal Central Ground Water … Bureau Of Indian …
SUPPORT US