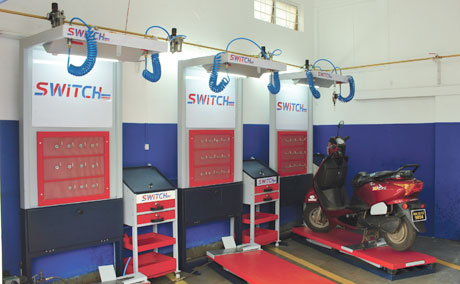 Once famed as the bicycle city of India, Pune has lost that reputation because of rising number of motor vehicles. It can once again host a quiet and clean transportation system, albeit with a twist. The Maharashtra transport authority has approved a scheme under which Puneites can hire electric scooters that emit absolutely no exhaust gases.

Called Switch, the scheme is the brainchild of ET Elect-Trans Ltd, a subsidiary of e-bike manufacturer, Electrotherm India Ltd. The authority approved the scheme in May as per the rental rules of the Motor Vehicles Act.

To start with, Switch has rented out 50 e-scooters to individuals, express delivery services and corporate houses on a monthly rent of Rs 3,350. Unlike the regular 250-Watt e-bikes available in the market which have a speed limit of 25 km per hour, these scooters are of 750 Watts, can run at 50 km per hour and require vehicle registration. Demand has already picked up. Polls conducted by city radio stations showed 80 per cent of the respondents were willing to hire the scooters. “We received some 500 requests within a month of launching Switch,” says Dilip Nandkeolyar, chief executive officer of ET Elect-Trans. Most requests are from delivery services, students, IT professionals and housewives, he adds.

“It is economical and comfortable,” says Sunil Kaygude, who works for a delivery company. He was among the first ones to hire an e-scooter since Switch was launched. He now saves Rs 3,000-Rs 4,000 a month, spent earlier on fuel and servicing of his motorbike. The scheme has brought liberty to Shweta Adyanthaya, a music teacher who was tired of the dismal bus service and arrogant auto-drivers in the city. She now rides her rented e-scooter daily to her school, gym and music institute. “It is non-polluting, smooth and quiet,” she adds. “Switch is a boon to me,” says Vijay Rathi, owner of Anand Medicals. He has hired two e-bikes for his employees and plans to hire more once the scheme is in full swing and rents out vehicles on a pay-per-use basis. 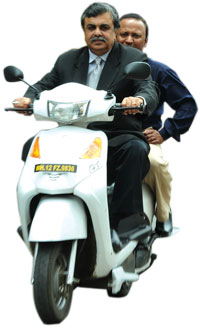 But Puneites may have to wait for another four-five months for this. Switch plans to launch 4,000 e-scooters to cater to the entire city. “To facilitate the service, we need to set up 400 rental stations, equipped with charging points,” says Nandkeolyar. Technicians will be available round-the-clock to offer maintenance. But the delay is due to paucity of funds and no support from the state government, he adds. “The government can help us by waiving the 2 per cent octroi it charges on products entering the state and by providing space for setting up rental stations,” he adds.

The Chhattisgarh government has offered to set up charging stations for launching Switch in its four cities.

Officials with the city administration hope Switch would help improve Pune’s air quality. It is among the worst polluted cities. With 320 two-wheelers per 1,000 people, the city has the highest motorbike ownership in the country.

E-vehicles contribute to pollution when emissions from power plants are taken into account. But except fine paticulate matter and sulphur dioxide, rest of the pollutants are negligible. As per an analysis by the Asian Development Bank, an electric two-wheeler emits 15 per cent less CO2 per passenger per km when compared with a bus with 50 passengers. When compared to petrol motorbikes, it performs very well on almost all parameters, it notes.

“Indian conditions need powerful e-vehicles (like the one rented out by Switch) to compete with petrol motorbikes,” says Pounit Varshney of Electrotherm. To ensure that the market is not flooded with low-quality Chinese products, e-vehicles should be registered and tested as regular vehicles, he adds.