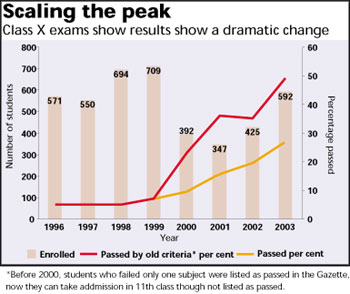 In Ladakhi, lango khel means conquering the highest point of a pass in the mountains. In Ladakhi schools, it means the matriculation (class X) examination. From 1947 to 1998, matriculation results in Leh district hovered between 0-5 per cent. The reasons are not difficult to fathom. Children grew up speaking Ladakhi at home but learned their lessons in Urdu, the official language of the state of J&K. After middle school, the language of instruction changed to English. There was great shortage of teachers, corporal punishment was common and teacher absenteeism had as much to do with lack of training and incompetence as with non-Ladakhi teachers getting unwillingly posted to far-flung, intolerably cold corners. Textbooks used terminology and symbols such as fan, train, ship, sugarcane and coconut, which are as strange in Ladakh as snow in Chennai. "There was no recognition in the education system that though Ladakh is a part of India, it is Central Asia for all practical purposes," says Rigzin Spalbar, LAHDC's executive councillor in charge of education, who is at the centre of an education reform process.

Things started changing in the 1990s. In 2003, the matriculation result went up to 49 per cent (see table: Scaling the peak), with a government school in remote Turtuk recording a 100 per cent result. This quite unbelievable change was achieved with some remarkable synergy among social groups and politicians.

The root of the reforms lies in the work of a social group, the Students' Educational and Cultural Movement of Ladakh (SECMOL) headed by Sonam Wangchuk, an engineer by training and educationist by choice. While reading the National Policy on Education of 1968, Sonam had learnt of village education committees (VEC). These committees had parents working closely with teachers to ensure the smooth functioning of a school and maintenance of its essential infrastructure. SECMOL took up a government school in Saspol village in the early 1990s, formed a VEC and trained its teachers in widely acknowledged tools to make education interactive and interesting. It changed the medium of instruction to English by consensus. The results came in three years -- a private school had to shut down as all the students shifted to the government school. These elements became a part of an integrated education reform package called Operation New Hope (ONH).

As Ladakhi politicians were closely involved with SECMOL, since its inception the LAHDC adopted ONH as its education policy soon after its formation in 1995. The first move of the autonomous council towards reforming Ladakh's education system was the creation of a VEC in every village (to support and monitor the schools). Phuntsog Angchuk, a resident of Saspol who chaired the VEC in the mid-1990s, can show you the rooms of the school that VEC members built with free labour. The next step was making English the medium of instruction from the primary level onwards. The fact that Ladakh was under President's rule helped. The state government would not have agreed to replace Urdu.


Now, the challenge was to take the Saspol experience to the remote parts of Leh district, especially in the Changthang Plateau bordering Tibet. "We are short of resources and most of our students are first generation literates. To improve the performance of high schools in remote areas, we had to pool the resources of several schools into one and provide residential facilities to the students," says Spalbar. This meant that several schools had to be downgraded, a very unpopular move that the state government would never have approved of. To ensure that any change was a result of popular consensus, politicians started holding public meetings . The council does not approve any additional educational funds till the village community shows interest. Says Spalbar, "We knew that the reform had to be managed at our level. So, we simply avoided procedures that would require approval of the state government and instead relied on popular consensus."

The first area picked up in 1997 was the Durbuk block on the Changthang plateau bordering Tibet. The weather here is harsher than in the rest of Leh district. The block had three middle schools and one short-staffed high school in Tharuk. The villages in Changthang are small and scattered. Students had to walk long distances to reach the high school. SECMOL offered to design and build a solar-heated residential school in Tharuk with financial help from a donor agency. The villagers agreed to downgrade the middle schools to primary schools. But, this was done at the district level by moving teachers around, without seeking any state government approval. Work on the school finished in 2001. Every family in all the villages contributed four weeks of voluntary labour, which amounts to Rs 14,00,000. The management board created to run the school included members of the community, the LAHDC, SECMOL and two students' representatives. Since then, three high schools and three primary schools have been provided residential accommodation in Leh. Spalbar clarifies that this centralisation is only to pool resources. "As reforms settle in, we would decentralise the school system," he promises.

The solar-heated building of the residential school in Tharuk requires no heating in winters: the school can stay open in winters and close for vacation in summer when children help their parents in the fields. "We think that the schools can impart vocational training by shutting down in summer, so that the children can learn agriculture," says Wangchuk. Besides, attendance goes down in summer anyway. Since there is very little activity in winter, it is the ideal time to study.

LAHDC now plans to change vacation timings across Leh district. Instead of shutting down from December 15 to the end of February, they plan to open schools on February 1. The month taken away would be divided into two 15-day holidays during the sowing and harvesting seasons. But changing vacation timings is a difficult proposition because Ladakhi winters are very cold and unless heating arrangements are made in schools, it is impossible for them to function. The council is trying to mobilise public opinion on the issue. It has taken the first step in Nubra valley, where providing heating is not as difficult as in rest of Ladakh, thanks to an abundance of vegetaion. Schools here would open in February in the coming year. This experience would be used to determine how the change in vacation timings is to be implemented in the rest of Leh.

While ONH was underway there was resistance from the teachers' lobby. Since April 1999, zonal education officers have taken action against 88 teachers on the basis of complaints filed by VECs. In some villages, VEC members take turns to provide teachers tea at times when absenteeism peaks, such as Saturday noon. The teacher has to be present when the tea arrives. LAHDC has also decided to withhold the increment of a headmaster if the school's result is lower than 50 per cent. In such cases, the headmaster can also be removed from charge and made an ordinary teacher (though the headmaster can't be technically demoted). Besides, if the results are below 50 per cent in a particular subject, the teacher in charge of that subject loses an increment. The teachers complain that a system that has rotted for 50 years cannot be reformed at one stroke. In fact, some of them also note that the improved results have much to do with teachers encouraging cheating in examinations to avoid losing their increments. But, Wangchuk points out that ONH is not about persecuting teachers. There are several schemes to honour teachers who perform well. In remote areas, where accommodation is a problem, the VEC provides furnished accommodation to the teacher. March 1 has been declared as the day to honour teachers. Since transfers are a major cause for teachers' anger, the LAHDC has divided all the schools in four categories according to the level of difficulty in the area. The teachers have to take turns to be posted in rotation to each of the four zones, though women teachers are not posted in the most difficult areas.

Up to class III, textbooks designed by SECMOL have been adopted across the district. These books rely on widely approved ways to improve instructions by making them interactive and relevant. Now, textbooks for classes IV and V are being developed by a committee that includes the council, SECMOL and a representative of J&K's education board. The target in Leh district is to cross the 70 per cent success rate in the matriculation exam by 2007. It is very likely that lango khel will soon mean only scaling a mountain pass in Ladakhi schools.