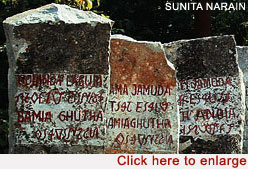 January 2, 2006. At least 13 tribal people and a policeman were killed in a clash at the Kalinganagar steel complex in Orissa's Jajpur district. The tribal people were protesting the construction of a boundary wall for a proposed mega steel plant by Tata Steel when the violence broke out

The protestors retaliated by blocking the Daitari-Paradip express highway, considered an economic lifeline because it links the mineral-rich hinterland of Jajpur and Keonjhar districts with the Paradip port. The indiscriminate killings captured national attention and raised vexed questions on industrialization, land rights and rehabilitation. But rare in recent history was the prolonged outburst of tribal protest over the killings. Their protests sparked off a similar movement in Rourkela, Orissa on January 9, 2006, where 30,000 tribal people displaced in the 1950s by the Rourkela Steel Plant are yet to be rehabilitated. 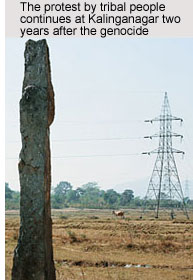 On the first commemoration of the massacre, a monument was inaugurated 13 simple stone pillars at the site where the dead were cremated. About 8,000 people, local and from elsewhere, demonstrated. Their demand tribal people be given rights over mineral resources, land, water, forests and industry in tribal areas. The

blockade of the highway went on for over 14 months before the district administration promised fulfilling some of the demands. Rabindra Jarika, secretary, Visthapan Virodhi Janmanch, the tribal organization spearheading the agitation, however, clarified that the tribal people would continue agitation against displacement. And they do. Twelve people were allegedly beaten up by security officials at the Kalinganagar industrial area on January 5, 2007, when they were demonstrating against the Jindal Steel Company for not giving local people preference in employment. Can violence keep them quiet?