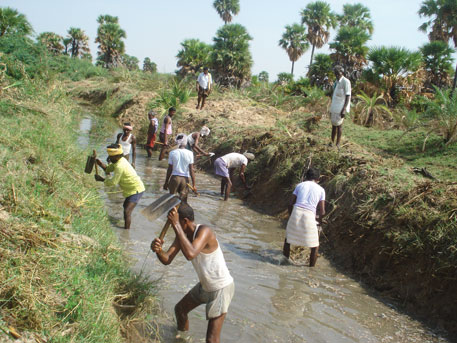 They had reached the channel even before daybreak, carrying shovels, sickles, small containers and whatever they could grab. The previous evening, their leader, the pinna pedda, had announced by beating drums the urgent need to clear the channel. On reaching the spot, the men started enthusiastically scooping out piles of silt from the channel and uprooting reeds from its sidewalls. Drenched in sweat, they returned home within a couple of hours, only to get ready for the farms.

“The channel is the lifeline of Madirepalli,” says the pinna pedda, N Adinarayana. Madirepalli, a small village in Anantapur district of Andhra Pradesh, falls in the Rayalaseemaregion which is a victim of geography and receives scanty rainfall. Its desert-like condition has prompted the Centre to cover the district under Desert Development Programme. Despite the water crisis, Madirepalli farmers grow water-intensive paddy both during kharif and rabi. “The channel provides water throughout the year, even when the drought is severe,” says ChinnaErappa, a farmer.

The channel is part of the traditional water-sharing system of Anantapur, called gonchi. According to the 2006 Minor Irrigation Census of the state government, the district has several gonchi channels that date back to 15th and 16th centuries. They were lying defunct because of silt deposition, damaged structure or reduced water flow in the Pennarriver and its streams. In recent years, as monsoon became erratic and rainfall scantier, some villages revived gonchis and tweaked them to make water available throughout the year.

A 2009 study by Anantapur-based non-profit Rural Integrated Development Society (RIDS) has identified 37 gonchi systems in 27 villages along the Pennar. “Many more communities could be preserving this irrigation system,” says K Krishtappa, president of RIDS.

In traditional gonchi system, water is diverted from the river and streams to fields through a network of channels. Now that the waterways carry water only occasionally, people have converted the diversion channels into seepage networks. They have dug large basin shaped pits, up to 4 metres deep, on the dry riverbed. Water oozes into the pit, called talipiri, and flows into the main channel that carries water till the village. Water is then diverted to fields through a network of distribution channels. The channels are dug keeping the surface slope in mind so that water flows from the talipiri to the field under gravity.

Each gonchi can irrigate from 80 hectares to 120 hectares. A village has one or more gonchisdepending on the size of the farmland. A water manager, or neeruganti, ensures that every field gets water according to its size. Flow of water is regulated by restricting the width of distribution channels or by installing sluice gates. In some villages, water is distributed on per hour basis. The neeruganti is answerable to the gonchi committee, which comprises all the farmers in the command area. The farmers also elect a leader, the pinna pedda, for managing day-to-day affairs. “Farmers elect a new leader when they feel the pinna pedda is not fit for the position due to illness or some other reasons,” says K Rami Reddy of Kesavapuram village who has been pinna pedda for 25 years. Being a leader is no easy task.

The pinna pedda has to ensure that all farmers participate in the maintenance work of the channel. If a farmer does not participate in the maintenance work or does not provide adequate labour as per the size of his landholding, he slaps a fine on the defaulter. The money collected from fines goes to the gonchi fund. Even those who use abusive words during arguments over water disputes pay fines. “The harsher the word, the higher the fine. Recently, a farmer had to pay Rs 1,000 for using abusive language,” says Adinarayana.

What happens when a farmer fails to pay fine? “He does not get water,” says Adinarayana. “But nobody dares to do so because there is no other means of getting water for irrigation,” says Reddy.

Last year, Madirepalli collected Rs 20,000 in fines and another Rs 20,000 by renting out fields to sheperds. “We plan to use the fund for hiring earth movers for desilting the channel,” says Prakash Naidu of Madirepalli. Since the introduction of the Mahatma Gandhi National Rural Employment Guarantee Act (MGNREGA), farmers have linked the programme with desilting the channels. “But MGNREGA allows removing silt from the same water body only once in three years, whereas channels require periodic maintenance,” points out Adinarayana.

While villages along the Pennar basin are trying to revive gonchis, the age-old system faces increasing threats from indiscriminate sand mining and digging of bore wells on the riverbed by outsiders. Even government projects have led to drying up of gonchis. “A couple of years ago, the government set up a bore well-based drinking water project in Illuru village to supply water to four blocks. Its gonchidried up,” says K M Rayudu of RIDS. The gonchi committee does not allow the village residents to dig bore wells close to gonchi channels, which provide drinking water to cattle and have helped revive dried up open wells. R V Rama Mohan, director Centre for World Solidarity, which conducted the study with RIDS, says,“We have found that the command area of the gonchisystem has increased due to seepage of drainage water from the Mid Pennar reservoir. Most of the functioning gonchis are located 60 km downstream of the reservoir.” In a water-starved district like Anantapur, the government should encourage every single effort to conserve water, he says.

When asked if they would abandon gonchi if the government provides water from irrigation projects, the residents of Koppalakonda village said “no” in chorus. While farmers in other parts of the country are worried about the effect of El Nino on kharif crop, farmers in villages with gonchiare sowing paddy.