It is said the future wars would be fought over the issue of water, not land. Yet Indian government promotes rice, which consumes water, over the dryland-friendly grains 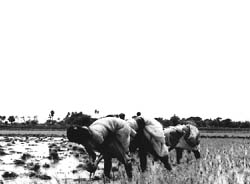 Paddy is a water intensive crops -- 15 million litres of water is required to produce one tonne of rice, according to S V Subbaiah and K G Pillai of the Directorate of Rice Research, Hyderabad. About half of the total irrigation water in Asia is used for rice production, according to L C Guerra, professor at the College of Engineering and Agro-Industrial Technology, University of the Philippines, Los Bans. While more than 90 per cent of the world's rice is produced and consumed in Asia. But water is becoming scarce by the day. Per capita availability of water resources declined by 40-60 per cent in many Asian countries between 1955 and 1990. In 2025, per capita availability of water resources in these countries is expected to decline by 15-54 per cent as compared with 1990. More than 80 per cent of the developed freshwater resources in Asia are used for irrigation. Agriculture's share of water will decline at a faster rate than previously due to increasing competition for available water from urban and industrial sectors.

Almost all the coarse cereals are better suited for the dryland agriculture and demand little water. Sorghum is suited to low and moderate rainfall. Its performs well in drought. Under favourable conditions, it grows fast, which is why it is called the camel among crops. As per Union government estimates, the coarse cereal production of 31.46 million tonnes during 1998-99 has come from 11 per cent of the area under irrigation, while the rice output of 85 million tonnes accounts for about 50 per cent of the total irrigated area. Anwar Alam, deputy director general (engineering) with the Indian Council of Agricultural Research, New Delhi, says, "Paddy and wheat, the major cereal crops in the country, consume about one-third of the total energy consumed for production of major crops in India. Irrigation, whenever applied, demands the maximum share of the energy consumed in various agricultural operations (operational energy)."

Andhra Pradesh's technology-savvy chief minister, N Chandrababu Naidu, has promised assured irrigation and power supply for agriculture. Taken in by promises, several farmers have sunk all available resources only to reap a harvest of misery, as media reports have indicated. A story in the Deccan Chronicle quoted A Lingaiah, head of the village council Mylaram in Kangal mandal of Nalgonda, explains that the paddy crop had withered away in 70 per cent of 40 hectares of in which paddy was grown.

Chief minister Naidu told a recent press conference that "his government has accorded priority to irrigation with an unprecedented budgetary allocation of Rs 4,000 crore." Political promises aside, the state's farmers are unlikely to get assured irrigation. The state government, in the cabinet meeting on October 15, 2000, requested farmers to not go for paddy during the rabi (winter) season due to low level of water in Srisailam and Nagarjunasagar reservoirs. The government is also interested in launching a campaign to deter farmers from going for paddy in the rabi season.

However, several ministers are understood to have told the chief minister that a majority of farmers were in favour of paddy in rabi , point out reports in the media. "No amount of persuasion by the agriculture and electricity departments is yielding results," a minister from Telengana region told The New Indian Express .

Will it suffice to deter farmers from growing paddy in areas where irrigation is inadequate? No, says A Seetharam, Bangalore-based project coordinator of the All India Coordinated Research Project on Millets: "The only way out is to put the traditional crops like millets and jowar at par with paddy and provide proper remuneration to the farmers. This can provide regional food security.

There is a lot of scope for these crops if we go for some value-added products."

It isn't just Andhra Pradesh and Punjab that are facing such problems. Take example of Ajmer district of Rajasthan. The government has reduced the target for sowing of rabi crops. The worst affected is wheat, which is more dependent on irrigation than others. In 1999-2000, the targeted area under wheat was 75,000 hectares (ha), and sowing took place in about 40,000 ha. The drought in 2000-2001 has forced the agriculture department to lower the area under wheat to 25,000 ha.

The area under other dryland crops like jeera (cumin) and oats is unaffected despite three years of drought -- sufficient proof to say that coarse grains are much better for sound dryland management. But the coarse grains cannot fulfil all that they promise unless the market for these crops is understood properly.