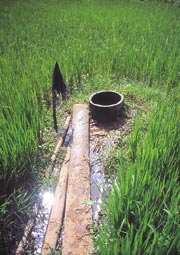 Living amidst rivers and lakes and blessed by bountiful rain, the people of Kerala are yet to realise that they face a water crisis. Droughts come, but are treated as aberrations. On the one hand water usage is shooting up, on the other rains are playing truant. Unless it gets its act together, Kerala might be in for a shock.

Even five years of declining rainfall hasn't been bad enough for meteorologists and climate scientists to start studying the problem. What is happening in Kerala today maybe an indication of what is in store for the rest of the country, perhaps even the whole of South Asia, where monsoon means more than a few rains. It is high time that planners and scientists in the state put their brains together to come up with solutions that take into account Kerala's geographical and topological peculiarities. "Even if one tenth of the water we get during the south west monsoon is preserved till summer, the problem can be solved," says CWDRM senior scientist S P Rajagopalan.

But two months after the drought, the anger and debate over the water crisis is dying as it has been raining since April. "Water scarcity will not become an issue till the next dry spell," says Achyuthan. "The people and government have to first realise and acknowledge that the problem of water scarcity in the state is real," he says. Kerala has to do that soon. Because time, like its waters, is running out.