Tribals fight for the right to write their way 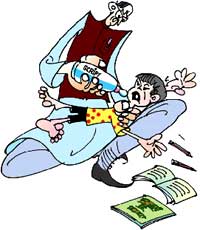 A struggle is underway in Tripura -- and it's all about a language in search of a settled script. After four decades, there is a chance the Kok-borok language could finally, and officially, use the Roman script. The controversial Tribal Language Commission has unequivocally recommended the Roman script, saying the tribal people prefer it, after a large percentage of Borok people -- 67.5 per cent -- who deposed before the commission in August 2004 demanded the Roman script be used and not Bengali. But the government is noncommittal. "We will have to see how it goes. Let's see, it will take some time," says Jitendra Chowdhry, the state's minister for tribal welfare.

The biggest casualties in the fight over the Kok-borok script are students in schools where the language is taught. As of now, each time the political dispensation changes in the autonomous council that governs education in the tribal-dominated hills, wholesale changes are ushered in.

The Left parties bat for the Bengali script, the tribal-led Indigenous Nationalist Party of Tripura favours the Roman. As a result, the primary and secondary schools of the council areas which teach Kok-borok are thrown into turmoil because the script, the textbooks and pedagogic strategies change with bewildering regularity -- in fact, 16 times in 20 years.

The situation has been received with stoicism in some quarters. "Imagine what the students go through each time there is a change of the script. I guess they have formed their own ways of learning the language regardless of the official script," says Hebol Koloi, the chairman of the Borok People's Human Rights Organisation.

Though the argument over which script should be used is couched -- at least in the public sphere -- in terms of phonetic and linguistic sophistry, the struggle is not, and some say has never been, just a cultural issue for either the numerically and economically dominant non-tribal population or for the 12 of the 19 tribes of Tripura that constitute the Borok people. Both sides invoke technical issues. "Phonetically it is justified to use the Roman script, the Bengali script makes it difficult for us to learn a lot of our sounds," says Koloi.

But S C Tripura, a senior tribal leader in the state assembly, points to a broader canvas: the tribal people's struggle against the political oppression suffered at the hands of the non-tribal majority, which, he believes, has to be played out in various arenas. He refers to the history of the state and the militant struggle that is now in progress.

The tribal people, once numerically and economically dominant, have been marginalised by the migrant Bengali-speaking people. They have been pushed inexorably into the less productive and distant hilly areas of the state. While some take up arms, says Tripura, others fight on the cultural front. The struggle against the imposition of Bengali is one of the most potent forces that bind the tribal intelligentsia. "People do not know the technical argument, they look upon Bengali as the language of neo-colonialism. For them it is a reminder that they are subjugated in their own lands to an alien culture. They have made their choice clear yet again," says Upendra Debburma of the Twipera Students' Federation.

G N Devy, a linguist renowned for his work on oral cultures, also highlights the political dimension: "Scripts have nothing to do with languages, any script can serve any language. The choice of script is a political decision not a linguistic dilemma."

The Tribal Language Commission was the most recent attempt to settle the issue. It was embroiled in controversy from its inception in June 2004 with tribal leaders protesting the cpi (m)-led state government's decision to appoint a controversial academic, Pabitra Sarkar, as its head. Kumud Kundu Choudhury, a prominent linguist, resigned in protest and people took to the streets. Sarkar is no stranger to controversy. He had recommended in 1998, in the shape of a one-man committee, that English be taught in government schools in West Bengal only from class iii (an earlier commission had outlawed it till class v), provoking a fresh round of vociferous protests.