Villagers of Bhuragaon in Assam no longer depend on the government for protecting their lands from the currents of the Brahmaputra. They have, instead, adopted a new method to save their crop and hearth by digging in spurs 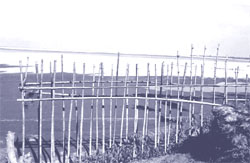 people build castles in the air and homes on firm ground. But Abdul Hussain builds his castles on the shifting sands of the Brahmaputra bank. He has been living on an earthen embankment on the banks of Brahmaputra for the last 15 years. This embankment gets shifted every year as the river engulfs more and more land into its turbulent course.

Hussain and his fellow villagers, with the help of a school teacher, realised their dreams of stopping the mighty Brahmaputra from devouring their homes by adopting a very simple method.

The embankment and drainage department (e&d) of the Assam government, commonly known as the flood control department, spends a huge sum every year in tackling floods in Assam. The damage to life and property in the state, between 1953 and 1995, is estimated at Rs 4,400 crore with a peak loss of Rs 664 crore in a single bad year. Under the temporary palliative measures (tpm), the department has been constructing earthen embankments, bamboo spurs, cribs and bamboo screen along river banks and channels to protect the people from the disasters and damage caused by floods. The spurs get washed away every year, submerging vast areas and causing damage to crop, cattle and people alike. These measures are temporary and need to be constructed every year to combat floods. There is always an inadvertent delay in release of funds and by the time the department starts construction, many villages get inundated and eroded.

According to the Bhuragaon Circle Officer, Bhasker Phukan: "Floods cause temporary problems which are always within the ambit of solutions. But the problems caused by erosion defy any easy solution. People in their individual capacities cannot do anything about it. The only remedy lies in construction of boulder spurs, an enterprise which requires massive government funding."

The people of Bhuragaon revenue circle in Morigaon district of Assam, have stopped depending on the e&d department and have set out to tackle the problem themselves. They have dug in bamboo spurs on the banks of the Brahmaputra to stave off erosion. While some people donated bamboo, others pitched in with labour to construct the bamboo spurs which were quite different from the ones constructed by the e&d department.

The man behind the so-called Improved Bamboo Spur Technology is a 56-year-old school teacher, Loyram Deka, of Sialmari village under Lahorighat revenue circle of Morigaon district. Says Deka: "Every year houses get washed away in the floods. People lose land and crop. There had to be a way out of these sufferings. One day it struck me that if we could dig in the spurs firmly in the ground by boring deep holes along the banks then may be they would be able to withstand and retard the current of the Brahmaputra."

With this idea in mind, he went to his school next day and placed his idea before his colleagues. There was a lot of scepticism among them but he won them over. Finally, with a donation of Rs 2,000 from the Tinsukia Teachers' Kendra Sabha, Loyram Deka, along with the youth of his village, set out to work. They collected bhaluka bamboo (Bambusa balooka) each of 50 feet in length. They, then, bore holes in the riverbank to a depth of 30 feet or more and inserted the bamboo staves in. The holes were hand bored by skilled labourers from the village. About 15 feet of the staves remained above ground. Two parallel rows of bamboo about two metres apart were dug in. And there was a distance of about a metre between the staves which were tied to each other with thick ropes. Sand bags, branches of trees, banana plants were dumped in the space between the parallel rows of bamboo spurs. The only expense incurred in the entire exercise was of the wages paid to the skilled borers. The rest of the work was executed through shramdaan (free labour) offered by people from different communities.

Loyram Deka and his team constructed several spurs in erosion prone areas along the bank by using this method ready to be tested in the floods that followed. The spurs seemed to have performed a miracle, as they were not only standing firm against the strong current, but also had the desired effect of minimising erosion by inducing siltation around them. The experiment was thus successful.

Observing the results of the experiment, the people of neighbouring villages also wanted to build similar spurs to protect their land from erosion. However, to build such spurs over a large area required funds. They approached the district collector (dc) of Morigaon.

In July 1999, the dc of Morigaon, A S Tiwari, ias , visited the project site. He was overwhelmed by the optimism of the people. Tiwari says: "I was impressed by the people's initiative and cooperation. People from all communities joined hands, setting aside differences, to protect themselves from the fury of nature. I wanted that people continued to participate in this manner." A meeting was organised at Bhuragaon on July 28, 1999 in which the local administration, youth clubs, students' organisations, teachers, village elders and the people participated. Three Erosion Protection Committees (epc) were constituted, namely the Bhuragaon epc, T engaguri epc and Sialamri epc, each consisting of a president, vice-president, secretary and other office-bearers and members. Thereafter, an amount of Rs 6 lakh was sanctioned to the three committees.

The Bhuragaon Circle Officer, Bhasker Phukan, who has been actively involved in motivating the people in shramdan , says: "The people of Assam have known floods for long. However, the problem of erosion is a recent phenomenon. My office records show that large-scale erosion, where several villages were washed away, started only in the late sixties." The biggest threat today is erosion. Even when there is no flood, erosion continues to take place. The main current of the river has been diverted sideways because of heavy siltation in the riverbed. The current keeps cutting into the steep banks underneath while on the surface, everything appears normal. However, within a short span of time, the entire chunk of landmass falls into the river.

Hareswar Koch, a local resident whose house was at least 15 metres away from the river bank, said: "One morning as I got up, I found that the cow shed behind my house was washed away by the river. We started to shift our belongings to a safer place, but within an hour and in front of my own eyes, my house became a part of the river Brahmaputra."

"With large scale deforestation on the hill slopes, the soil gets eroded. The Brahmaputra brings large quantity of silt every year. With siltation, the riverbed is becoming shallow. So the main current and course of the river is getting diverted. This is the chief cause of large scale erosion in the plain areas in my view," comments another resident Jalaluddin. The plight of Rohima Khatun is best told in her own words. "Floods were no problem. They used to make our soil more fertile, once they receded. Today, the main problem is of erosion. The river is now devouring our fields. The place where I sowed paddy last year is now in the river. I have lost all my fields and am now landless." The story of Abdul Hussain is that of riches to rags. His father, Late Nahsur Ali, once owned more than 20 hectares of land. It all got washed away in 1976. All that land is now part of river, and poor Abdul is a daily wage earner.

The Bhuragaon Circle records show that about 5,349 hectares of land has been eroded since 1960. The phenomenon is not confined to Bhuragaon alone. According to experts, 3.15 million hectare area all along the Brahmaputra and Barak rivers in Assam is prone to heavy floods and erosion. The reasons, however, are not far to seek. Indiscriminate felling of trees in the hills, jhum cultivation, lack of soil conservation measures, inadequate afforestation programmes have aggravated the situation. According to government estimates, Rs 1,194 crore alone is required to execute short term measures such as construction of new embankments, drainage channels, sluices and raised platforms.

While funds are nowhere in sight, the plight of the people along the Brahmaputra, continues to worsen. Even though the critics may be sceptical of the Bhuragaon spurs, and the engineers may question Deka's technology, the people's initiative to find solutions to their own problems deserves accolades from all quarters.