Lack of a coherent environmental policy is the main drawback of Hero Puch. It badly needs to shift gears to address green concerns 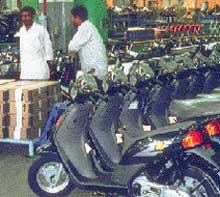 The relatively new entrant among the two-wheelers has gained popularity in the moped segment, but ranks a pathetic 25th with an overall score of 20.3 per cent. It's inept handling of the pollution aspect is evident in nearly all the parameters taken up for assessing its ecocompliance. The absence of a policy relating to environment clearly shows that this company, belonging to the Munjal Group, has yet to chart a path to tackle these issues. In a situation where environmental responsibilities are entrusted with employees from the manufacturing division and ISO 14001 certification remaining a distant dream, the company has a long way to go before it can go on the right track.

No targets have been set up for improving its resource consumption or environmental performance, paying mere lip service to the entire idea by going through the annual exercise of preparing environmental statement. Other reasons for the company's low score are absence of training programmes for its employees and lack of initiatives towards stakeholder relationship.

The company has shown little drive in consolidating customer relationship. It has hardly taken any steps to educate its customers either through its dealer network or through any written information like a newsletter or an advertisement. Its commitment to better technology is only a partial success. Though Hero Puch has indicated its plan for moving towards four-stroke technology, there is no desire to venture into alternate fuels. The fact that it is largely influenced by government decisions and totally disregards the need for a research and development facility, only indicates inertia when others are experimenting in all possible ways to consolidate their hold in the market.

Even its procurement policy and and supply chain managements are startling evidences of gross disregard for environmental concern. Outsourcing a bulk of its parts and components, the company has no formal policy or any guideline to monitor the performance of its vendors. Nor does it insist on any environmental prerequisite from its vendors. It is heartening to note that some of its vendors have started the process of iso 14001 certification but this is solely their own initiative without any contribution from the company.

At a time when most companies are showing a downward trend with regard to energy and water consumption, Hero Puch appears to have applied the reverse gear. It is yet to switch to clean gaseous fuels for meeting its energy demand and sources groundwater in entirety for its water requirements. The only shade of silver in an otherwise bleak scenario is the relatively good performance of its product -- Puch moped, which has performed well because of its low weight, good fuel efficiency, better engine design and emissions control. But again no move has been made for setting up a mechanism for product disposal.