Is the crisis spawned by this new viral infection a failure of global health governance? 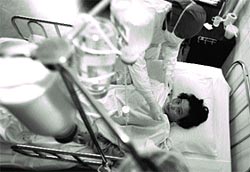 Last November, a trader in Foshan, a small industrial town in Guangdong province in China, fell seriously ill with an incurable high fever and cough. He was suspected to be suffering from pneumonia, a non-infectious disease common in the area. But then four health workers who had been treating him in the local hospital also fell critically ill. This confounded Chinese clinicians. Initially, they believed this was just another variant of the flu and countered it with traditional concoctions and high doses of antibiotics.

To be sure, the affliction resembled any pneumonia or viral infection: moderate-to-high fever accompanied by shivering, headache and body ache; after three to seven days, the formation of dry, non-productive cough. Strangely, the Chinese authorities kept the outbreak under wraps.

The panic button was pressed only after conventional treatment methods failed and more cases of the strange fever surfaced.