Survival in a chemical dustbin

Residents sleep with doors and windows shut tight. Dangerous gases are released at night in Dombivli

Survival in a chemical dustbin 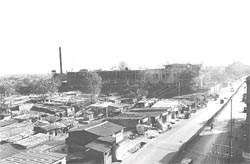 Dombivli is an industrial township in Thane district of Maharashtra. Any taxi driver can point it out to you from a distance. This small town with a big industrial estate, comprising some 50 chemicals units manufacturing dye intermediaries, is perpetually engulfed in smog. For the 100,000 residents, life is worse than hell. "The factories emit gases at night. They discharge effluents openly into the drain passing through our colony. Any complaint against them will only mean that we lose our jobs," laments Saroj Panicker, a resident of Dombivli, whose father works in a chemicals factory.

Though the Maharashtra Industrial Development Corporation (midc) is supposed to establish a common effluent treatment plant (cetp) and the industrial units have to treat their effluents, visits to at least 15 units showed that they discharge effluents in open drains. Hazardous wastes in the shape of a sludge are dumped in open fields besides residential colonies.

"When it rains the rainwater brings these chemicals in our houses," says Renuka Patil, whose house is next door to a factory manufacturing chemicals for a fertiliser plant. S P Ahire, a local physician who treats people from within the industrial area, says the most common problems are respiratory and skin disorders.

The Maharashtra Pollution Control Board says the air quality here is as poor as Chembur and central Mumbai. But pollution here is solely due to industries. "The town has become a huge dumping ground for chemicals units operating on obsolete technology," says Rashmi Mayur, director of the International Institute for Sustainable Future, Mumbai, who recently conducted a survey in the area.

In the residential areas surrounding the industrial estates, people keep their windows and doors bolted at night. There is a fear that factories may discharge poisonous gases. "Once my husband fainted suddenly after opening the windows at night," says Manisha Dubey, a resident. A senior scientific officer who does not want to be named says: "There are no official complaints from any residents. But we know for certain that some factories release gases like chlorine. As the area is densely populated this could be hazardous for human health, even fatal," But all official working in the plants only reiterated one line:" There is no pollution control board has certified this." The owner of a factory inside the estate says factories release gases at the same time, maiking it impossible for any official on inspection to identify the culprit.