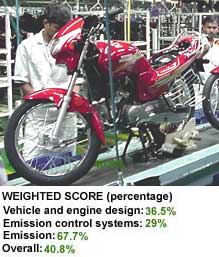 A little fine-tuning, a minor face lift -- and a leader is born. Apart from being the largest selling vehicle in the world, this second model of Hero Honda has a specific agenda and is better geared up to face the green challenges. In its Splendor version, the new product incorporates majority of the features of the cd 100, except for some cosmetic changes for better adaptability to the Indian scenario. The four-stroke bike has been rated with an overall score of 40.7, the best in the segment with a good compromise between size, performance and environment. Certain features have been incorporated in the engine design to meet the Bharat 2000 norms but still the two-wheeler has much scope for improvement. The carburettor has been modified, secondary air injection has been introduced and compression ratio changed, making it more efficient. A resonator for reducing noise has also been added, making the ride a more pleasurable experience. Hero Honda Splendor scores 36.5 per cent in vehicle and engine design to rank an enviable second among its segment in this parameter. It has a comparatively low fuel cost with second highest fuel efficiency at 77.30 km /l. The compression ratio of Splendor is better than cd 100 at nine, which tantamounts to lower maintenance cost. Some other features of the motorcycle include manual transmission, carburettor fuel supply system, dry air filter but these are more or less common to almost all the other bikes. Where it scores better than other is in emission control systems. It is one of the two four-stroke two-wheelers in India to introduce this feature and this makes for better fuel utilisation and low hc emissions.

It also makes the vehicle a better choice with a score of 29 per cent. In terms of actual emissions, the Splendor is 67.7 per cent better than the regulatory norms and ranks 4th. Its co emission is .78 gm/km, while hc and no x is .98 gm/km. The product has co2 emissions more than cd 100 which is 27 gm/km.