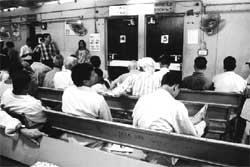 The registries would have helped formulate a control programme . But in absence of the data, the nccp has been forced to source information from other places. "We use World Health Organisation's projections," says Sudhir Gupta, chief medical officer, directorate general of health services at the mohfw. Ironically, the ncrp was supposed to generate data for the nccp. Now nccp is creating its own database to make up for ncrp's incompetence and justify its existence. It recently launched the modified district cancer control programme in four states: Bihar, Uttar Pradesh, West Bengal and Tamil Nadu. The problem is that without data, it is difficult to assess the performance of nccp.

What started off as a exercise to provide treatment is today thought of as just a trading house for radiotherapy machines. "Maximum focus was on these machines as most of the members of the advisory committee were radiologists," feels Shastri. The programme has emphasised so much on the machines that doctors opine that that most members of the medical fraternity remember the nccp only when funds are needed for equipment.

"Though there are around 280 machines in around 174 hospitals in India, there is a lack of infrastructure to cater to the growing cancer patients," accepts Gupta. The situation is pitiable that between Delhi and Lucknow, only Bareilly has a radiotherapy machine, says Agarwal. Realising its failure to treat cancer, the focus has now shifted to cancer prevention through awareness.


As most patients in India are diagnosed only at the late stages, curing the disease becomes difficult, feel most experts And this increases the mortality rate. This is largely to do with lack of awareness. According to the Centers for Disease Control and Prevention, usa, surveillance is an effective way of identifying disease-prone areas. For example, in the case of breast cancer, a tmc study showed that if the woman is diagnosed at stage i, the survival rate is around 97.3 per cent. But if the case is diagnosed in stage iv, the survival rate is only 37.6 per cent.

In Barsi, Maharashtra, for example, increased awareness resulted in more cervical cancers being identified in early stages and resulting in increased survival rates -- 32.6 per cent in 1987-1988 to 48 per cent in 1991. "Such success stories are rarely heard as government programmes are few. ngos do their best but the government does not help them," says Piyush Gupta, principal executive officer, Cancer Aid Society, an ngo working towards increasing awareness in different parts of the country. Early detection is possible only if information about trends is available, which would help in identifying the susceptible populations.

It is not easy to identify the reasons for the increase in the number of cancer cases, says Gangadharan. A comprehensive registry programme can give direction to cancer research. Since research is expensive, it becomes imperative that it is focused on specific problems -- like finding cheap ways of diagnosis. For example, the department of preventive oncology at tmc is using a solution of vinegar and a hand-held lens to identify cancer of the cervix. This proves much cheaper compared to the conventional pap smear test, says Shastri. Developing cheap indigenous drugs is another priority, feels Goel. The most effective combinations of treatment can also be validated through research. Experts feel that predictive tests, based on cancer data, can be used to assess risk of cancers that are hereditary. In the absence of country specific data, western models are being used to predict the risk. Western data, however, cannot be used in Indian context as cancer behaves differently in two different environments, says Agarwal.

icmr, which is supposed to monitor the research being carried out in the country, has provided monetary assistance to 284 projects on cancer so far. The majority of projects focus on what happens after the disease has occurred.

Very few projects question why the cancer is occurring. And that too vaguely. To find the cause researchers would have to explore the environment and lifestyle links from food to air pollutants of why the cancers are happening. Focus is on the known risks such as effect of tobacco on incidence of oral cancer. Only a couple of projects tried to investigate the effect of environmental factors on the incidence of cancer, those too were abandoned midway. One of these projects, was attempting to assess the linkages of cancer with tobacco, adulterants in food and pollution. " icmr projects are perfunctory and just basic research," says Agarwal.


"Improvement in cancer treatment and control can be achieved only if the registry data is used extensively by the doctors and the administrators, says Gangadharan. One way of doing this would be to increase the centres where the registries are operating. "All existing 17 rcc should start a cancer registry," says Varghese. While this would provide information about the urban areas, the rcc should also identify a rural area in their state so that comparative data is available, he suggests. Gangadharan laments that the expected increase in the registry activities has not taken place. Institutions like medical colleges do not recognise the need for data collection. The cancer profile of the country can be appreciated only if variation in lifestyle and socio-cultural background in the country is taken into account, he says.

"It is important that cancer becomes a notifiable disease," says Desai. A regional seminar on cancer control held way back in 1986 in Chennai had also suggested that data collection would be more effective if the doctors themselves reported the cases that come to them. The Union health minister disagrees. Notifiable diseases are usually contagious ones and it would create unnecessary paperwork if cancer were included in this group, he says. Instead, strengthening the morbidity and mortality data collection system would be sufficient, says Thakur. But the functioning of the present system does not give much hope. A lack of will seems to be the reason behind the inability of the registry to function productively. "Collection of data by the registry should be carried in the same way a business organisation carries out its market research where information collected is used to decide on the strategies," says Shastri. The country has miserably failed to do so.

"We know that tobacco related cancers are on the rise which indicates that we need to ban tobacco," says B B Yeole, deputy director, Mumbai cancer registry. But Shastri points out lacunae even in the bans put in place: "While toothpastes containing tobacco have been banned, they are still easily available in the market," says Shastri. While Thakur assures that smoking would be banned, he expresses his inability to do anything about chewed tobacco. It is just too bad that cancers related to chewed tobacco are more common in the country.

What is needed is a political will to address a problem that has been ignored for long. Comprehensive, up to date epidemiological data. A control programme that identifies susceptible populations and devices strategies to check the spread of the killer. And most importantly, an acceptance of the fact that cancer is a killer and is here to stay. But given the malignant ways of the medicine mandarins, there is little that one can expect of them. Just more cases of Gauri Prasad. And the oft repeated admission: "We don't know".