The African legacy of animal care

The African legacy of animal care 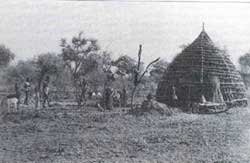 From the Ivory Coast to the dusty expanses of the Sahara, time honoured techniques are still followed to heal sick animals. A sick cow need not be taken to a hospital: a barefoot vet can disinfect the affected areas with urine, administer medicines from the local Materia Medica and even conduct a surgery.His simultaneous exhortations to the gods can soothe both the owner and the animal.

"Ethnoveterinary medicine" -- nuggets of tried and tested medical knowledge preserved in local lore -- is cheap, effective and accessible to the concerned communities. In an extensive study in Africa by Constance M McCorkle and Evelyn Mathias Mundy of the Center for Indigenous Knowledge and Rural Development at the Iowa State University found that Western medicine systems are expensive and not always related to local needs and conditions. They found that community medicine men can be used to sustain livestock development without harming biodiversity.

African pastoralists like the nomadic Masai of Kenya and the Fulani of Mauritania have evolved indigenous systems of veterinary treatment that are often more effective than the Western system. Animal care among these people hinges on several factors like the economic value and status of the animal and the special relationship it shares with its owner. The diagnoses are arrived at by prevailing belief systems that rely heavily on symptoms, post mortems and epidemiological observations.

These communities have a virtual armoury of ethnobotanical antidotes to livestock diseases -- tobacco to cure ecto- and endo-parasites, urine to disinfect and garlic as the handy multi-purpose botanical. The list is endless. African pastoralists are also familiar with toxicology, knowing very well that certain precise quantities of plant poisons can heal. The Fulanis of north Africa, for instance, know that the diarrhoea-causing Balanites aegyptia is effective against livestock snakebites.

The knowledge of vaccinations against infectious diseases like rinderpest and bovine pleuro-pneumonia still lives on among the Fulanis, the Masai and Somalis. Vaccines against rinderpest are prepared from the lung tissue, urine, faeces or milk of infected animals. For the foot-and-mouth disease, vaccines are prepared from the feet, tongue or udder.

McCorkle and Mundy feel that vaccination is one area where non-Western veterinary savvy can be effectively blended with the Western system. A conventional programme to eradicate rinderpest failed in the '60s due to lack of funds, trained humanpower and poor transport. Indigenous immunisation was effective but difficult to apply quickly when an epidemic struck. To find a way out of hiatus, a new rinderpest vaccine was developed using state-of-the-art recombinant gene technology. The technology enabled herdowners to inoculate a single calf and then produce all the vaccine they required by using traditional methods.

Bloodletting, an ancient technique first used in Egypt, is widely used by African pastoralists. The Tuaregs and the Somalis burn certain patterns on the skin of diseased animals to increase blood circulation in the affected area and kill infectious organisms. The Masai and the Fulanis believe that bleeding drains away sickness by expelling "bad", "black" or "dead" blood. The bloodletting follows different techniques -- puncturing the jugular vein, piercing a blood vessel over the eye or slitting or cutting the tail or ears.

The pastoralists normally castrate their livestock during the dry season, when chances of infection and mortality are at a minimum. Both surgery and bloodless methods are used. Normally, large animals are surgically castrated and the seminal cords are removed. Some among the Somalis castrate their small ruminants by crushing the spermatic cord or by applying a red hot needle to the testicles. Floral and faunal preparations are used to cleanse, disinfect and pack the wounds.

The pastoralist Dinka of south Sudan dress wounds with urine and cattle dung -- both of which have sterilising qualities. The Dinka and the Tuareg sew up wounds with giraffe, cattle, horse or donkey hair. The Masai cauterise lesions, remove injured eyes and close intestinal and stomach wounds with fine tendons.

The traditional African herding methods hinge more on disease protection based on an ecological approach, in marked contrast to the Western emphasis on eradication. People like the Fulani, the Tuareg and the Somali travel extensively in search of food and water for their herds. Their itineraries are, therefore, often designed to consciously avoid grazing grounds and watering sites that might cause sickness.

Another strategy is to graze or water the herd during those periods -- day, night or time of year -- when pests are the least abundant. A common practice in the fly season is to graze animals at night when the insects are less active. Sometimes, animals are taken out to graze only after the morning dew has dried, to prevent them from ingesting the larvae of harmful species that retreat below the soil level only with the sun's advent.

The link between insects and disease has been thoroughly examined by African herdsmen. The Fulani correctly link trypanosomiasis with tsetse fly bites. Long before the "White Man" invaded their continent, African herders were aware that ticks vector diseases like redwater in cattle and heartwater in sheep. Many pastoral groups of Africa have long known that wind, or "odours", carry the virus that cause the foot and mouth disease. The Fulani move infected herds upwind to avoid contagion, or downwind, fully aware that mild exposure confers immunity. To limit contagion, the Dinka, the Masai and the Nuer, an ethnic group from Sudan, quietly place their cattle in other people's herds to ensure that even if an epidemic does break out, at least some of their livestock will survive.


Pests and parasites are controlled through a wide range of methods. Smudge fires are lit to drive off insects; animals are driven through rivers to loosen ticks and wash away dirt and dung that attract flies. The communities also rely on certain species of wild and domestic birds who prey on disease-carrying insects and parasites.

Several home remedies -- from mud ash to fruits and flowers -- are used to cure diseases ranging from ringworm to ticks and lice. Healthy animals are less prone to disease, so to keep his stock in fine fettle, a stockowner often feeds his animals with edible earth tonics and special feeds. The Somali feed their stud camels with ghee and sesame oil to increase their virility. The Fulani give their cattle a traditional mineral supplement by placing limestone potash on top of an old termite mound. Stockraisers also have a working knowledge of genetics, which has led to a number of stress, drought and disease-tolerant breeds.

But ethnomedicine has its limitations. The collection, preparation and administration of traditional medicine can be inconvenient and time consuming. There are many herdowners who, on the other hand, consider the extra travel and expense involved in collecting Western drugs of dubious quality from unscrupulous dealers no less bothersome. It is also recognised that ethnopharmacy is less effective than modern antibiotics in treating many bacterial infections. While quarantine and herd dispersal can be helpful, these practices cannot completely halt epidemics.

Traditional healers and herdsmen agree that ethnodiagnosis is tricky business since different infectious diseases can carry similar clinical symptoms. But anyone who has made several frustrating return trips to doctors for a correct diagnosis can testify that Western medicine has certain limitations too. Most traditional practices are based on common sense and long observation. A pragmatic blending of local knowhow with Western methods might provide the appropriate medical technology, friendly to animals and ecologically sound.