The Baigas and their weavers

The buzzword these days in Baigachak is the Baiga Mahapanchayat. It is an effort of Nai Disha, a non-governmental organisation (NGO) in Sijhora town of Mandla district, and Ekta Parishad, a large network of grassroots NGOs in central India. The organisations are lending support to Baiga culture, helping the tribals document their history, assert their rights and cope with the world 'outside'

The Baigas and their weavers 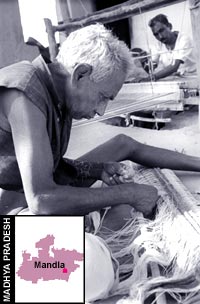 The Baiga is one of the aboriginal tribes of India. Its home is Baigachak, the territory -- east of the plateau of Maikal Hills in southeastern Mandla, stretching into Chhattisgarh's Bilaspur district -- demarcated for the tribe during the British Raj.

The buzzword these days in the region is the Baiga Mahapanchayat. It is an effort of Nai Disha, a non-governmental organisation (ngo) in Sijhora town of Mandla district, and Ekta Parishad, a large network of grassroots ngos in central India. The organisations are lending support to Baiga culture, helping the tribals document their history, assert their rights and cope with the world 'outside'. But Naresh Biswas of Nai Disha worries: it is impossible to mobilise a sustained effort without providing economic support. Doling out charity would undermine the Baiga culture. So Nai Disha is working on a market for the tribals. And it is in the course of this effort that Nai Disha gave serious thought to the fact that the Baiga don't weave. The weavers live in villages neighbouring the forest, like Ramtila in Bichchiya block of Mandla district.
There are 60 families of the panka caste of traditional weavers in Ramtila village. They weaved fabric for the Baiga -- the tribals wear only thick cloth (verging on coarse) that doesn't rip as they course through the forest's undergrowth. In the early 1990s, Ramtila lost its market to a trader from Bilaspur, the other end of Baigachak.

"The white thread we used was unbleached, and the red dye would fade," says Asa Das, a resident of Ramtila. "A trader from Bilaspur took our products to the usta weavers in Bilaspur. He started bleaching the thread and got dyes that don't fade. He brought his products to the village fairs, and before we knew it, our market was lost." In 1992, state government officials created a cooperative society to market clothes weaved in Ramtila. Asa Das was the office bearer, and he reluctantly admits that he embezzled funds. The handlooms fell to disuse and the weavers started relying extensively on rainfed agriculture. The trader, now assured of his clientele, increased his prices.

Having worked among the Baiga, Nai Disha saw an opportunity to revive the economic relations that the tribals had with villages neighbouring their forests. It began mobilising Ramtila's women. "The government's attempt to create a cooperative failed because it didn't involve the entire village. These days, the mantra is women's self-help groups (shg). That's the approach we adopted," says Biswas.

Nai Disha provided thread on loan to the shg, and bought the finished products. The thread was bleached, the dyes permanent. Devi Bai, office bearer of the shg (and one of the most vocal women in the village), points out that the group takes a commission of Rs 10 on every saree worth Rs 50. This amount goes into the group's savings account. Today, the shg provides thread to the weavers and pays them for their labour. Nai Disha takes the finished products and transports them to markets -- like the fair price shop in Dadar Tola, where the Baiga get to buy their traditional dresses at rates lower than in the market. Devi Bai says the effort worked because the women's group was in charge. Biswas has asked her to deduct Rs 2 from the wages if the fabric woven is not good.

The revival of weaving has provided additional income that comes handy in times of drought. Asa Das says few people have left despite monsoon failure and poor crop.

But the weavers can weave much more than the Baiga can buy. Biswas plans to take these weaves to cities to cash in on the market for ethnic items. His problem, though, is that all this takes Nai Disha away from its main purpose: mobilising the Baiga to realise their rights and demand them. "These activities began as ways to engage people through economic measures. But the marketing can't, shouldn't, take over the movement," he says. The dilemma is in no way a new one: are the means more important than the end?

Nai Disha plans to withdraw from these efforts and hand them over to the communities. It is also a question of financial viability -- the organisation can't support these activities forever.

The problem in any such intervention -- and most grassroots organisations know it -- is that the moment financial and organisational support ends, the effort falls through under the weight of market forces and local traders. Old-timers and veterans of many social campaigns point out that, typically, social organisations don't get along with traders, who are an inherent part of the local economy. Will the economic by-products of Nai Disha's campaign stand the test of time?