Punjab, which accounts for only 1.5 per cent of the total geographical area of the country, cannot continue producing for the whole country. It is time to look for an alternative 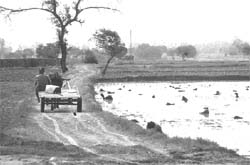 A few months, India was besieged by a drought. But the drought did not lead to a famine. A comfortable grain reserve of 26 million tonnes -11 million tonnes more than would be required in a normal year to stave of the famine. But this may be the last time India can ride over a crisis of this proportion. Future droughts may well lead to famine, for frontline agricultural states such as Punjab is on the edge of a grave environmental crisis, say experts.

But with the problems in Punjab surfacing, solutions have also come by. From the demand for a thorough agriculture policy catering to the local requirements to doing away with 'mindless' subsidies, experts have been crying hoarse their suggestions to keep away from the imminent doom. To stick with the status quo will invite environmental and social disaster.

REPLICATING GR: Experts contend that there is an enormous potential for propagating sustainable agriculture in India. "Increasing population and declining production will not be a grave problem if we extend cultivation outside Haryana and Punjab," says Sen. He, however, feels that replicating gr in its entirety is not the answer. "Instead, we need to improve our marketing facilities, road connection, bring the Gangetic plains into the scope of cultivation; popularise region-specific varieties; give irrigation support; and, stop monoculture. Private agencies can also be used in marketing but the state should work as a police to see nothing goes wrong," says Sen.

Says Swaminathan: "Punjab and Haryana alone cannot feed our country. We must make every part of our country self-sufficient so that diversification of farming will be possible. Assam is now on the road to self-sufficiency in rice. The remarkable progress being made by Assam in rice production is triggered by shallow tubewells. We need a million shallow tubewells in Assam to enable the state to make the flood-free season into a major cropping season. Similar strategies will have to be developed on an eco-regional basis."

In the coming years we have no option except to produce more from less per capita arable land and irrigation water, says Swaminathan. "gr is another name for productivity improvement-based production increase. What we require today is an evergreen revolution rooted in the principles of ecology, economics, gender, equity and employment generation," he adds. The problem is the right people are not in the right places and such an extension needs political will that is obviously lacking in this country, feels Sharma.

AGRICULTURAL POLICY: There should not be one policy for the whole country but different policies based on the ecological needs and situation of the area, say experts. "Policies should be different for different states depending on their stage of development.I do not consider it appropriate for all states to follow a standard guideline for agriculture developed by policy makers in New Delhi," says Gurdev S Khush. "In Punjab, for instance, pulses, which are nitrogen fixers, should be given importance and the government should provide higher prices for pulses," says Sharma.

Where subsidies are concerned, the pricing policies for fertilisers, water and power should have a long-term sustainability dimension. "It should not be based on immediate socio-economic, technological and political concerns," says S K Sinha, former national professor, Indian Agricultural Research Institute, New Delhi. For instance, even though in the short-term, potash application may not show good response, pricing policy should be such that the farmers are encouraged to apply this to ensure continued good soil health.

Similarly, water pricing policy should be changed to ensure that water excess of recharge capacity is not pumped out. Policies like free power that encourage tapping of groundwater should also be done away with, says Swaminathan.

One of the main drawbacks is the failure to provide adequate incentive to other crops. The minimum support price of wheat, for instance, is currently Rs 580 per quintal, which is much higher than the world prices. Other crops do not enjoy the same status. "Rice-wheat cultivation has become an opium. Because it is lucrative, people do not want to produce any other crop," says Sen. To undo the damage done in the last 30 years, India needs to do two things - reduce the area under rice cultivation and encourage production of leguminous crops, for which the government can start a subsidy system. "Pricing power will also make people break from the water-intensive rice-wheat cropping pattern," he adds.

AGRICULTURAL RESEARCH: "Research is around 10 years behind in India. Today research is designed on the funding it gets. There is no understanding of field problems and this gap is a big setback," Sharma says. What is required then is a paradigm shift from commodity-centred to ecologically-sustainable farming systems, says Indian Council of Agricultural Research director general R S Paroda. For this, scientists will have to generate and implement new technologies. Technologies like biotechnology, meteorology and microelectronics are "powerful tools to meet the emerging challenges, but they need to be used with great scientific care and discretion", says Paroda.

Sinha had suggested that more research is needed to develop rice and wheat varieties, which have a higher yield potential, for areas in the country where the yield is less. "Efforts should be made for effective use of appropriate germplasm or parent materials so that good varieties with higher yield and disease resistance are available to meet the local demands," says Sinha.

UNDOING THE DAMAGE: Meanwhile, only community mobilisation, education and regulation can repair the damage that has taken place. "We have not an opportunity to implement Schedule 11 of the Constitution Amendment 1973, which entrusts responsibilities for natural resource conservation to panchayats," says Swaminathan. For instance, farmers can be taught about the benefits of organic farming along with integrated soil healthcare systems involving the use of green manure, biofertilisers, composting and the minimum essential mineral fertilisers. "The majority of our farmers have holdings of 1 ha or less. They often do not own cattle, therefore, organic manure alone will not be adequate to meet the needs of our hungry soils," says Swaminathan.

With inputs from Raj Kishore Khaware in Ludhiana and Indira Khurana