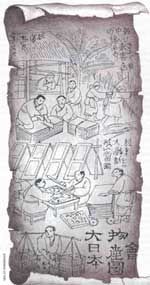 THIS is possible only in Japan, perhaps. Some sage wrote scriptures on a piece of paper in 1247. And 487 years later, the same paper was used by a scholar for taking down notes. If you don't believe this, see it for yourself in the Paper Museum in Tokyo.

Japan is the world's second largest producer and consumer of paper. But according to the Japan Paper Association, almost half of all the paper produced every year is recycled, making Japan one of the world's best paper recyclers. And yet, today's Japanese are not a patch on their ancestors.

In the days of yore, the Japanese wouldn't waste even a scrap of paper. According to Hidetoshi Komiya, head curator at the Paper Museum, "They would dry it after wiping their nose to use it again and again." The museum exhibits also testify to the paper recycling ethos of the ancient Japanese. Komiya mentions the Kamisuki chohoki, the famous book on paper manufacture, published in 1756, in which there is a drawing of a man who climbs down a valley only to retrieve a sheet of paper that had been blown away.
The factors that made this amazing recycling tradition possible were the paucity and the high price of good paper in those days, as well as the material which the Japanese used for making the paper. The texture of washi, the traditional Japanese paper, lent itself to repeated use. Strong and flexible, it resembled cloth more than modern paper, and could be easily used repeated. In fact, there are instances of washi being used to make kimonos which the women actually wore. In fact, legend has it that if a merchant's house caught fire, the patriarch would immediately throw his accounts book into the well. The washi ensured that the book remained quite intact, while thanks to sumi, a traditional ink from China, the text still remained quite legible, despite the drubbing.

Washi owes its strength to the longer fibres of which it is made. In contemporary Western paper made from wood pulp, the fibres are only a few millimetres in length. The washi fibres, taken from a variety of plants, including paper mulberry, Wikstroemia sikokiana and Edgweworthia papyrifera, are as much as 10 mm long. They are entwined closely, so that the paper has mechanical strength. This is in contrast to modern paper, whose strength depends on its chemical treatment.

In ancient Japan, the utility of paper was as important as its beauty. Japanese paper is still known for its delicate texture -- one can read through it -- despite its strength.

Paper came to Japan from China, where Ts'ai Lun, an official of the Han dynasty, first reported its manufacture in 105 AD. Paper making was introduced to Japan by an itinerant Korean monk in 610 AD. Westerners had to wait for another century before they learnt the art. By the 14th century paper mills mushroomed in Europe, and by the 19th century, wood pulp began to replace rags as the principle source of fibre.

Within a few centuries of the introduction of paper to their country, however, the Japanese had modified the Chinese technique. Paper is generally made by collecting an emulsion of specially treated fibres in water, which is then made to drip through a screen. The Japanese improved upon this by not only scooping out the fibres with a screen, but also moving the frame in a manner that allowed the fibres to get suitably entwined. They also began to add a sticky extract from plants that made the delicate handling of the fibres easier. The Imperial Court of the Heian period (794-1192 AD), known for its penchant for style and elegance, favoured Japanese paper over the Chinese type. Lady Murasaki in her tome, Genji Monotagari, (11th century AD), wrote that Prince Hikaru Genji ordered the court craftsmen to switch over to Japanese paper, which he found to be far superior. In those days, the nobles of the court could choose from a wide variety of Japanese paper, some of which were literally worth their weight in gold. Washi has ever since remained one of the most popular gifts of the Japanese, though, as Komiya admits, "Master calligraphers still prefer using Chinese paper because of the subtle blur which it gives to their art."


The Japanese began recycling paper almost as soon as they began making it. In the Heian period, recycled paper was called usuzugami, meaning paper of light sumi colour. The greyish colour was in fact because of the poor bleaching technique used. But the Japanese then felt that the colour was appropriate for expressing their feelings for the dead. Paper began to be recycled for the repose of the soul. A lady in the court of Emperor Seiwa (850-880 AD) had the letters she had received from the emperor recycled after his death, to write a sutra on it. Recycled paper was also called shokoshi and kankonshi, or paper on which the soul of the deceased would dwell.

However, paper remained the preserve of the nobility till the Edo period in 1603, when the commoners could finally lay their hands on the prized commodity. The ruling Tokugawa clan closed the country to the outside world for 2 centuries. But inside, the rulers promoted trade and commerce and business thrived, thanks to the emerging middle class. The paper industry boomed. By the 18th century, when Edo had a population of a million, paper was everywhere. There were paper handkerchiefs, wrapping papers and books galore.

But, paper was still not so easy to come by and people could ill-afford to waste it. Soon a paper-recycling industry sprang up. Collecting used paper became an occupation. Some areas of major cities came to be known as production centres of recycled paper. Asakusa in Edo was one of these. Asakusa paper was known as being very poor in quality. Very often, the paper would have bugs, strands of hair, or other objects trapped in the fibres. But this low quality paper proved immensely popular, for it came in handy for everyday use, whether for blowing one's nose or writing a letter. Recycled paper was also used to make book covers, and sometimes, entire books were made of it. Some of these books, exhibited in the Museum, can still be read today.

Traditional Japanese paper finally gave way to Western paper in the late 19th century, when the country began its mass production. It's manufacture has not been able to keep up with the voracious paper hunger of the Japanese in their highly industrialised economy. Says Komiya, "Now the output of Japanese (traditional) paper is so small, it isn't even taken into account in industrial statistics." But it still retains its popularity for its aesthetic appeal, and for paper and diaries that will perhaps last for a thousand years.

Written by Meera Iyer, based on the article "Soul Paper", by Kayoko Chiba in Japan EcoTimes, March 1995, and Indian Science and Technology in the Eighteenth Century, by Dharampal.