Participation of Scheduled Castes, Scheduled Tribes in the scheme has halved in five years 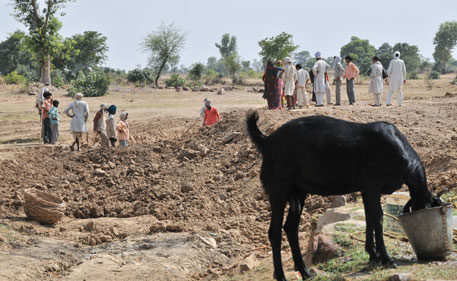 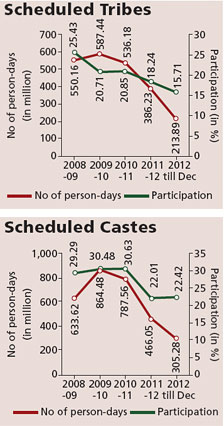 The Centre’s flagship rural employment guarantee scheme seems to be losing appeal for its target groups. An analysis of the monitoring report of the Mahatma Gandhi National Rural Employment Guarantee Act (MGNREGA) by Down To Earth (DTE) shows participation of the Scheduled Castes and Scheduled Tribes in the scheme has more than halved in last five years.

The scheme, hyped as one of the key development interventions of the government, guarantees 100 days of manual employment a year to a rural household that demands work. Since its inception, its hallmark has been the wide participation of casual workers belonging to SC/ST communities.

In 2008-09, about 55 per cent of those employed under MGNREGA were SC/ST. But over the period their percentage of participation in the scheme as well as the number of days for which they are provided employment has decreased. The decline was steep in last two years (see graphs).

Officials in charge of the scheme both at the centre and states are unable to explain the trend. D k jain, in-charge of MGNREGA at the ministry of rural development, says, “it’s a new and surprising trend for us. It would be prudent to comment after doing an in-depth study of the trend.” Ravindra pastor, commissioner in-charge of MGNREGA in madhya pradesh, considers the trend as a sign of development.

“under MGNREGA, people have created a large number of assets, especially dug wells. This has improved irrigation and encouraged them to work in their fields rather than working in the scheme,” pastor adds. Madhya pradesh has witnessed the steepest decline in st participation. Their person-days of labour has shrunk from 138 million to 21 million between 2008-09 and 2012.

Karnataka and Chhattisgarh are two other states where the participation of STs in the scheme has declined significantly. When contacted, commissioner in-charge of MGNREGA in the states denied the trend.

DTE spoke to several analysts of the MGNREGA programme. Though unable to specify the reason, most of them blamed the decline on the delay in wage payment. Another reason is, says Abhay Kumar Pandey, director of Social Audit department, the scheme has given people the bargaining power to get jobs elsewhere. The department was created last year to audit MGNREGA.

Nikhil Dey of Mazdoor Kishan Shakti Sangthan of Rajasthan says the overall demand for work under MGNREGA is declining. He blames it on delay in payments and corruption. Bastar-based activist Shashikant says the declining trend could be because most people in the hinterlands are not aware that it is their right to demand work under MGNREGA.

Andhra Pradesh that has witnessed moderate increase in SC/ST participation, however, indicates the probable reason. V Karuna, director of MGNREGA, says, “We are trying to transform this supply-driven scheme into a demand-driven one. We manage everything, from jobs’ application to transaction of money to beneficiaries, electronically. This has brought transparency into the system.” This has instilled confidence in the poorest that MGNREGA offers assured work.

DTE’s analysis result does not augur well for the ruling United Progressive Alliance (UPA) at the Centre as it gears up for the 2014 general elections. MGNREGA is believed to be the main reason for UPA’s return to power in the 2009 general elections.