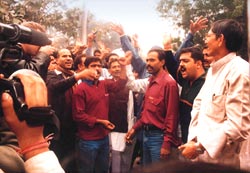 FOR many years now, small-scale industries have been making ugly rounds of courts. From Delhi to Kolkata, Agra to Vellore, the story repeats itself. Rather with more ferocity. Acting on public interest litigations and frustrated at the government's lackadaisical attitude, the courts are cracking the whip on the industries. So much so that in 1996, the Supreme Court (SC) gave as many as 12 verdicts in pollution-related cases. In Delhi, exasperated over the delay in implementation of its 1996 decision, the SC cracked down on officials in November 2000. The court had said that no polluting industry must be allowed to operate from Delhi's residential areas. Forced to act, the Delhi government shut down over 2,000 small-scale industries. In the ensuing protests by workers, three people lost their lives and the capital virtually came to a standstill for several days. In a similar verdict, again in 1996, the apex court ordered the state government to relocate the highly polluting tanneries outside Kolkata. And this is not the end. In 2002, the Madras High Court ordered the 325-odd tanneries in Vellore district to pay a compensation of Rs 26.82 crore to restore the ecology of Vellore district and to the affected people. The tanneries were discharging effluents to the tune of more than 10 million litres per day (mld) for over 20 years. Whether it is Delhi, Kolkata or Chennai, the country is paying for its environmentally mindless policy (see table: Pollution flashpoints). "SSIs lack the technical expertise or finance to invest in the pollution control technologies," says Utpal Bajpai, head, Technology Bureau of Small Enterprises (TBSE), Mumbai. According to a status report on SSIs by the Central Pollution Control Board: "The level of pollution caused by the SSI sector in India per unit of output is higher than their counterparts in developed countries." The reasons are many:

• Continued usage of outdated and inefficient technologies that generate large amounts of wastes;

• Lack of resources for enforcement and implementation of pollution control programmes;

• Lack of public/market pressure for improving environmental performance; and,


The task of cleaning the SSIs seems next to impossible. In Delhi, the closed SSIs have now started operating with the momentum of relocation getting lost in a bureaucratic maze. Similarly in Kolkata, after six years of the apex court order, officials confirm that tanneries still operate clandestinely in the absence of any infrastructure to relocate. In both these cases, as in any other part of the country, the problem of tackling the SSI comes from lack of the required strong political will and the ineffectiveness of our regulatory bodies like the state pollution control boards.

Sounding pessimistic, a senior official in the Union ministry of environment and forests, admits: "The number of SSIs is too large to be regulated." S Janakarajan, associate professor, Madras Institute of Development Studies, Chennai says, "Pollution control board officials cannot do much as these industries lie scattered."

Today, there is no appropriate regulatory structure for SSI units. "It is a massive task to regulate this sector. We are looking at a total of more than five million units spread across the country," says P K Gupta, director, National Cleaner Production Centre, New Delhi. A Planning Commission's study has found that the existing system is grossly inadequate to monitor the polluting industries.

"In Andhra Pradesh, one technical person has to monitor hundred units," the report states. "It's almost impossible for state pollution control officials to monitor and regulate the registered SSIs. The unregistered ones escape regulation," says A K Mhaskar, a former Maharashtra pollution control board official. In order to prosecute an unregistered unit for pollution, the official machinery would first have to first recognise its existence and then take steps to regularise it. "Authorities may have some success in regulating the registered SSIs which are located in the designated industrial areas, but the problem comes from more than two million unregistered units operating from residential localities in urban areas," says A S Sood, deputy director, development commissioner for SSIs.

Sood knows it better. He had conducted an all-India survey of small-scale asbestos units and found that more than 90 per cent units did not have any sort of pollution abatement equipment.

The lack of regulation clearly stands out in the findings of a Study of the State Pollution Control Boards undertaken by the Programme Evaluation Organisation at the instance of the Planning Commission. "The number of highly polluting units inventorised by the SPCBs as a per cent of the number estimated from the annual survey of industries is very low in a majority of states. Again, it is found that the levels of inventorisation of hazardous waste generating units is less than complete in the states of Andhra Pradesh, Kerala, Tamil Nadu, Bihar and West Bengal and that when the inventorised units are taken, the percentage of units operating with licenses is not satisfactory in a few states."