Read between the lines: the Supreme Court order has a development model hidden for the Northeast 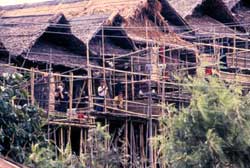 THE ban comes at a time when the region's economy is in an inertia and is desperate for an economic miracle. The post-ban realisation of the economic potential of forests and the apex court's instruction to measure the sustainability of forests comes as a reminder of the development model that the region needs to adopt.

In search of economic prosperity, the region has landed up in a deadly financial mess from where it doesn't have money to run even for a few weeks. Heavily dependent on the Union government's doles as special status, its sustainability has come down to such a level that even for basic commodities like cereals, pulses, meat and eggs, it spends Rs 1,000 crore per year in imports. While its per capita plan outlay is highest in India, in development monitor, it ranks below Bihar.

For a remote region with fragile ecology and poorly developed infrastructure, there is limited scope for promoting a sustainable, yet modern economy. The most viable option is from the rich biodiversity, which the region is abundantly blessed with.

Forests are a major source of livelihood for the indigenous population of Northeast. Over the years, communities have managed to incorporate their traditions into effective forest management systems. For instance, in the United Khasi Jaintia Hills Autonomous District (Management and Control of Forest) Act, 1958, in Meghalaya, forests are protected by a unique system. Forests are divided into nine categories, where land is preserved for sacred groves, watershed and so on. Similarly, in Mizoram, village councils efficiently manage more than 40 per cent of the forests. To safeguard these social and cultural institutions and traditional rights over land and forest, states have been conferred with special powers under the Constitution - they can enact laws for land and forests.

Despite their enormous potential to generate wealth, governments have undermined and neglected these land management systems, leading to stagnation in the rural economy. This was clearly pointed out by the S P Shukla Committee, formed by the Union government, to evolve strategies for developing the economy of the region. The Committee is the region's most comprehensive development planning exercise ever done. "Traditional institutions have been carelessly bypassed for newer structures that are perhaps not always suited to the region," said the report.


Many plans and recommendation have been mooted to the economy of the region. But none have taken off. One reason is that some proposed development models do not suit the region. As the Shukla committee report pointed out in Transforming the Northeast: "All-India norms and patterns of administration and planning have been extended to or have sometimes been sought by these units only to prove an embarrassment." It further suggested the need for change in basic planning pattern from 'planning for the Northeast' to 'planning with the Northeast'.

Planning with Northeast means planning the economic use of the natural resources. For instance, bamboo, aptly termed the 'green gold', is abundantly found in the Northeast from which high value products can be developed. Out of the estimated 13.47 million tonnes (MT) of bamboo supply in the country, the Northeast region alone contributes to 8.11 MT. Bamboo in its raw form is estimated to generate an amount of Rs 5,000 crore in the northeastern region alone. According to a study by the Cane and Bamboo Technology Centre in Assam, a value addition of two times can create an industry worth Rs 10,000 crore. So far, bamboo has been treated as a low value addition product, mainly due to the lack of awareness among the business community about its modern uses.
There is a belated realisation in a few Northeast states of this enormous potential. States like Mizoram, Arunachal Pradesh and Nagaland are showing interest in the economic exploitation of resources."Bamboo will totally revolutionise the state's economy," says Zoramthanga, Mizoram's chief minister. "Once it is processed, it can totally substitute the timber and I feel it is much better than timber itself." Tripura and Mizoram are out with bamboo policies, including its market potential and its benefits for the local people, which is necessary for large-scale economic progress. "A local based economy can generate employment and this can also lead to peaceful atmosphere in the Northeast region," adds the chief minister.

Similarly, Arunachal Pradesh, the most vocal opponent of the ban, now plans to use its forest resources. "We have plenty of medicinal plants, which can be marketed and also tourism can fetch money," says Mukut Mithi, the state's chief minister. "We are also rich in cane and bamboo and have banned the export of cane in its raw form so that the local industries can benefit."

But words have not matched with long-term policy implementation. For example, at a conference of Confederation of Indian Industries (CII) to develop Northeast states in 1995, only two chief ministers turned up. The project presented a three-pronged approach - geographical, industrial and cultural -for the development of the region. The plan included the development and marketing of handicrafts, agro products, opening of borders with neighbouring countries and the promotion of tourism. Nobody knows what happened to the proposal.

Similarly, the Northeast council - established to plan the region's development keeping in mind its unique socioeconomic status - has become a platform for interested fights over fund allocation. The Shukla Committee report aptly observed that modernisation and development should not "subvert the statutory features of the social collections operating at the grassroots in tribal areas, nor destroy biodiversity through indiscriminate propagation of uniform varieties for the short term profit of the corporate sector". State governments have long forgotten the Shukla Committee recommendations.

As the debate continues, the Northeast must stamp the decision: log out of forest bureaucracy and log in to local-based prosperity

THE big question is whether the ban has boomeranged. "People are now resorting to illicit activities by burning pine trees to produce coal," says H S Lyngdoh, the former minister of forest of Meghalaya. At the same time, many see no reason for preserving forests if they can no longer derive any financial benefit from it. According to Lyngdoh, jhum fields have increased, though there are no clear estimates. Jhum, or shifting cultivation is blamed for large-scale deforestation in the region. Says P S Ramakrishnan, school of environmental sciences in Jawaharlal Nehru University: "Imposition of the ban will not prove successful unless a sensible alternative to jhum cultivation is introduced." He stated that the Supreme Court imposed the ban with good intentions but many crucial issues have to be dealt with first.

On the other hand, the ban has not affected some from continuing their illegal ventures. As recently as 2000, the Special Investigation Team constituted by the MEF conducted random inspection and confiscated as many as 202 wagon loads of timber near Tinsukia and Delhi. Of this, substantial amount of illegal timber had no hammer marks. Fake, tampered and expired transit passes were also used. The Assam forest department claims that it is not involved in felling activities except for the dead and dry timber and the raw material for its 427 timber-based industries was from the seized illegal timber allotted to these factories. However, the HPC report stated: "This means that the forest department indirectly encourages illicit felling on a big scale."

Though the intensity has declined considerably the illegal operations continue. Many wagons of timber still pass the North Lakhimpur Rangia junction, daily. "This illegal activity happens right in front of the forest officials, but nothing is done about it," says Gautam Uzir, an advocate. A complaint was filed against the officials, but no action has been taken so far. "Imposing a ban is not enough, there should be strong enforcement and implementation," says Bibhab Talukdar, director, Aaranyak, a Guwahati-based NGO.

Though the restriction has come as a shock to many, it is also been widely appreciated. "The ban should have come three years back," says Wangki Lowang, an MLA from Deomali division of Tirap district in Arunachal Pradesh. Hari Dasan from the State Forest Research Institute at Itanagar in Arunachal Pradesh explains that the vegetation is already regenerating due to the fertile soil condition of the region.