To ensure food for tomorrow

Rice and wheat yields are falling. To check it a new initiative has been taken

To ensure food for tomorrow 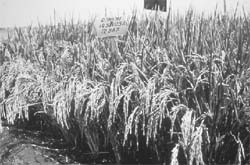 finally one can see some action. A lot has been said about the falling agricultural productivity in the Indo-Gangetic Plains ( igp). An inititative is on to check the decline in yields of rice and wheat in the area.

States such as Punjab, Haryana and Uttar Pradesh, which have traditionally been non-rice-growing states, as well as Bihar and West Bengal, two traditional rice-growing states, fall in the region. Three-fourths of the area under rice cultivation in India and more than half of the area under wheat cultivation falls in this region. This production system contributes about one-third of India's total cereal produce. About 95 per cent of government procurement of wheat and nearly 60 per cent of rice is from this fertile region.

It is the impressive performance of the system in igp which has contributed largely in achieving self-sufficiency in case of foodgrains in India. The foodgrain production increased from about 90 million tonne in 1964-65 to about 190 million tonne in 1994-95. Arable lands in igp are intensively cropped. There is little scope for crop acreage expansion. More of marginal quality lands, such as the alkaline soils in the northwestern igp and poorly drianed lands in the eastern part of the igp which remain fallow during winter, can be used efficiently. Land being scarce, new technologies are required to make the use of inputs more efficient. It is estimated that a growth of about 2.5 per cent per year over the next 20 years will be needed to meet the food requirements.

Praduman Kumar, professor of agriculture economics at Indian Agricultural Research Institute in New Delhi, says, "The country has to meet the growing foodgrain requirement of 294 million tonne by the year 2020. About 122 million tonne of this is rice and 103 million tonne is wheat. And if this target is to be met the igp will have to contribute in a major way."
The 12 million hectares of land, producing spectacular amounts of food grain in South Asia as a result of the Green Revolution, is now showing signs of fatigue. Unlike in the early years of the Green Revolution, the growth rates of rice and wheat yields per hectare have been decreasing in the recent years. It would seem that the peak yield growth rates of 10-12 per cent each year, achieved during the revolution, are part of history. Due to the deterioration of soil quality and water depletion, among other things, the yield has declined. Water induced land degradation has become a problem. The yield is being further reduced by pests, plant diseases, and weeds.

Prabhu L Pingli, director of the economics programme at the International Maize and Wheat Improvement Centre ( cimmyt) says "Intensive cultivation, slackening of infrastructure and research investments, reduced policy support and degradation of low-lying areas has contributed to declining productivity growth rates."
Against this background, a meeting of the heads of the premier agricultural bodies of Bangladesh, India, Nepal and Pakistan was held in January 1993, under the aegis of the World Bank, with the director general of the International Rice Research Institute ( irri) and cimmyt . They decided to establish a collaborative body to manage research into the areas of concern. From these deliberations evolved the Rice-Wheat Consortium ( rwc ).

rwc is meant to promote research to ensure productivity and sustainability of rice-wheat cropping systems. New technologies that helps conserve agricultural resources in both wheat and rice cultivation have been evolved by the consortium. rwc's ambit is limited to the ecological boundary of the igp. It is an informal association under the Consultative Group on International Agricultural Research made up of more than 50 public and private sector members with cimmyt as the convening centre.

rwc studies the problems affecting farmers, promotes flow of information between specialists studying rice and wheat issues and finally transfers improved techniques to farmers. The major thrust of the consortium at present is to promote different technologies that help conserve the resources and which are economically and environmentally advantageous. rwc has promoted surface seeding, zero tillage, reduced tillage and bed planting, collectively called resource conservation technologies ( rct ). These technologies have multiple benefits for the user.


In the surface seeding method the seed is placed on top of the soil surface without any land preparation such as tilling. The process helps contain soil erosion and does away with the costs of tilling. The practice has been promoted in the eastern parts of India and the low-lying lands of Nepal. In zero tilling system, on the other hand, the seed is placed in the soil by a seed drill with limited prior land preparation. The tilling and soil preparation is carried out only in the rows where seeds are to be sown and not the entire piece of land under cultivation. This technology has been promoted in the higher yield, relatively more mechanised, areas of northwestern India and Pakistan.

The results of adoption of technologies have been encouraging in Haryana in India and Punjab in Pakistan. In the year 2000, farmers in Haryana used zero tilling method on 8,000 hectares. Direct drilling with locally manufactured drills was used to cultivate 5,000 hectares in Punjab, Pakistan. Raj Gupta, facilitator for rwc says, "The area under zero tillage has increased three-fold in the last three years and should continue to expand as the equipment becomes easily available to the farmers."

N S L Srivastava, assistant director general for engineering at Indian Council of Agricultural Research in New Delhi, says that, "The farmers have saved about Rs 2,000 per hectare, reduced irrigation requirements by 30-50 per cent, advancement of sowing time, lower prevalence of weeds and increase in yield by 200-600 kg per hectare." The advancement of sowing time is crucial. One, it enhances the yield. Two, it ensures the farmer a possible extra crop of rice. And three, it helps the farmer retain the casual labour at the farm, which reduces the cost of tilling.

The reduced tillage method is used when the above two tillage practices are not suitable. A two-wheel tractor prepares the soil as well as plants the seed in one operation. Chinese scientists have developed this tractor design of which several have been imported. These techniques are being adopted by farmers slowly.


However, the consortium's ideas are yet to strike rich on ground. P Hobbes, a co-facilitator of rwc , says, "We are still looking for nutrient balancing and the right fertilisers, besides searching for other crops to introduce in the rice-wheat system. We need good varieties that are resitant to insects and diseases and adapted to the new tillage options."

At this juncture, other limitations also exist. Once created, new technology must be disseminated. Else, the entire effort becomes purposeless. The consortium has been lax in this regard. Extending benefits of emerging technologies is essential. But the potential is evident. According to rwc estimates adoption of these methods could save as much as 5 billion cubic metres of water and 0.5 billion litres of diesel. The saving of diesel can lead to reduction of 1.3 million tonne of carbon dioxide emissions which can cause global warming.